Salmon: A Fish, the Earth and the History of Their Common Fate (hardcover book published by Patagonia) 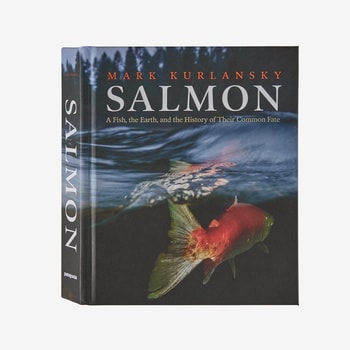 Salmon: A Fish, the Earth and the History of Their Common Fate (hardcover book published by Patagonia)

From Mark Kurlansky, bestselling author of Salt and Cod and many other works, a fascinating tribute to a magnificent species whose cycles of life are entwined with every aspect of nature— freshwater, saltwater, and land—and whose survival is inextricably tied to the survival of the planet.

Note
Purchase an eBook for Kindle, Nook, iPad and most other devices for $14.95. Note: gift cards are not valid for eBooks.
Salmon is also available as an audio book wherever audiobooks are sold.

Your reviews help us improve our gear. Take a few minutes to tell us what you think.

Orders are shipped within 1-2 business days and arrive within 3 business days (up to 5 business days for remote addresses). Please keep in mind that we get backlogged during sales or the holiday season and it could take longer. If you have any questions about your order, please contact our friendly Customer Service team and we'll be glad to help.

We accept both current season and sale items for return for a flat-rate fee of C$19. We do not set a time limit on returns, though we ask that returns for fit or color be made in a timely manner and that items be kept in new condition with tags attached.

We Guarantee Everything We Make

If you are not satisfied with one of our products at the time you receive it, or if one of our products does not perform to your satisfaction, our Ironclad Guarantee allows you to return it for a replacement or refund at no charge. Damage due to wear and tear will be repaired at a reasonable charge.