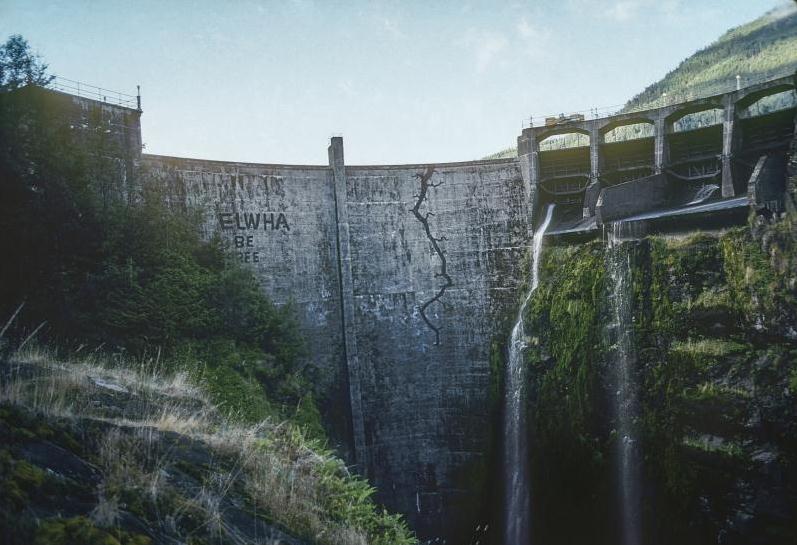 It’s difficult to put into words exactly how it feels to experience the newly free Elwha River. Gratitude, for sure, for all the people and organizations who put so much into bringing the dams down. And awe, as nature takes over and the river finds it’s new-old path to the sea. And fun, of course, to be there taking it all in with my good friend and DamNation producer/underwater photographer, Matt Stoecker.

We floated the Elwha under crazy blue skies and warm air, with the winners of the Patagonia/DamNation photo contest and our gracious hosts from Olympic Raft & Kayak. All around amazing experience. Despite what the dam-removal critics said, the sediment load in the water has settled out quickly, leaving the water clear, with the slight milky, blue-green tint one expects of a glacial river in summertime.

As we came into the former reservoir zone above the lower dam site, I was blown away to look up 40 feet above us and see the old water line still clearly defined on the rocks and trees. It was like finding a river at the bottom of a lake, which is essentially what’s happened here.

At the actual dam site, after much discussion and scouting, we decided to become the first commercial trip Olympic Raft & Kayak had taken down through what they’ve named That Dam Rapid. A short, steep, highly technical Class 4 drop through what used to be Elwha Dam proved to be as hairy as it looked, and provided plenty of adrenaline to jolt us out of the all the dreamy wonder and gratitude we were feeling. Great ride, and a perfect end to the float. 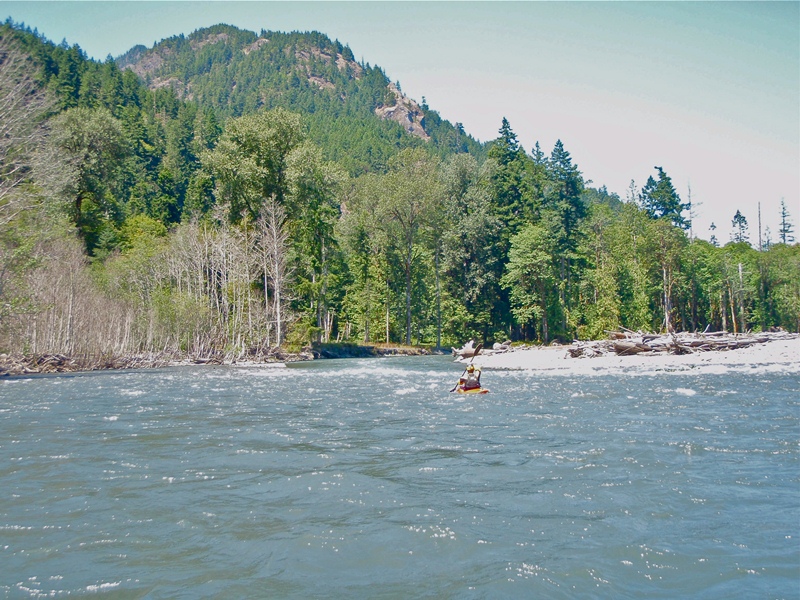 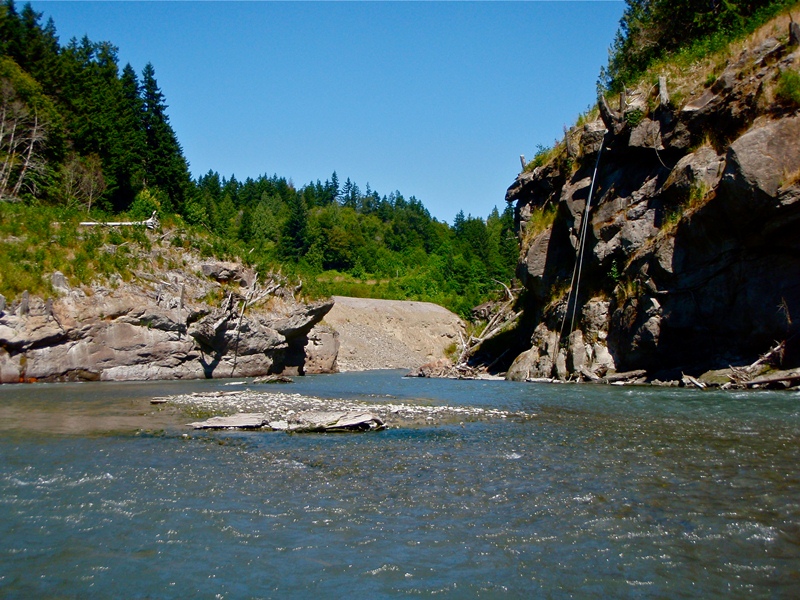 The earthen berm where the Elwha Dam once stood, viewed from just upstream. Photo: Dylan Tomine 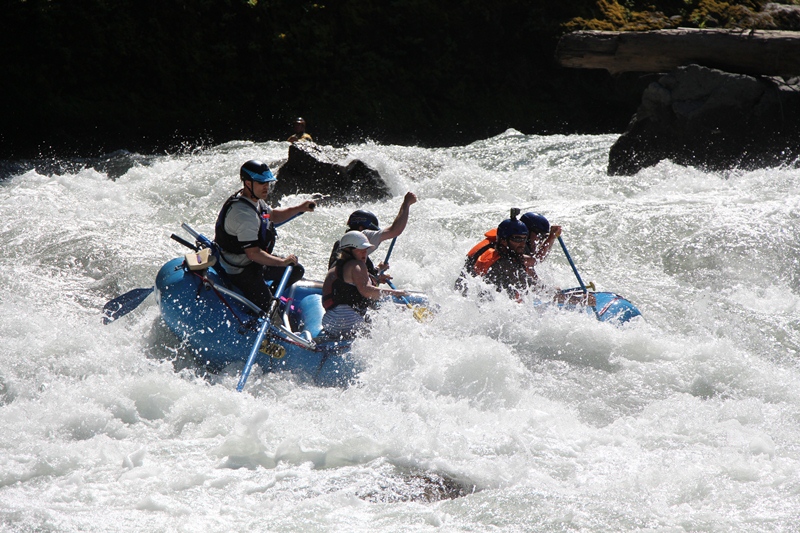 Shooting the newly named That Dam Rapid (IV) at the former dam site. That’s me in the port bow, shortly before getting launched. Photo: Olympic Raft & Kayak

That night, Olympic Raft & Kayak hosted an outdoor screening of DamNation in the warm and amazingly, for the Olympic Peninsula, dry summer night. Mikal Jakobal, the activist who painted the now-famous crack on the dam here back in 1987, made a surprise appearance, much to the crowd’s delight.

Finally, the next day, Matt and I drove down to the where the Elwha runs into the Strait of Juan de Fuca. This was, perhaps, the most tangible evidence of a river reborn, and an uplifting view of what a free river is supposed to do. Instead of the river channel running straight into saltwater along a sterile, clean-cobble beach as it once was, the Elwha had built a tremendous delta. Sediment, trapped behind the dams for 100 years, is now creating a complex system of barrier islands, sloughs, ponds and wetlands. The most perfect juvenile salmon habitat imaginable. We stood there in the wind, absorbing what it all means and feeling the uplift of a rare and valuable victory. 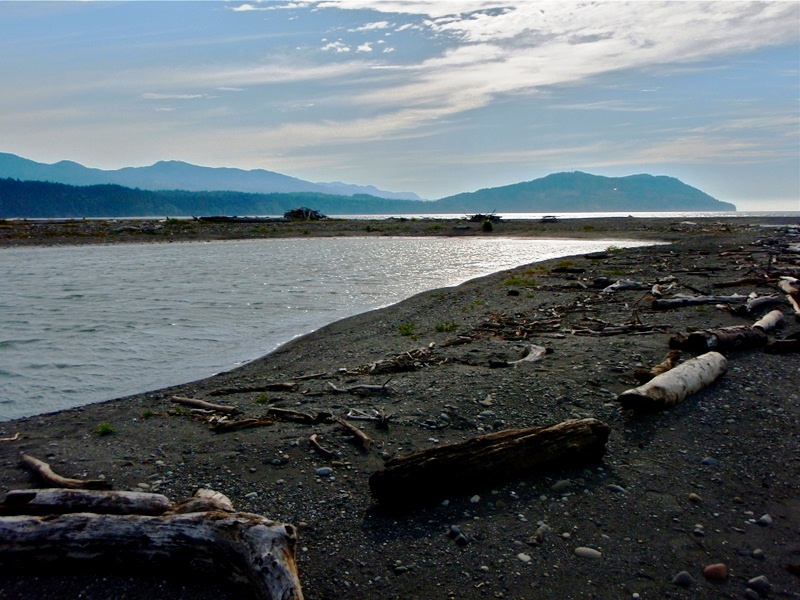 Thanks to everyone who entered DamNation film’s #thatdamcontest. There were a ton of entires and we struggled to pick a winner. Here are the photos from the finalists and eventual winner, @mikfish.

Grand prize winner @mikfish. We chose this photo not for what it shows, but for what it hides. Submerged below the waterline is Hetch Hetchy Valley a place described by John Muir as “one of nature’s rarest and most precious mountain temples.” The valley can be restored to its former grandeur if O’Shaughnessy Dam is removed, and our friends at Restore Hetch Hetchy are working to make it happen. Please join them.

You can browse all of the entries at damnationfilm.com/contest.

Dylan Tomine is a Patagonia ambassador, fisherman, producer of the film Artifishal, and author of Closer to the Ground: An Outdoor Family’s Year on the Water, in the Woods and at the Table. He lives with his kids and their furry, four-legged buddy Halo on an island in Puget Sound.