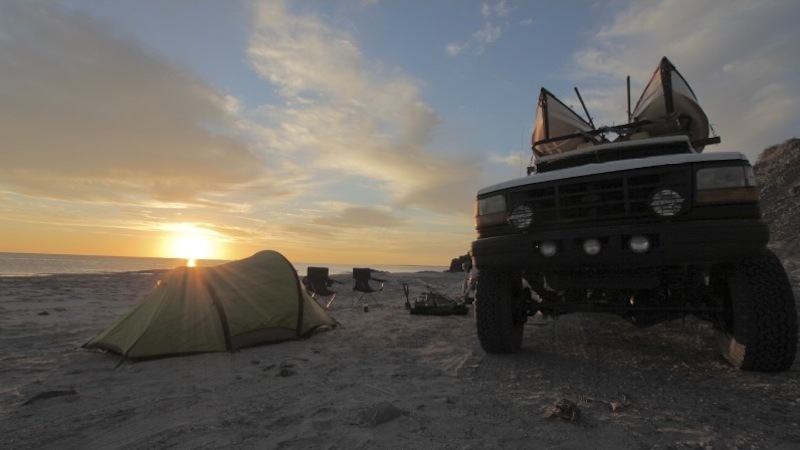 When last we left the fly-fishing filmmakers of MOTIV Fishing, they had converted a mid-'90s F250 to run on used vegetable oil and successfully crossed the Mexican border. Today, we pick up their scent in Baja as they continue traveling south in their pursuit of tight lines.

Over 2500 miles behind us and we were still truckin’ on used veggie oil! Our F250 truck ran smoother, quieter, and depending on which 55gal drum we suck waste oil from to fill our veg tank, we either smelled like an Italian, Sushi, or Chinese buffet when we rolled down the highway. Brian swears that he saw people in the tail lights chasing us with knives and forks at times. The exhaust fumes alone have probably packed an extra 10-pounds on each of us, but we wouldn’t have had it any other way. The money that we saved by not having to purchase much diesel for the trip has easily paid off the initial expense of the vegetable oil conversion.

[Above: Morning shot of the truck. All photos: MOTIV Fishing.] 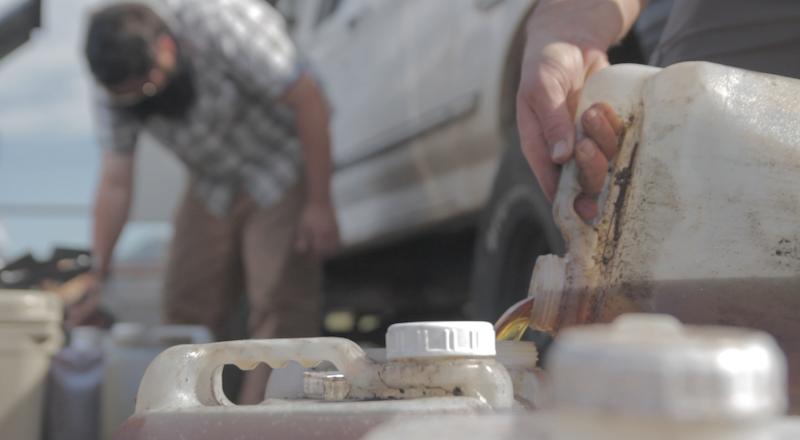 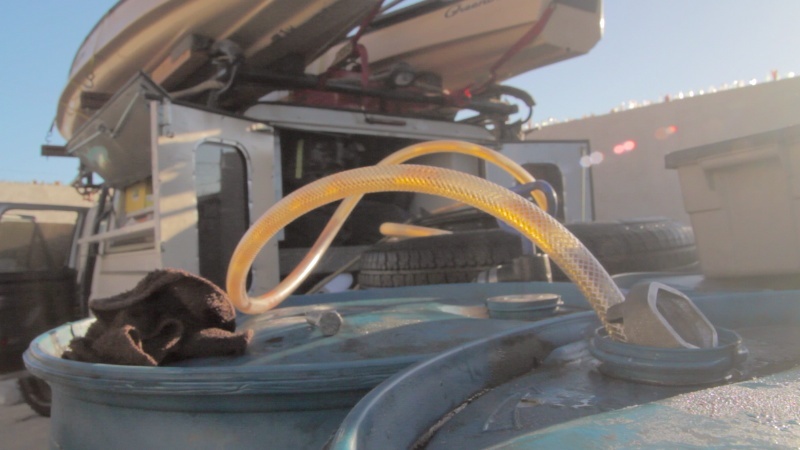 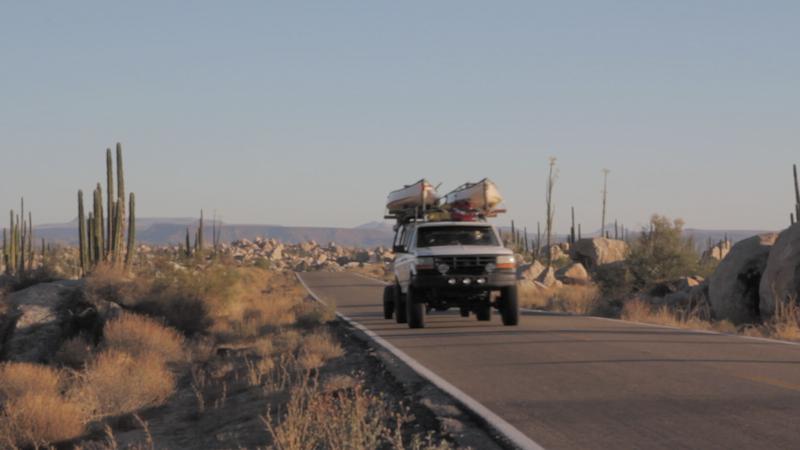 Traveling down the entire Baja Peninsula was an unbelievable experience, but it wasn’t always peaches and cream. We had over 20 mechanical malfunctions with our truck engine alone. Many nights were spent sleeping outside of a mechanic shop or an auto-parts store waiting for them to open so we could buy a stupid engine part that we should have purchased before we started this trip as a back-up. Our Spanglish was sounding more and more like Spanish everyday, and we had mastered the art of communicating with our hands through a game of charades. 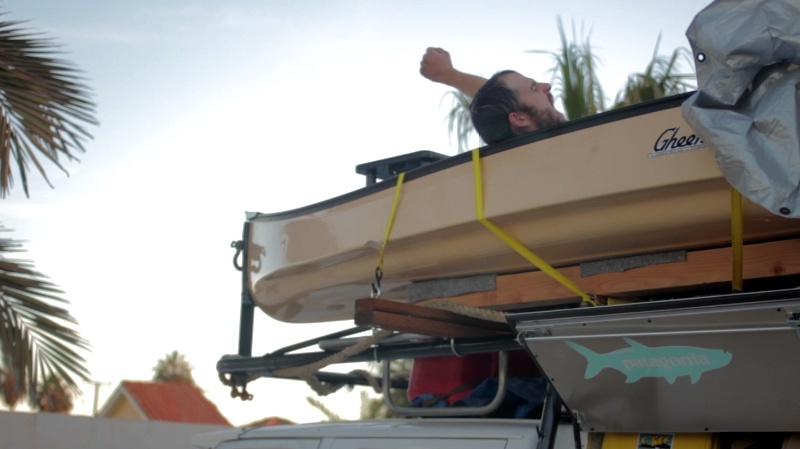 [Sleeping in the boat.] 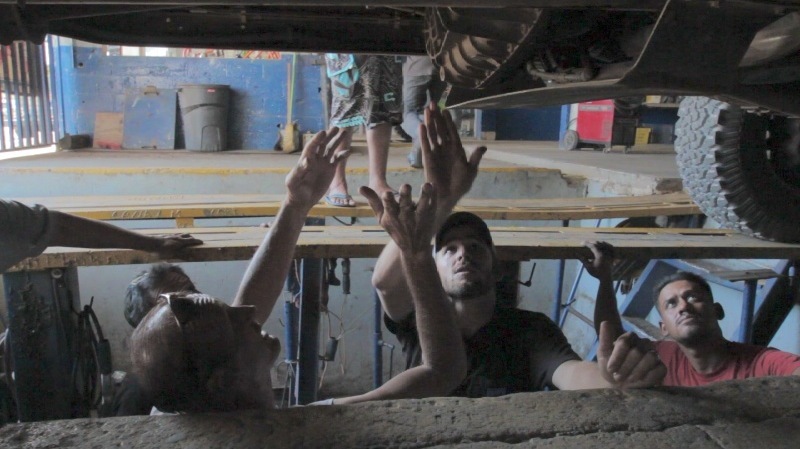 On the upswing of things we met some unbelievable people and had some unforgettable experiences along our journey through Baja. A memory that none of us will ever forget was when we were lost on a remote section of Baja’s coastline looking for a place to set up base camp. We were tired and hungry and had just come off of a grueling, long road trip across a hellish section of Baja when we stopped to ask for directions at a remote fishing camp and a family opened their doors to us. 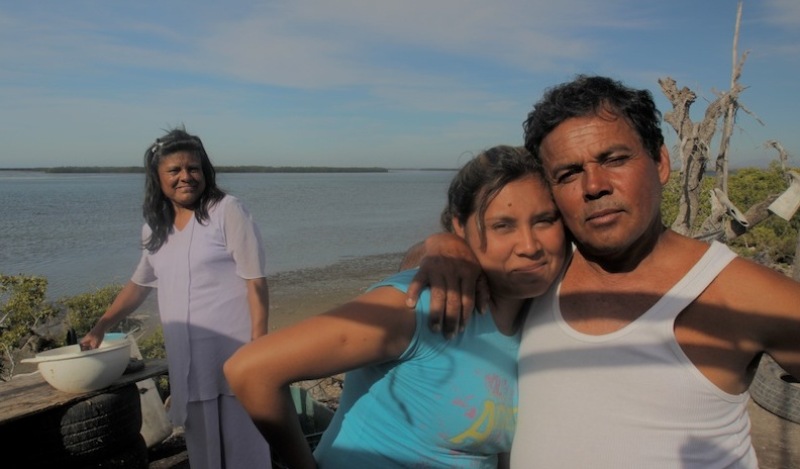 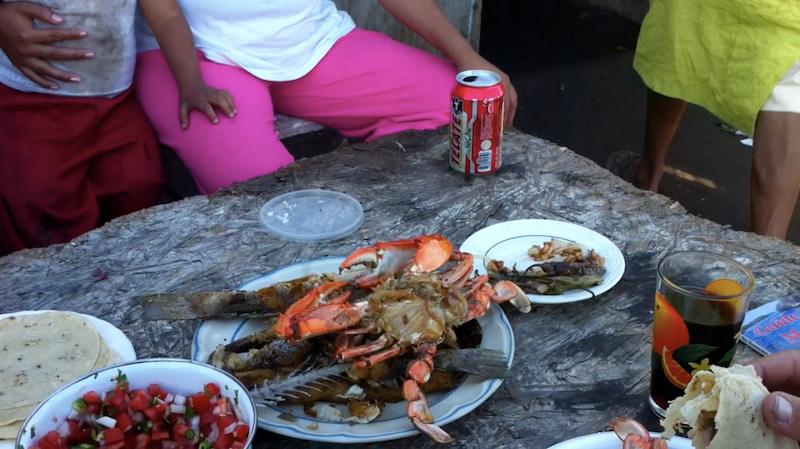 They treated us like family and fed us like kings! Who eats shrimp for breakfast?!! We did… and we ate a TON of it! Crab for lunch and let’s not forget lobster for dinner! The gluttony lasted for more than a week but we soon had to cut our ties. Tears were shed as the f2Veggie pulled away. 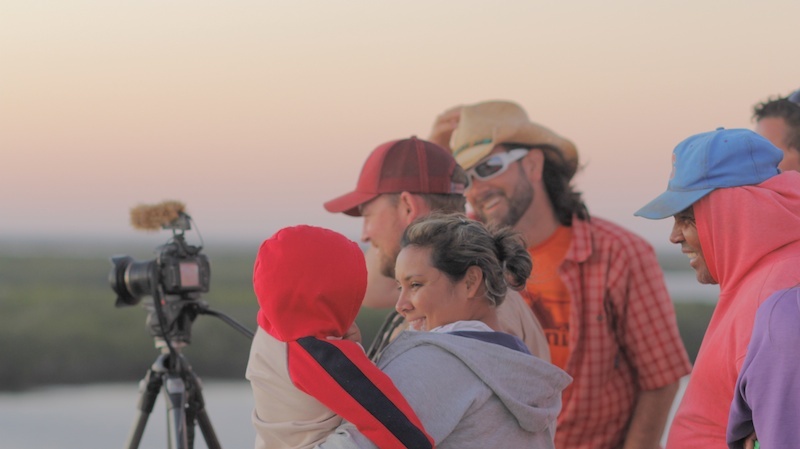 Another fond Baja memory happened when we were stuck in a small coastal town trying to access a legendary offshore striped marlin fishery. None of us had ever caught a striped marlin, but our early research on the area indicated that the marlin schools could be located anywhere within a 72 square mile radius of where we were. Only a few minor speed bumps would lie in our path: 1) finding someone with a boat 2) convincing them to take us out in their boat and 3) locating a striped marlin to catch with a fly rod. Most sane people would have chosen an easier way to get to these fish, but that would take all of the fun out of it. 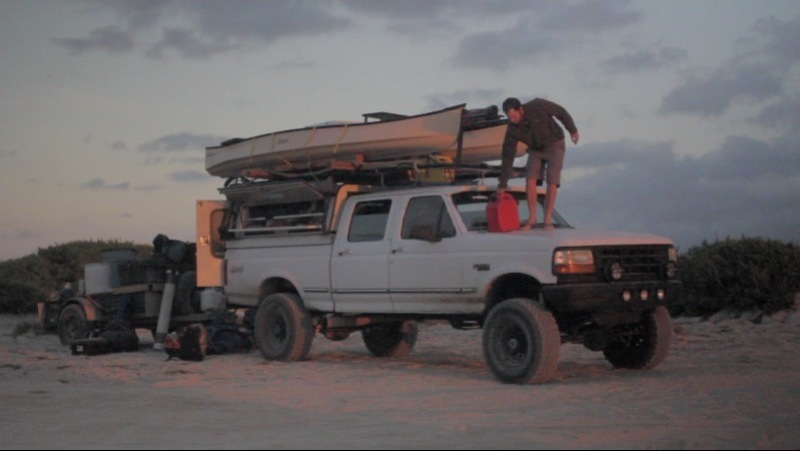 Blending in wasn’t exactly the easiest for us and in this small coastal town we stuck out like an infected sore thumb. It’s not every day a gypsy wagon like ours rolls through town. Local law enforcement hassled us morning and night about our camping locations, and the untamed facial hair that sprouted from Jay’s face quickly dubbed him the nickname Chup with the locals, which we later found out was short for Chupacabara. 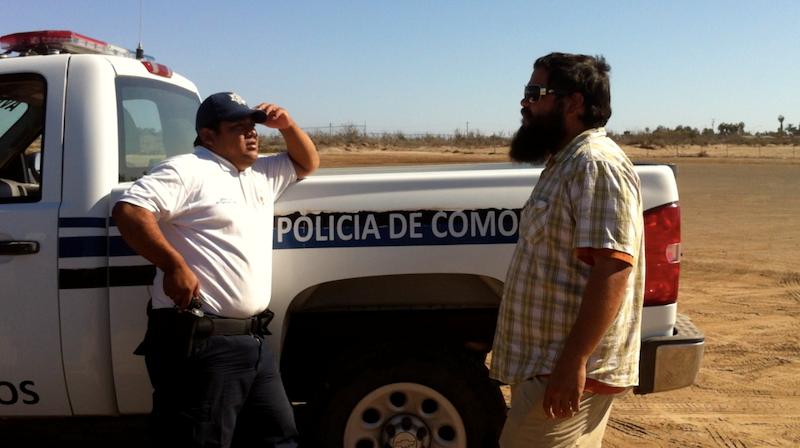 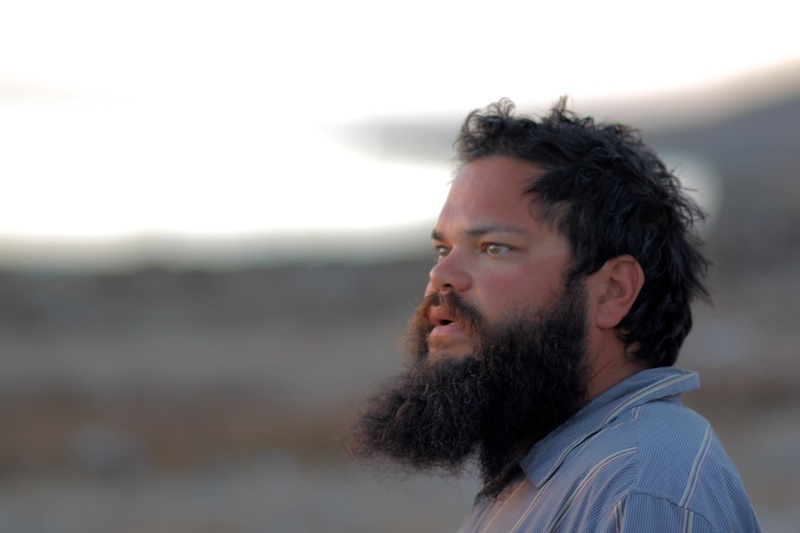 After a dozen failed attempts trying to persuade local fishermen to take us offshore in their boats, we stumbled into a gentleman by the name of Bob Hoyt. Meeting Bob was truly a gift from the fish gods! Originally from CA where he was a prized offshore bill fisherman for many years, he has since relocated to the quiet confines of Baja’s remote coastline to manage an eco-outfitting operation from a remote island offshore. It was on this island that Bob knew of a lobster fisherman that could help us out on our quest to chase striped marlin in the blue water. Getting all of our cameras and fishing gear to the island would be a whole new fiasco. 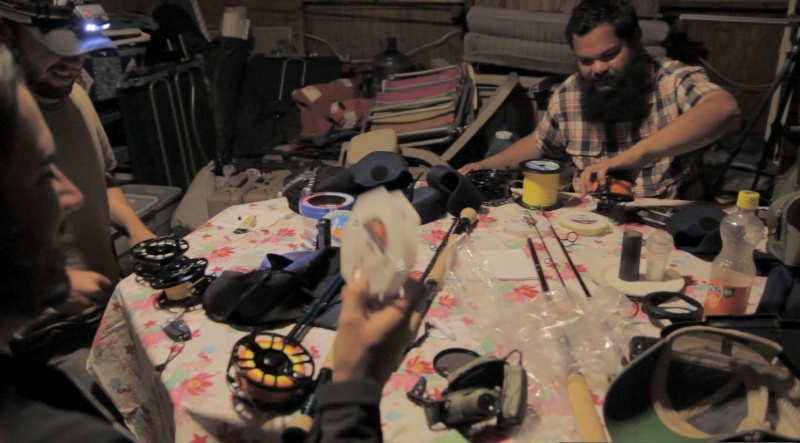 In the morning we carried load after load down a long pier and stacked it on a transport barge that Bob fabricated in his garage. The ride was short and when we arrived, an old Suburban was waiting to shuttle us to the other end of the island. While driving down a remote section of coastline we saw remnants of old boat wreckages and the remains of two blue whale carcasses that had washed ashore! 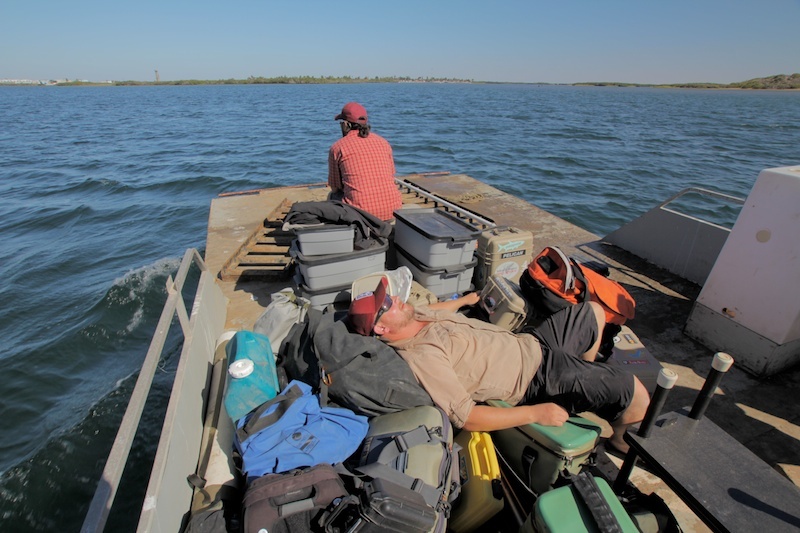 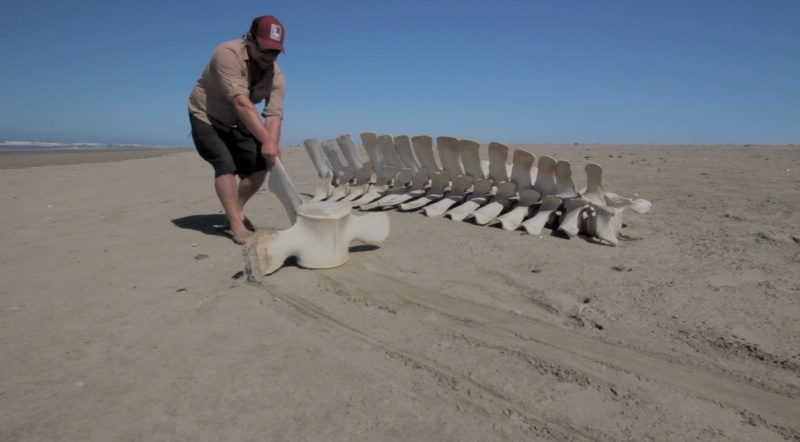 What happened offshore over the next two weeks was a phenomenon that we’re saving for the film's release this spring. But what we can share with you is that it was a jaw dropping “Planet Earth” experience that included several of the ocean's top predators converging on one food source. The ocean's surface erupted while hundreds of sea lions, dolphins, killer whales, and striped marlin furiously gorged on huge schools of sardines that annually migrate to these waters each year. 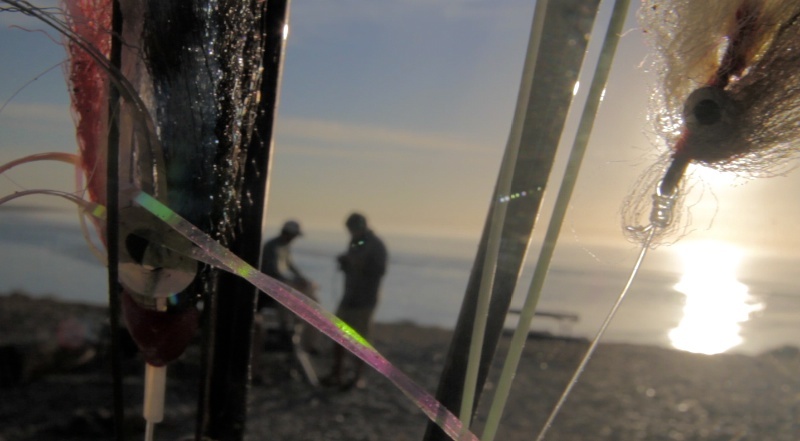 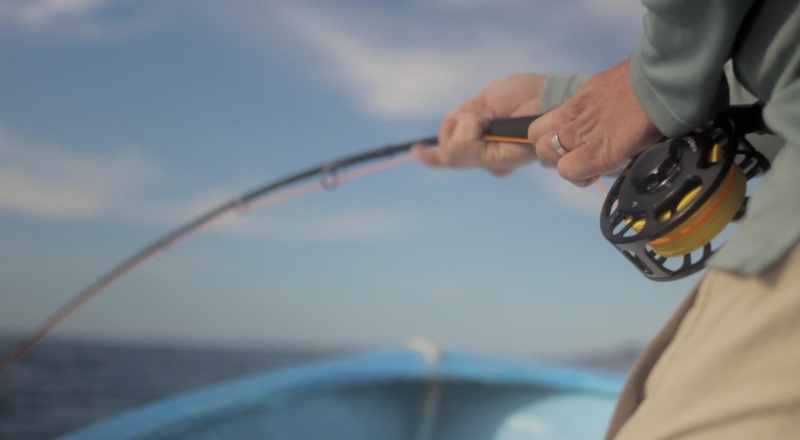 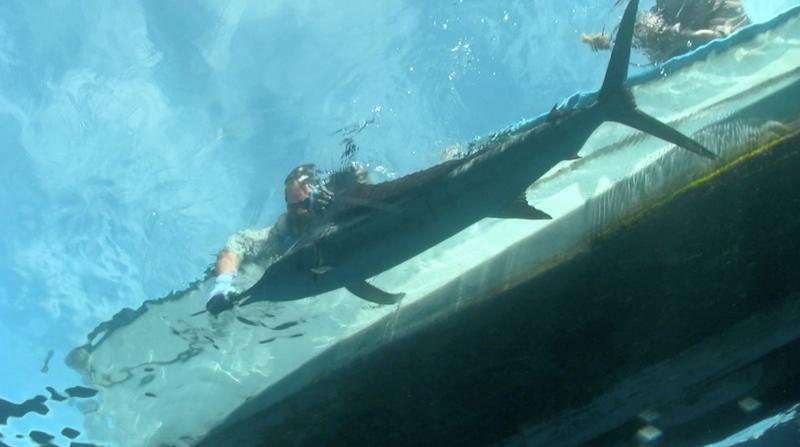 Between cops in the city of Loreto trying to charge us 10,000 pesos for spilling veg oil on the street to the sight and sound of a fly reel spinning at Mach-3 speeds while a marlin takes you deep into your backing, our overland journey across Baja was nothing short of incredible. There were a few minor setbacks at times… but setbacks seem to always keep the adventure rollin’ right along! 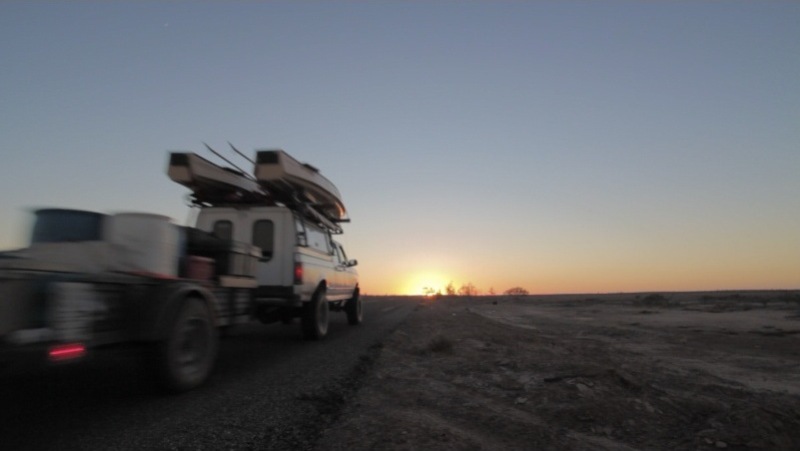 [Driving into the sunset.]

Visit www.motivfishing.com to learn more about the crew and read their blog. You can also follow their travels on Facebook.