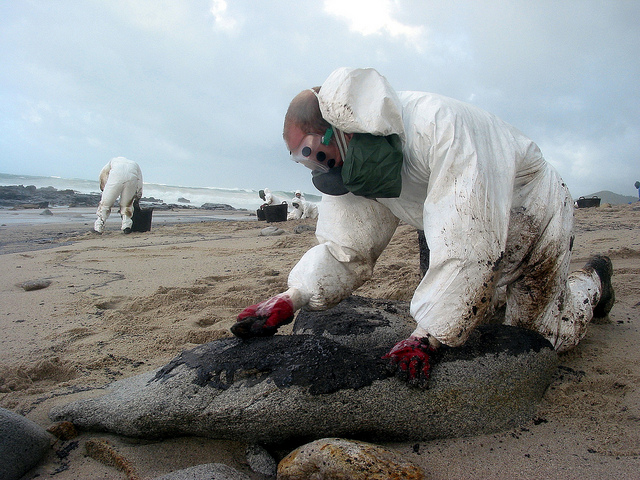 We are constantly reminded that our oil-based consumer society, with our excessive use of plastics, obsession with air travel and inefficient ways of heating and lighting our homes, will eventually lead to environmental suicide in the form of global warming and resource depletion. But for many people, including surfers, global warming and resource depletion are a little hard to grasp; because they are difficult to actually see happening. However, our addiction to oil is one of the ultimate causes of another, much more tangible effect: when oil that is being transported spills into the sea and arrives on the coastline.

Almost exactly ten years ago, the Prestige oil spill occurred off the coast of Galicia, in Spain, very close to where I live at the moment. It was the worst environmental catastrophe in the history of Spain and Europe, and I don’t think it should be forgotten. So I apologize in advance if you find this article a little gloomy.

Galicia is a province in the far northwest of Spain. Some say it is the forgotten corner of the Iberian Peninsula, the last outpost before the Atlantic Ocean. The granite topography, constant rain and year-round cold water give the place a harsh beauty and ensure its beaches and waves will never be overcrowded. A wide swell-window and countless spots facing all directions mean that the surf here is consistent and of high quality. Apart from around the more populated city areas, you might find yourself looking for someone to surf with, even in summer. Most surfers still prefer the easy access, warm water and reliable weather of France or Portugal.

In the far northwest reaches of Galicia lies La Costa da Morte. This extraordinary stretch of unspoilt coastline is blessed with empty white-sand beaches, crystal-clean water and one of the highest yearly average wave heights in the North Atlantic.

The people of the Costa da Morte are as hardy as the granite rock that permeates every headland. Many of them are percebeiros, collectors of percebes or goose barnacles. This involves clinging onto the rocks in all weather and wave conditions, painstakingly picking off the shellfish, one by one. About five thousand families live exclusively from the sale of percebes that they have collected themselves. You could say that, compared with most jobs in modern society, being a percebeiro is perhaps a little more sustainable and more in balance with Nature. 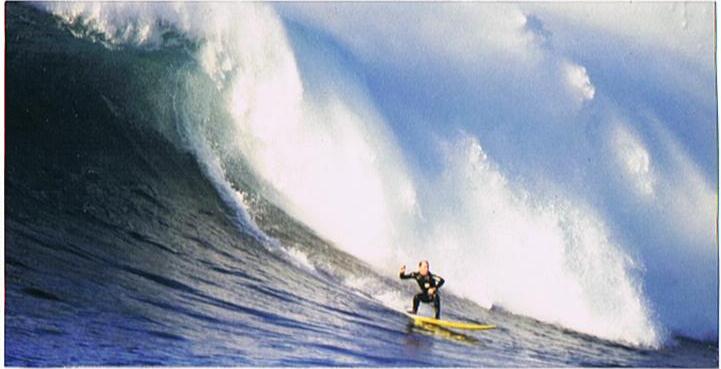 Until June 2003, all fishing was banned along Spain’s Atlantic coast. Hundreds of fishing boats were converted into oil-collecting vessels, the fishermen themselves scooping up the slicks with giant spatulas. The oil was carried back to shore aboard the boats in green dustbins. This method was acknowledged as much more efficient than letting it arrive on the beaches first, then painstakingly having to clean almost every grain of sediment. None of the research into high-technology oil-spill recovery methods that must have been done (?) over the fourteen years since the Exxon Valdez oil spill was made good use of in Spain.

At first, people were unsure about whether to go surfing or not. Many decided it just wasn’t worth it, what with the unknown risk of the contamination, in addition to the cold water. From January to March 2003 – peak winter season in Europe – line-ups were empty. In France, the authorities even decided to hand out fines to those attempting to go surfing. Even during winter 2003-2004, more than a year after it happened, I remember paddling out at a beach almost a thousand kilometers from where it happened, and coming out covered in stinking brown-black stains. The list goes on.

Within the remoteness of the Costa da Morte, lies the even more remote fishing village of Camelle. A few meters from the water’s edge at Camelle are the remains of a tiny hut, in which lived the first human victim of the Black Tide of the Prestige. Among the many hundreds of thousands of birds and mammals that needlessly perished, most people agree that Manfred Gnädinger died as a direct result of the Prestige. He was murdered by the people responsible.

Manfred was known to everyone in the village simply as ‘Man’ or El Alemán (the German). He arrived in Camelle one day in 1962, from Dresden, Germany. Nobody was sure why he came. They knew he was a well-educated man, always polite and courteous, but they knew little more. Many people believe he came to Galicia disillusioned with the western world. Whatever the case, after staying in Camelle for a short while, he decided to opt for a different kind of life. Man spent the next 40 years living alone in that small hut, just a few metres from the raging Atlantic Ocean.

Man lived a simple life: no car, television or mortgage, no telephone, no stress. He created an open-air art gallery, full of stone sculptures reminiscent of, perhaps, Gaudí. The gallery was his pride and joy, his very livelihood. The small income he needed to survive was drawn from the 100 pesetas [about $1] each tourist was asked for the privilege of browsing his works of art. He was a kind, gentle person who caused no hassle to anybody. He wanted little out of life, except to be allowed to continue with his artwork. His modest lifestyle was not detrimental to his health – he could be spotted swimming great distances in the frigid Galician waters, even into his early sixties.

On 18th November 2002, Manfred woke up to the stench of crude oil. His precious art gallery, yesterday a beautiful garden of multi-coloured sculptures, was now a thick mess of black tar. There was no hope of recovering it; the oil from the Prestige had penetrated deep into his life’s work, into his home and into his soul. On 28th December 2002, just over a month later, Manfred was dead.

“Morreu de melancolía”, say the locals. He died of sadness, lost hope, a broken heart. After the black tide of the Prestige, he simply gave up the will to live. He may have already been sick, nobody really knows, but what is clear is that the Prestige finished him off.

Man was an integral part of the Costa da Morte, a land where many people still live in equilibrium with Nature and are not destroying their own resource base. The world of greed and excess has always been snapping at the heels of Galicia but has hardly managed to take a hold, perhaps due to the harsh environment. Throughout forty years, Man had escaped the modern world with its gluttony and overindulgence, the world he had left behind in 1962. When it burst through his front door and trampled all over him, he must have thought it had been chasing him the entire time. 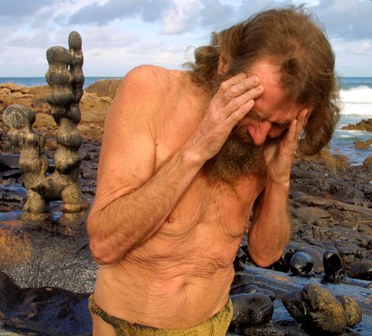 Many people may have thought Man was primitive because he didn’t own a TV or a washing machine, didn’t drive around in a car, and didn’t fly half way around the world every week to talk to about money. However, his relinquishment of the trappings of modern society perhaps put him on a slightly higher plane than most of us. He managed to avoid not only vanity, greed and materialism, but also aggressiveness, territorialism and xenophobia: traits all too prevalent among so-called sophisticated people.

The death of Manfred is not just another unfortunate incident to be forgotten. It is highly symbolic. Manred and the Costa da Morte are the antithesis of the Prestige and all it stands for.