I gotta dig down, I gotta go monk. Ever seen Zoolander? Of course you have. Me, too – about a hundred times. It’s a hilarious spoof on the world of male modeling, and there’s that classic scene of the “walk-off” challenge when, between rounds, Hansel digs deep and pulls out what’s needed to win the comp. Thus it seemed fitting to Jonny Copp and me, in 2003, to name our new route “Going Monk.” High on an obscure peak in the East Fork of the Kahiltna, as a storm rolled in, we continued, driven, summiting in a whiteout and fighting through a spooky descent.

I wrote about inspiration, Jonny and my love for climbing in the mountains in a recent piece, The Art of Disaster Style, published in the latest Elevation Outdoors. Funny thing is that for the photo of Jonny on our route, they wrote a serious caption referencing our route name (Jonny would have loved it!). Same with a Rock & Ice editor back then, when they did a news piece and the editor asked, “Did you guys name it ‘Going Monk’ because you saw God?” Me, completed flummoxed: “Nah man, haven’t you seen Zoolander?”

Flash forward to ten days ago: Justin Woods and I sit on a ledge 12 pitches up the Eye Tooth. Massive avalanches roar through the cirque, crashing down from the mid-day heat melting the snowpack. Alive. We’re totally safe, out on a pillar, though Justin hacks like a smoker – or, to extend the Zoolander thing – a longtime coal miner.

Black lung and all, Justin Woods leading on the west face of the Eye Tooth, Alaska. Photo: Kelly Cordes

Another rumble. “I think I got the black lung, dude,” Justin says between hacking fits. Sounds like he has walking pneumonia. He’s sick as a dog.

Sun sparkles off a snow patch on the ledge, and I bring a handful of snow to my lips, kick back and gaze across the expanse of the Alaska Range. Crevasses lace the approach glacier 2,000 feet below. I look out at this landscape of contrasting rock, ice, jagged spires, mountains, seracs, violence and beauty capped by whisps of clouds. 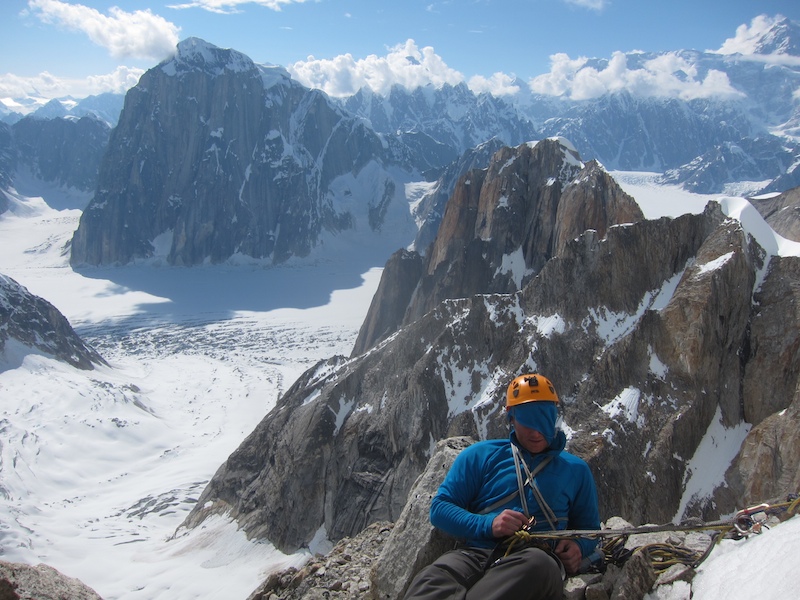 A decade ago I’d have pushed on. Maybe talked Justin into pushing on, too. (Jedi mind trick: This is not the black lung. Motivational speaker and life coach: You can do it, Champ, give it 110%!) Truth is, he’ll push on if I really want to; truth is, I don’t want to if we aren’t feeling it.

Fortunately, a thank-god storm suddenly rolls in on our descent, saving us from having to question our decision to bail (“Well, yeah, we knew that was gonna happen and we made the right call….” Ahem.).

Three days before, a simple 12-hour climbing day left my leg hurting so bad I popped a leftover narcotic painkiller to endure the ski back to base camp. Yet on this Eye Tooth thing, it’s as if I’d never destroyed my leg. No pain. Maybe I’m not old and done and broken; I’m still in the game, just like Kenny Powers. Go figure, so it goes. I find myself analyzing it less and accepting it more as time goes on. Trying to do the best I can. 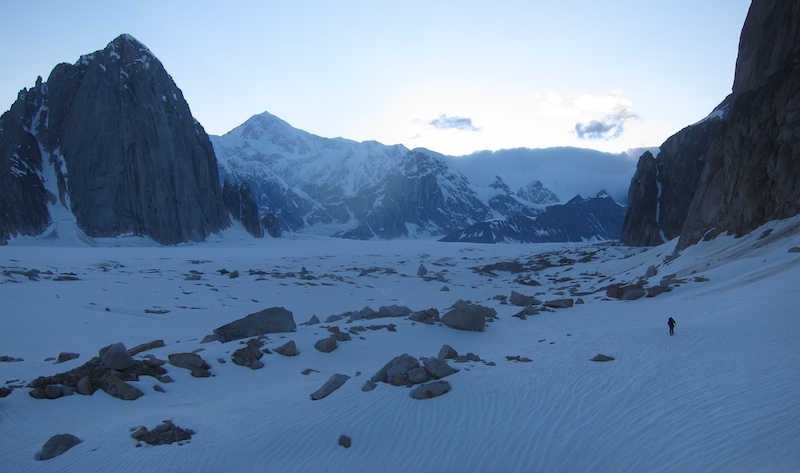 Skiing back toward base camp. Photo: Kelly Cordes

Snow crunches and slides beneath our skis. It’s a long slog back to base camp. Blue light hues the horizon at 2 a.m. We’ve been going on the mantra, “Twizzlers, tequila, beer.” My leg feels fine, twenty-some hours in. Go figure, so it goes.

And in the end, I realize that it’s all about the journey. Back at the tent I make good on our mantra, and wonder about the other definitions of going monk. 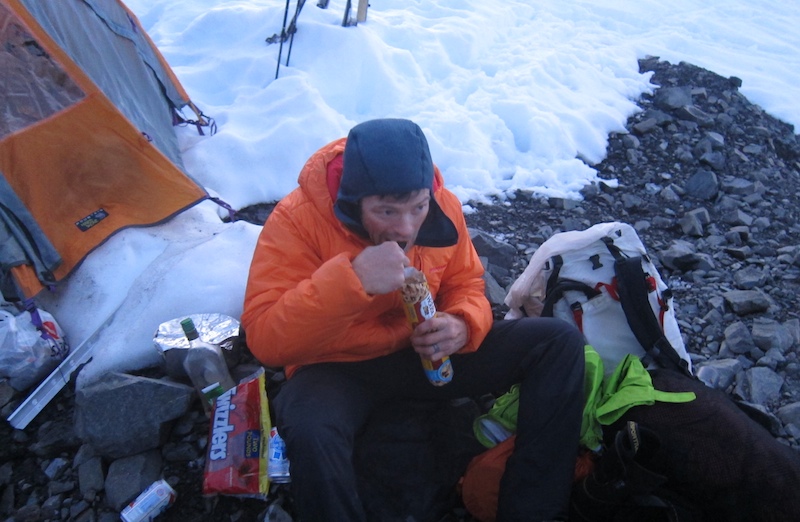 Kelly pondering what it all means back in base camp. Photo: Cordes collection