JT and I are headed to Baja tomorrow to celebrate his 40th birthday. I totally suck at surfing and I’ve had a few close calls so I’m always anxious when we go on a “surf trip.” It seems we never go someplace mellow – Peru, El Salvador, Nexpa. Isn’t that like taking a 5.4 climber up to the base of El Cap, giving her a rack of cams and saying, “off you go, see you on Heart Ledges”?

Below is a memory I have from a past trip to Nexpa.

I hate surfing and surfers are lame. I had just gotten mauled. Again. This time three feet from the shore. The water cruelly sucked me back out and then slammed me into the rocky, thinly foam-covered beach. Shielding my face from the fins of the board with one hand and frantically trying to stand back up with the other, disabled me from repositioning my bikini top. I gained the safety of the sand and panted. Breathing was difficult. A mane of hair webbed across my face and salt water poured from my nose. I pushed away the mess of hair and could see three cool-guy surfers on the porch of their bungalow, staring and snickering. Assholes, I thought. Then I remembered. I yanked my top back into place and stomped off. I tripped over my leash, still attached, and noticed that the right triangle of my bikini was inside out. 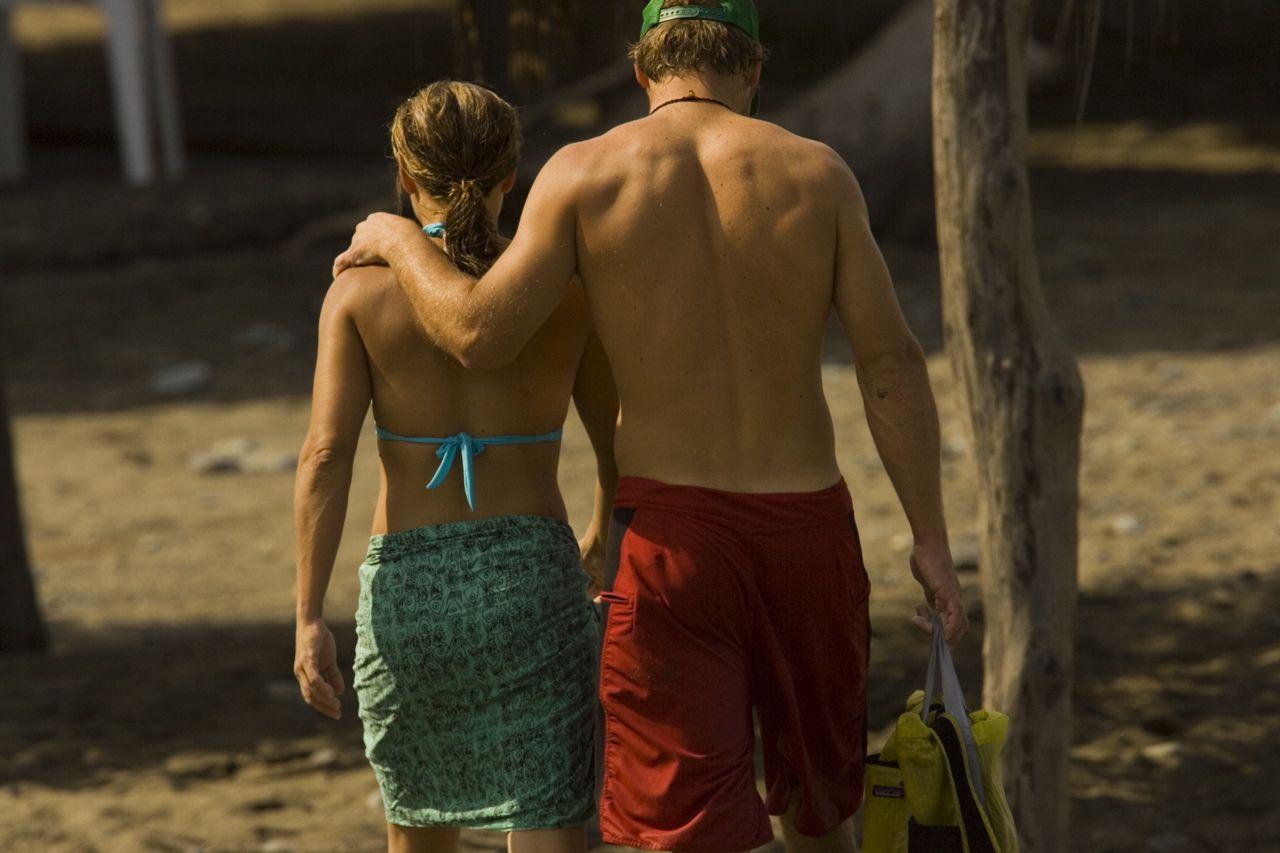 Pouting in a hammock, I watched Mario’s (the owner of the cabanas) sons returning from a session in the kiddy pool section of surf. Their faces were bright and gaits jaunty. As they passed, I impulsively said/mimed, “I go surfing with you!” They looked at me a little bit funny, and then communicating with broad grins and nods, agreed. The littlest one, standing three feet tall with surf shorts hanging inches above his ankles, sprayed Spanish in an excited, high-pitched tone.

“He said as soon as they get done cleaning six bungalows, picking limes and raking the beach, they can go.”

I indulged in a lunch of mango smoothie, fish tacos and a big ‘ballena’ and sacked out in the shade. 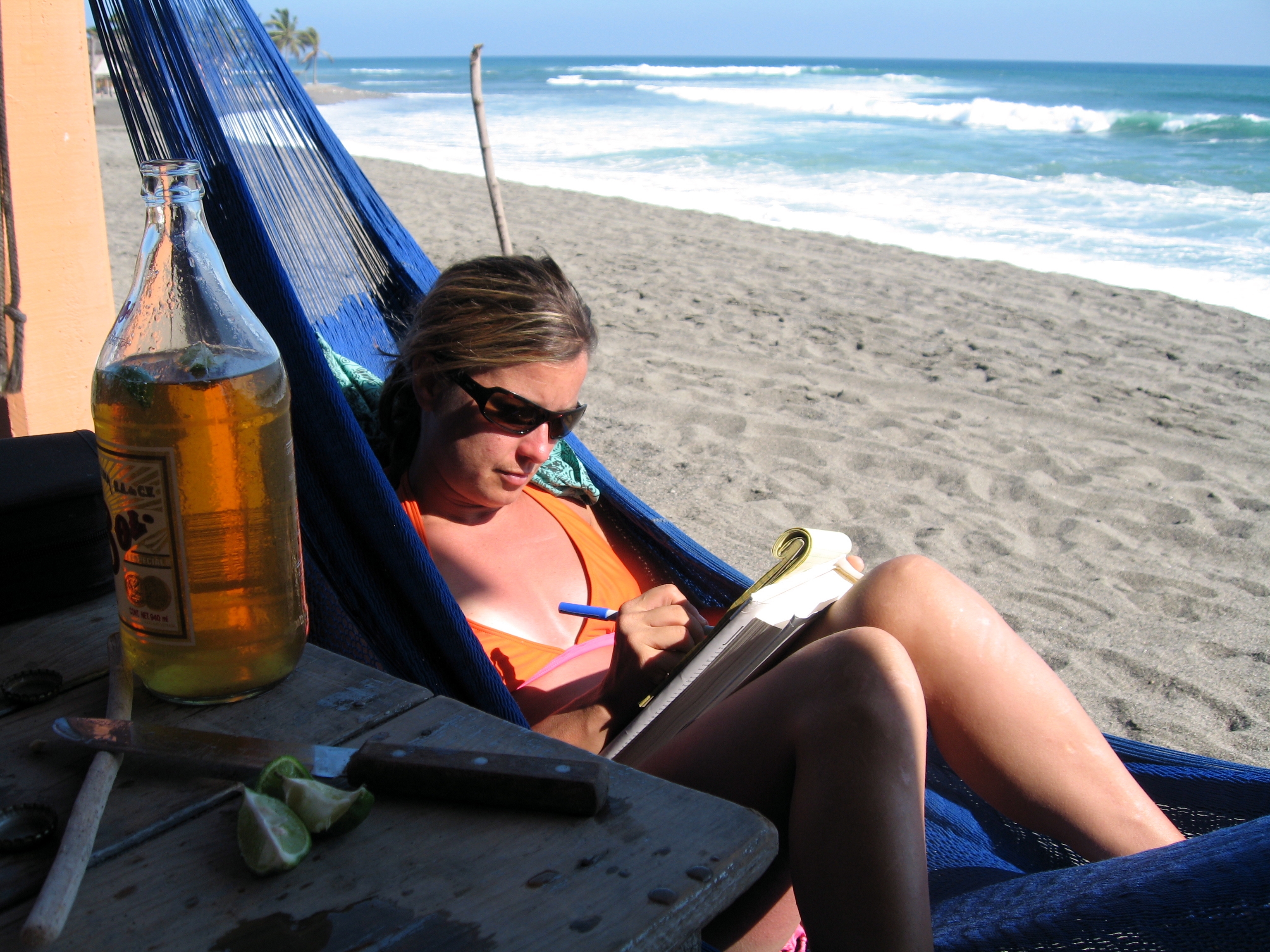 Studying Spanish? Or Transworld Surf for tips on how to look like a surfer even if you’re not? Photo: JT

“Lista?!” A pert, squeaky voice awakened me. After more Spanish and pointing, I gathered my board and followed the keen duo of Jose, the littlest one, and a slighter taller boy.

“You guys know I don’t hablo Español, don’t you?”

They lead me to a rusty and heavily dented pick-up with a bed full of boards. More youngsters appeared and piled into the back. I wondered if the reason they invited me to come along was so that I could drive. An adult relative appeared and got behind the wheel.

Bouncing along in the back of the truck, I offered my name. “Me llamo Brittany.” Quizzical expressions and pronunciation attempts followed.

“Spears!” The oldest one blurted and blushed.

The most animated of the group pointed at the only girl, a beautiful and coy early teen. “Hoy es el su primer practicar surf del dia!” She was dressed in a thrice-handed down faded rash guard and jean shorts.

The extended Mexican family plus me paddled out into the three-foot surf/backwater in a rough brigade of chipped boards, (mine was embarrassingly brand new) faded neon clothing, and a mixture of races, genders and ages. A melody of whoops, cheers and laughter, backed up by the crashing waves, accompanied us.

“Grande Olas!” Jose hollered his approval as I wobbled on a waist-high monster for all of five seconds.

No line-ups, rules I didn’t understand or attitudes. Hell, the uncle appeared amused when I almost killed him with one of my wipeouts. Hours quickly passed and it was time for dinner.

“Hasta mañana!” I said in a giddy, crude accent.

I walked back to my cabana, dragging my leash. I liked surfing. Surfers were cool. 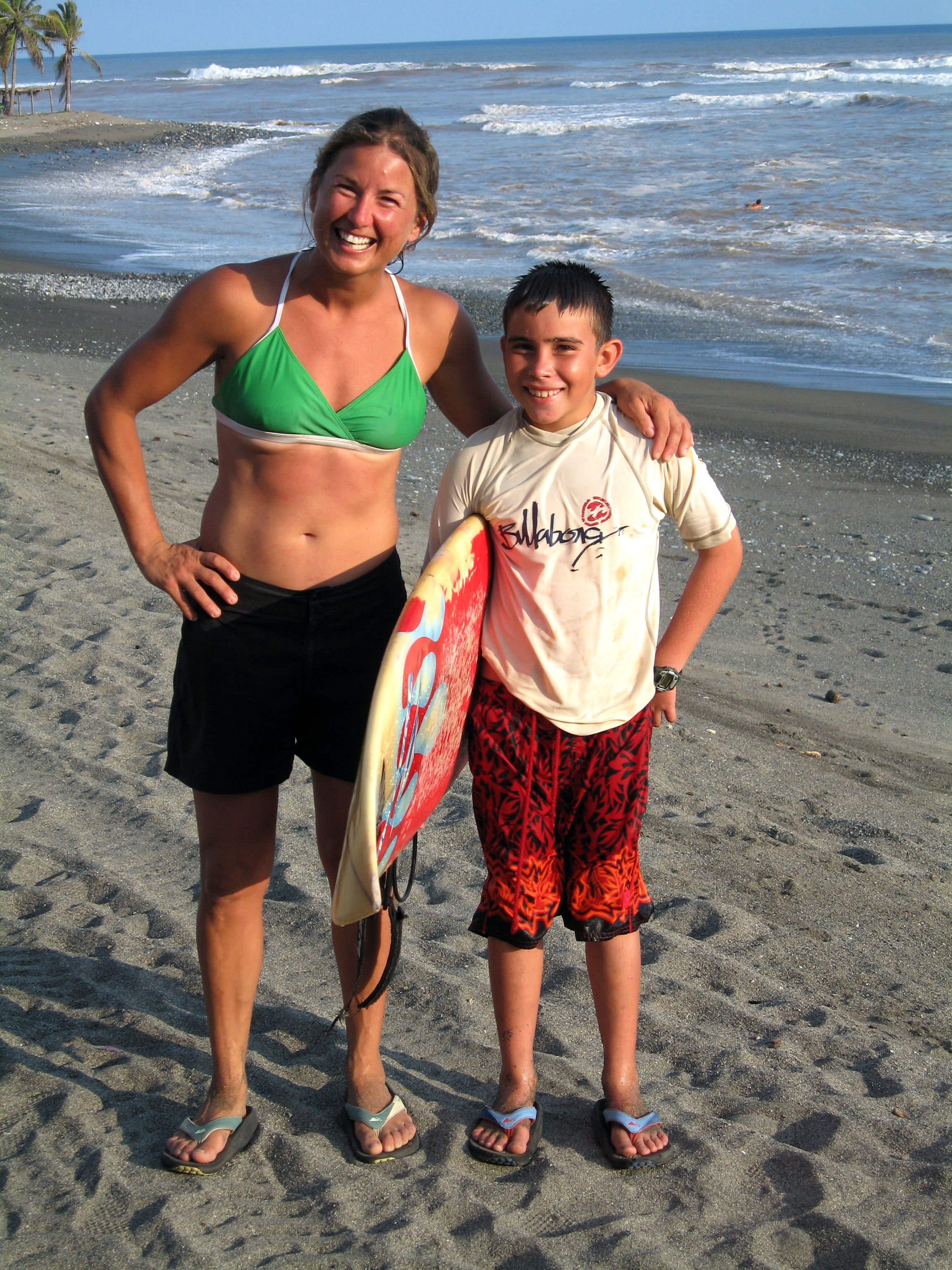 Jose, back from a big day in the backwater. Photo: JT