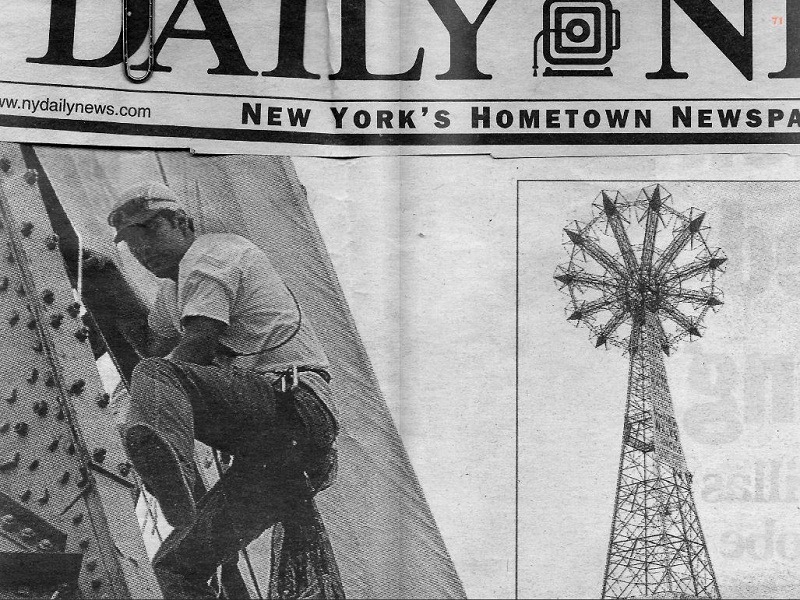 Editor’s note: Today we’re happy to share an excerpt from Living & Breathing: 20 Years of Patagonia in New York City, a commemorative book about our double-decade relationship with the Big Apple. Grab a printed copy at one of our four NYC stores or check out the digital version at the end of this post.

Their “daredevil stunt,” as local newspapers called it, was a reaction to the Parks Department’s proposal to use hardwood from the Amazon to build city benches, boardwalks and more. The organization Rainforest Relief, led by Tim Keating, argued that other materials could and should be used instead of pillaging a precious eco­system. They wanted New York and the world to know what was going on.

Heading out early on a humid August day, the group began their historic as­cent. They were equipped only with a small rack of carabiners, nylon slings, a pair of ascenders and a pulley to hoist up the impressive 125-foot banner. Passers-by and SoHo store colleagues including Elizabeth Ruiz (see p.105)—and, eventually, the police—watched on. 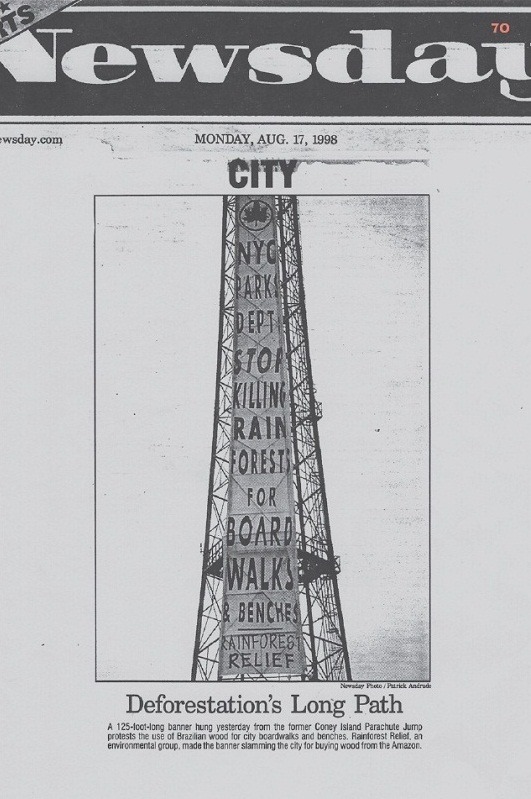 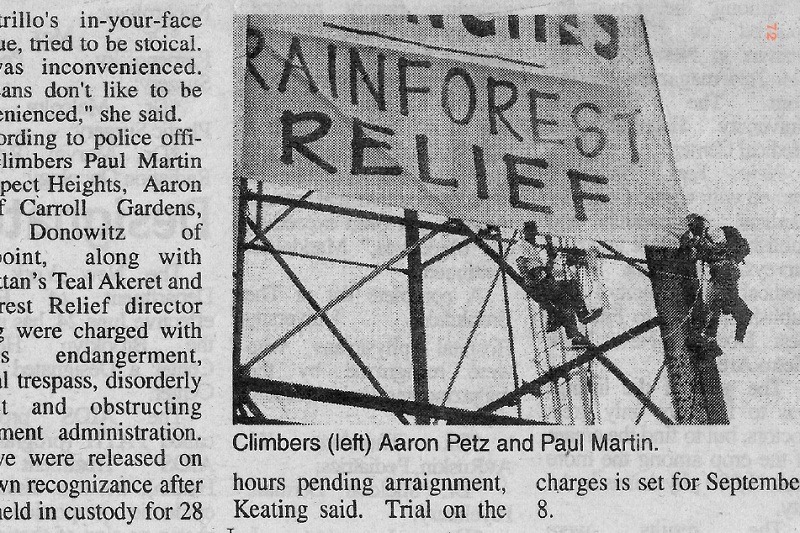 Archival newspaper clippings courtesy of Aaron Petz. The 125-foot banner was sewn together in Reno, where Patagonia had a surplus of scraps from raincoat production. It was then sent to New York, where a crew decamped on an Upper West Side roof to paint the words.

“I was very focused on the present task, like I would be leading a route on a granite wall in Yosemite,” Petz recalls over the phone from where he now lives, near Calistoga, California. “I remember looking out from our tiny platform on top of the structure as the sun rose and seeing the pink-hued skies with the outline of Manhattan in the distance. I knew there was no going back at that moment.”

For Petz, who had spent time in Brazil and was an avid climber, it was a no-brainer to take action on the issue.

“The cause was one of the significant environmental issues of the latter part of the 20th century,” he remembers. “I saw huge areas of forest that had been cleared a generation ago for farmland in the state of Paraná, where my Brazilian relatives lived and farmed. All the biodiversity that would be lost was a concern. The Amazon rain­forest is the lungs of the planet, absorbing vast amounts of the greenhouse gas CO2.”

Several hours into the disruption, the police had enough and went up after the protesters. The small crew was forced to come down and take the banner with them, but their achievements were lasting—the Parks Department eventually sought alternative materials for building.

Employees at our Reno distribution center cutting, sewing and rolling the bright yellow banner to be shipped to NYC. Photos: Ron Hunter

“The action was worth it if ultimately it persuaded the city to change paths,” Petz reflects. “It was successful because it achieved all our goals: No one was in­jured and we received a lot of press with the message we wanted to get out to the people of New York.”

Later, when their case went to court, the Rainforest Relief members got off with a slap on the wrist. It may have had to do with the fortuitous fact that the judge recognized a couple of them from the Patagonia store where she picked up her CSA box every month. Or perhaps she was sympathetic to being so moved by a cause that there was no choice but to take action.