Bang. The gun went off. I was wearing a suit. First time in a couple decades or more (for the suit, not the gun). All black, like Johnny Cash.

But I wasn’t robbing a train or singing the Folsom Prison Blues; I was doing a randonee ski race. Don’t think I’ve done a formal race in nearly 20 years – maybe since I was the first woman finisher in the Seattle Marathon. And this was a sprint race, a distance I’ve never been good at, but so what. 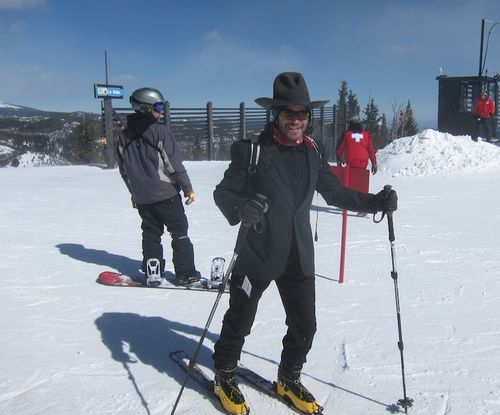 I’ve been loving ski touring, a.k.a. randonee, a.k.a. ski mountaineering – skimo for short. I love how stupid that name sounds, too. I’m not a skimo. You’re the skimo. The gliding motion is easy on my cankle, and allows me glimpses of that feeling I love more than anything: moving in the mountains.

Skimo combines mega aerobic demands – you skin uphill, sometimes adding-in a little easy climbing – with technical skill (skiing down). Pretty cool, and it fits a continuum through which I’ve long viewed climbing: from mountain running to mountaineering to technical alpine climbing to long trad routes to cragging to bouldering.Anyway, so the costume – the DOJoe Memorial Race isn’t the most serious in the world, and costumes are wholly encouraged. I dug around in my closet and found a suit jacket. Forgot I had it. Found an old tag in the pocket, too: Turns out it’s a performance-optimizing blend of 55% poly and 45% wool, also sporting an easy-layering, wind-blocking, smooth inner liner. Who knew that suits were so technical? 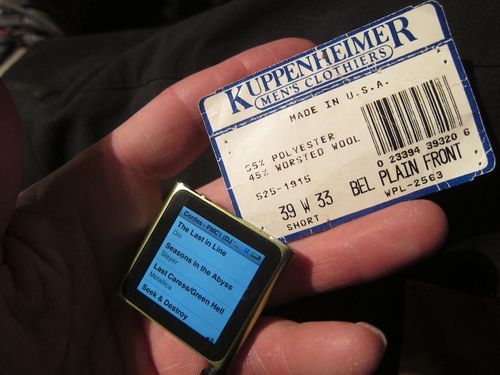 Technology truly is amazing these days. From technical suit systems to music. I’m convinced that my teensy-weensy music player improves my performance enough to be worth the weight. Warm-up with some mellow Moby tunes, staying relaxed, focusing on the flow like Happy Gilmore (“doing the bull dance, feeling the flow”), and then, as they counted down the 10 seconds to race start, I queued-up DJ Porkchop’s Training Mix (volume 1), which borrows heavily from my Metalface mix. Started with The Last in Line, and timed it to hit Ace of Spades just when I needed it.

Who’s DJ Porkchop, by the way? Oh, that’s me. I figure everyone’s a DJ these days, so I wanted to be one, too. Made myself a sweet mix.

More technology – my friends at La Sportiva loaned me some freakin’ killer skis and boots. It amazes me how light and functional this stuff is getting. Weight matters, especially when it’s weight on your feet. The boots climb ice well, too… ahhh, the possibilities.

It’s so fun being a beginner again.

Back to the race: Intensity mixed with exercise endorphins creates this wicked trip, like a mix between a heart attack and delusional thinking. Enough that, as I slobbered and snotted up the course, I thought I was in second place atop the hill climb. Thing is, I started with my head down, and so I must have missed seeing the first guy – who would smoke the course, nobody else even close – shoot out like a goddamned cannon. Didn’t even see him until the finish line (“Hey, what are you doing here?”). 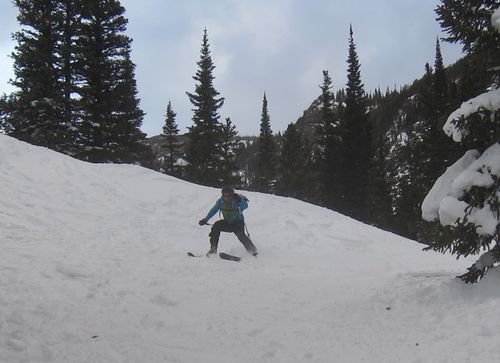 Feedback on my race performance:

• I suck at transitions. Atop the hill climb, where you take off your skins (tricky to do quickly if, like me, you don’t know what you’re doing), I was less than 10 seconds behind the second-place guy (whom I’d mistakenly thought was in first). But I bumbled the transition so badly, the volunteers practically had to pull off my skins for me. I’m such a hack. Still, I kept my thoughts positive: If the guy in front is a worse skier than me, maybe he’ll crash on the downhill and I can win! Delusional, indeed.

• I suck at skiing down. I’m disaster style on planks. Pizza, French Fries, survival. Got passed by a couple of people on the double-black-diamond downhill. Fortunately, one of them ate shit hard and lost a ski, moving me back into third. Until, out of nowhere, some Bode-freakin-Miller orange-jacketed-blur flew past me like a comet – I hadn’t even seen him on the uphill (like a rookie, I kept looking over my shoulder every 30 seconds to be sure nobody was gaining on me). I did, however, accomplish my goal for the descent: no wipeouts. Hard to crash when you’re going that slow.

• I might be decent at suffering. If it requires a head-down, no-talent sort of effort, well, I don’t want to brag but I’m kinda the man. Like the steep uphill parts, I was cranking – got to within 15 feet of the second place guy. But on the flats, where ski technique actually matters, I was like a doofus on the basketball court lumbering along doing a double dribble. He put some distance on me there.

Regarding the above bullet points, I’ve come to a startling realization: Looking back on my life, I’ve noticed a consistent inverse relationship between my performance on a given task and the skill required. Perhaps worse is that this doesn’t bother me. Uhhh, you want fries with that?

Well, at least I have room for improvement.

So I placed fourth, in just over 28 minutes. Out of 75, not too bad. And, I’m pretty certain, a clean sweep of the over-40 gimpy division. In fairness, I should note that the 75 number includes the kids’ division, men, women, tag teams (one person goes up, tags their fresh downhill partner), the snowboard division (people clomping to the top before strapping on their snowboards; I think I saw one guy on a unicycle…), and a crew wearing gorilla costumes.

Regardless of outcome, though, I’d forgotten the best thing about competition: the focus. Those times where everything else disappears. Seemed like it was a bad cankle day in the morning – I think my scar tissue traps nerves sometimes, and some days are good and some are brutal. It’s just how it goes. While warming up and taking a run or two, and skinning around, I winced hard. But once the race started, the pain simply disappeared.

These days, given my ragged body and the never-ending need to clear my head, and the love of movement in the mountains that still holds my heart, any day I can get that feeling is a good day. Granted, maybe I was just too busy staving-off lung explosion to notice anything else, but I’ll take it. Hell, I’d even do it in a gorilla suit.