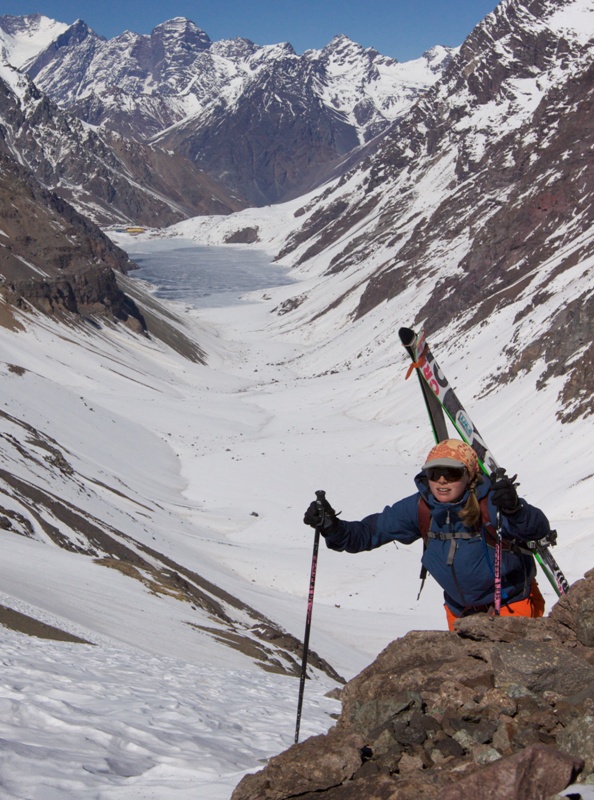 How do you get to work in morning? Are you stuffed into a sweltering New York subway car? Crammed fender-to-fender along LA’s mind-numbing 405? Either way, our morning commute to work was way more stressful than yours. I promise. We chased the sun across the Inca Lake in Portillo…

I was tagging along with Patagonia Senior Designer Glen Morden, Patagonia Ski Ambassador Robin McElroy, and a few others. Our room in Hotel Portillo was overflowing with Patagonia gear. The closet was stuffed with brightly colored technical pieces and time in between ski sessions was spent writing field reports (or playing soccer against the Chileans that work in Hotel Portillo’s ski shop). All week we were putting the soft goods through their paces, making sure that the soon-to-be-released ski jackets, pants, and layers were up to snuff. The conditions couldn’t have been better for a day of R&D. The air was bitterly cold in the mornings and it would warm up considerably in the afternoon, simulating mid-winter and spring conditions for the gear.

[Robin M close to the couloir; the conditions not looking as sweet as we thought. Photo: Frank Shine] 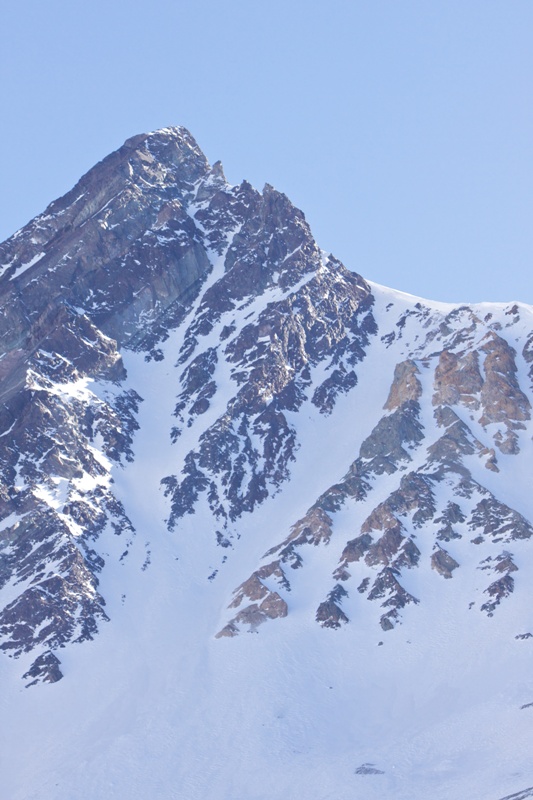 Like children, our heads were on a swivel throughout the week, soaking in the environment. Jagged and ominous, Aconcagua towers to 22,841 feet and every spine, cliff, exposed rock feature, and lake lie in its shadow. We were constantly pointing to puckering lines that Shane McKonkey and Arne Backstrom flashed and asking, “What about that?” Portillo veterans answered our eager questions in the same vein: “Arne made it look easy.” Everything seemingly goes; if there’s snow, that is.

Things were dry this year below the equator, storms that are normally measured in meters left mere traces of snow on the chossy, shale pitches. Fortunately, high morale and levity were two things that our crew—from Ventura, Aspen, Jackson Hole, and Squaw Valley—had in abundance. Neon headbands and 80s-style blade sunglasses (which we all lobbied for Patagonia to start designing) kept things light on long boot-packs. Random questions created laughter during the crux of a climb and self-deprecating humor eased the sting.

On the morning we were to cross La Laguna del Inca, alarms sounded while stars and a crescent moon illuminated the sky. The goal: a rarely skied couloir across the lake at the summit of one of the Tres Hermanos (three beautiful and ominous peaks that lie in the foreground of Aconcagua).

One by one we straight-lined down a low-angle pitch, trying to carry as much speed as possible onto the ice to coast as far as possible. Like ducklings we followed Aspen-based photographer Frank Shine, watching the early morning sun rising over the Andes and looking back to see the iconic yellow façade of the Hotel Portillo shrink as we skated across the lake. 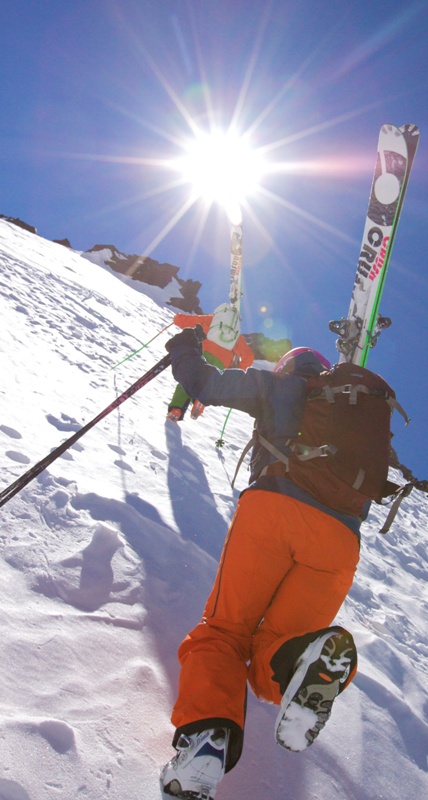 began to tumble from the cornice atop the couloir due to the changes in temperatures.

Around noon we sat, under the final pitch towards the summit. The decision was made to call it a day. Conditions, preparations, and excuses aside, it wasn’t meant to be on that day.

We sat, feet dangling above the valley and lake below, eating cheese sandwiches when we heard the unmistakable noise of a helicopter’s blades. The loud bird was flying marquee skiers and Hollywood-camera equipment to pristine zones for filming and soared overhead, banking a turn like we had seen a massive Andean Condor do earlier on-wing, and disappearing around a bend. We joked about how pampered the athletes were, and all instinctively knew that the snow wherever the helicopter was headed would be better than the bullet-proof stuff that awaited us in our descent.

In the end, though, skiing is skiing. And as soon as we stepped into our bindings each one of us was reminded of the real goal for the excursion: fun. Fast, Super-G “Arne Backstrom” turns, a handful of memorable photographs with Tres Hermanos in the background, small cliff-bands, and an open field at the run-out made up our descent. Each one of us coasted into the valley floor with a big smile.

The skate back across the lake was relatively uneventful. The crack had grown, we skirted around it, and bee-lined for the opposite bank without looking back to see if the ice was cooperating.

In the end, we didn’t meet the ski objective, we stared into a gaping crack in what was supposed to be a frozen lake, the snow conditions were substandard, and the helicopter 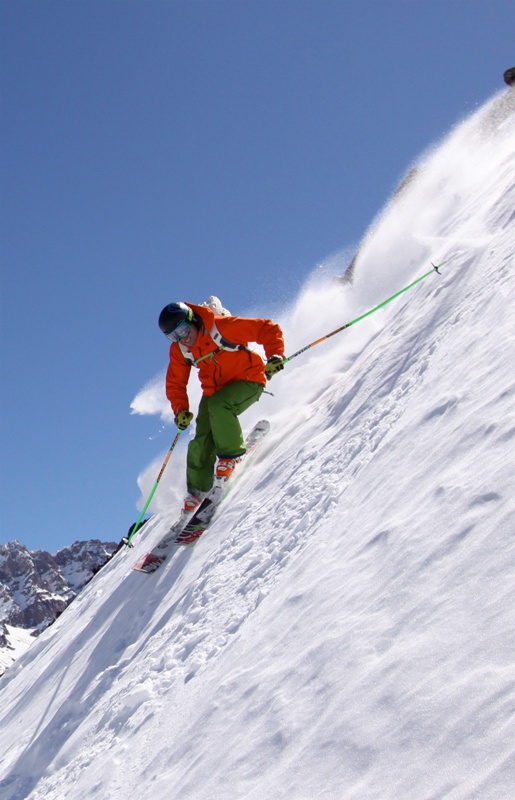 overhead was a reminder that somewhere people were actually scoring the snow that we set off to find. Some might define the excursion as a skunk, but we all chalked it up as a score. Watching the sunrise over Aconcagua, witnessing a massive Andean Condor carve a perfect turn in the air, and skiing with a close group of friends is not a bad day of work. And, since it was a workday we all sat down over beer and empanadas to discuss the upcoming Patagonia ski apparel. The consensus: “This stuff is dialed in!”

Greg Fitzsimmons is an Aspen-based freelance writer. He skis everyday, but makes rent by contributing to magazines and websites like The Ski Journal, Powder, GQ, ESPN, and www.skiresorts.com.