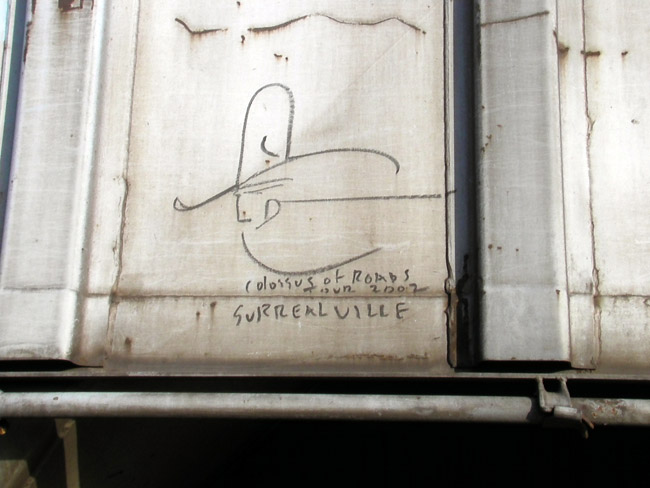 It wouldn't have been so bad if the dog didn't try to chew the photographer's face off. But that was just the start of it, and besides, how could he have known? All he knew is that there he was, huddled alone in the middle of a Nowhere most folks can't even imagine; a nowhere without many reminders of somewhere. A nowhere chock-full of things like space, shadows, light, and silence, and – at this particular moment – one hell of a springtime snowstorm.

What this piece of nowhere had was a connection to somewhere and someone in the form of a seldom-used road. It was on this road that the Someone he knew was due to arrive with something he needed badly: food and water. With the full weight of the crushing storm bearing down on him, the snow and ice being driven like a fistful of pulverized glass by the storm's hurricane-force winds, he probably wasn't thinking about someone's dog, or the photographer's face – he was cold as hell and too hungry to think. An hour of expectation in a position of desperation is tough to handle – with one Warmth card left in his deck, Adam stood up, threw on his pack, and played it. He set out at a stiff stride toward the nearest piece of pavement – a solid day's walk away – determined to win back some warmth and get – god willing – close enough to civilization to pick up a signal. One bar was all he needed on his phone to ask, "Where are you?"

If he'd have been able to make the call, he would have heard about the dog, about the mad scramble to hold the photographer's face together, the rush to the hospital, and maybe the location of his support vehicle. But this day on the SWIP route already felt different. The suspicion was confirmed when, against the odds, a vehicle materialized out of the storm. It had already had the makings of a day Adam would be telling stories about in years to come.

And this was before he found himself strapped to a wheelchair, hurtling down a dirt road in a van full of drunken Indians.

Following the route of a the proposed Southwest Intertie Project, aka. the SWIP, through 500 miles of barren, often trackless land can be hard enough. Staying in touch with Nevada Wilderness Project's support staff to trade stories, update maps, swap coordinates, and resupply with water and food certainly eases some challenges, but in doing so, creates opportunities for new ones, like those above. The kind that can make a body feel like a resident of Surrealville.

All the more strange, then, that only days later, he would find himself wandering through a landscape that could have been cut straight from a post-apocalyptic film. Abandoned in the desert, with no clear connection to anything, sat a long line of ore cars, like a rough protrusion from a perforated line otherwise perfectly torn. As he walked the length of the line, ravens, hundreds of them, circled about above Adam's head, erupting from and returning to nests, squawking out conversation to each other. It was a good time to reflect the purpose of his walk.

The SWIP trip was conceived in the hope that by traversing a piece of empty land, Adam and the Nevada Wilderness Project might be able to return from that ancient wilderness with some stories. Anyone who follows conservation efforts can pretty well guess the arc of the SWIP narrative: concerned group goes to see what's there before it's developed, comes back with great pictures and talks in hushed voices of what will be lost. Those who have done the work know the feeling of futility that comes with trying to explain to others what they're about to lose. How do you make sense something like "habitat loss" to creatures who live surrounded concrete able to bring the world's resources to their door? How do you send a message out from the middle of nowhere to world that should be listening? Standing in the middle of nothing, how do you speak loud enough for others to hear?

Alone in that stark wilderness of light and sage, Adam bedded down "like a rabbit in a hole in the mesquite," he says, in this short video. He woke up to ancient light, the constant ravens, and to a surreal image – a thread that reached back to another story and another lone traveler.

Just like that, two stories thread together across time and space, in a confluence of lives that bends the mind to imagine. The fabled Colussus of Roads there above the hiker's rough camp, connecting his solitary spirit to another life, "speaking his art to nothing," as Adam states.    And being heard.

For more information about the Colussus of Roads, check out this great short film by Bill Daniel, who tries to answer the question Who is Bozo Texino?

And as for what happened to Adam after his ride with the self-described "band of crazy, drunken Indians" . . .  we'll have to find out the rest once he gets back. Get the latest on his progress and other SWIP Trip stories on the Nevada Wilderness Project's blog.