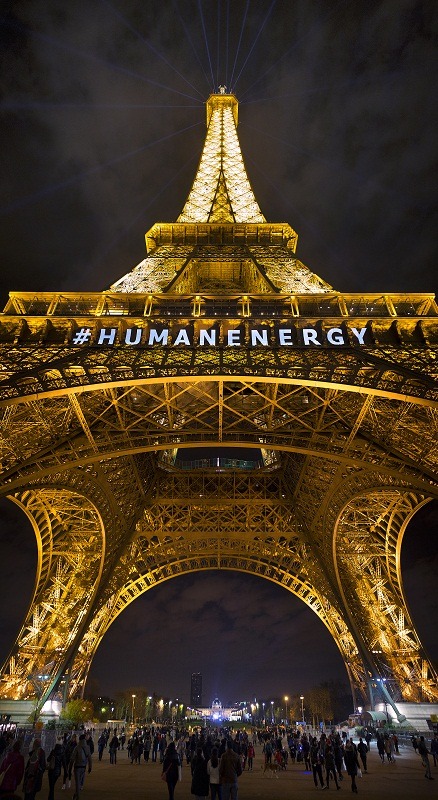 For the past month, the entire world has been focused on Paris. First, an act of pure and peace shattering barbarism brought the City of Lights directly into focus in the hearts and minds of all of us just two weeks before Thanksgiving. And then, with the hurt still raw and hemorrhaging in worldwide waves of fear, arguably the biggest environmental gathering of this modern age descended upon the scene. 2015 is about to conclude as the warmest year on record here on Planet Earth, just a year after 2014 earned the same distinction. The planet, like it or not, is changing, and 194 countries from around the world have come together to try and do something about it.

Above: Public assembly has been shut down during the conference due to security concerns, but the arts community has found creative ways provide a voice for the many. #HumanEnergy display by artist and researcher Yann Toma. Photo: Kodiak Greenwood

Officially, the event is known as the United Nationsʼ Conference on Climate Change, or COP21 for those of you fond of acronyms. It began last Monday, November 30th, at the Le Bourget convention center just north of Paris, a location but two short metro stops from Stade de France where terrorists attempted to detonate a bomb at a packed soccer match. The goal is to forge a legally binding international treaty that works to aggressively cut global CO2 emissions and, in turn, try and keep global temperature rise at or below two degrees Celsius by 2100. To put it simply, these talks are trying to legislate the saving of the natural world as we have always known it. It is a daunting task.

The efforts began with a never-before-seen gathering of world leaders at Le Bourget, more than 150-plus Presidents and Heads of State from nations big and small showed up to pledge allegiance to the process and provide one heck of a powerful show of solidarity at the commencement of the two-week conference. As COP21 Executive Secretary Christiana Figueres said her opening remarks to the leaders on Monday, “Never before has a responsibility so great been in the hands of so few. The world is looking to you. The world is counting on you.”

Traveling with photographer Kodiak Greenwood, I have been here since the day before the action began. A trip that was not without itʼs fretful hand wringing and angst. As a freshly minted father and realistic citizen of the world, I would be lying if I said I wasnʼt apprehensive about making the journey to Paris after the heartbreak and terror of November 13th. But journalism is what we do and this is a moment in history that I could not and would not miss, especially with my baby girl making me think about the future in a new and more poignant light. I am a wild and wide-eyed lover of the great outdoors and these meetings may be the last best chance we have to make sure my little Sawyer can grow up to know the sublime embrace of a powder day deep in the Sierras or the sloppy, soul-stirring kiss of being caught in a seasonal rain storm along the coast of her native Southern California. Sometimes, simply bearing witness is enough to help you sleep at night. What exactly we will see, however, by the time this bureaucratic rodeo ride ends, is still very much up in the air. 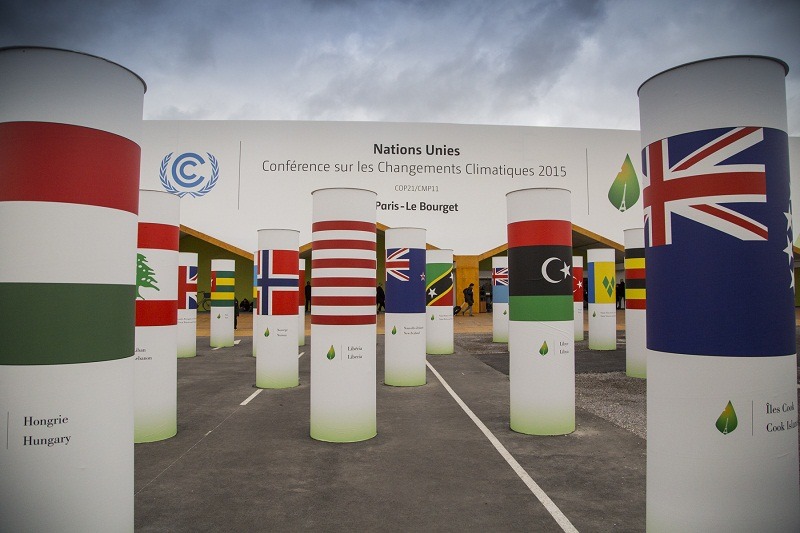 The view upon arrival at the climate conference just north of Paris. Photo: Kodiak Greenwood 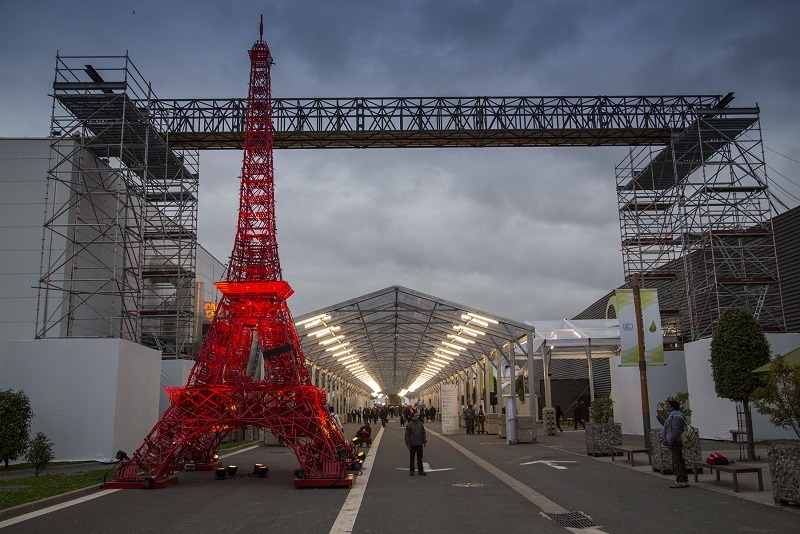 Inside of the Le Bourget Center, the place where the conference and all the negotiations go down. Photo: Kodiak Greenwood

So what is the COP21? Well, it is the 21st annual meeting of the Conference of the Parties, an assembly of United Nationsʼ members specifically in the name of combating climate change. After the expiration of the Kyoto Protocol (the last great, big multi-national environmental accord), the goal has been to replace it with an even more robust and ambitious incarnation. That effort has had regular victories and setbacks for the past six years as countries bicker back and forth about what such an agreement might actually look like and what it would mean for massive world powers like the United States and China, to developing nations like India, to small countries on the front lines of climate change like the Marshall Islands, the Maldives, Bangladesh, and virtually everyone living within the Arctic Circle. It is a cartoonishly laborious process trying to find compromise with such divergent interests wrestling over the terms and conditions of the most important Earth-minded document of our lifetime but that is exactly what the COP aims to do.

And so, here in Paris, the goal is to take a draft version of what is being billed as the “Paris Agreement” and have all the countries and their negotiating teams haggle over it until it is reduced to a streamlined and relatively simple document that can be ratified unanimously by the conferenceʼs scheduled end on December 11th. Among other things, the document would identify clear carbon-cutting goals for every country, define the mechanisms by which these efforts would be monitored, and identify a funding mechanism for helping lesser fortunate countries meet the demands of a world in the throes of ever worsening climate chaos.

As of writing this, on the Sunday of the middle weekend of the conference, there is—amazingly—real progress being made towards that end. The draft document (which must, at this phase, represent all the wants and wishes of various nations) has managed to shrink over the past five days, an easily measurable metric of progress. More to the point, the sections of the document that memorialize specific areas of hard fought head butting between countries and loosely formed coalitions of countries have also been trending in the right direction. To be certain, there is still much work to be done but, if you are glass half full type of guy like me, there has also been a remarkable amount of work already accomplished. Onward it goes…

Never before in the history of the modern world have so many leaders been under one roof. Or, as conference Executive Secretary Christiana Figueres put it in her opening remarks to the leaders, “Never before has a responsibility so great been in the hands of so few. The world is looking to you. The world is counting on you.” Photo: Kodiak Greenwood 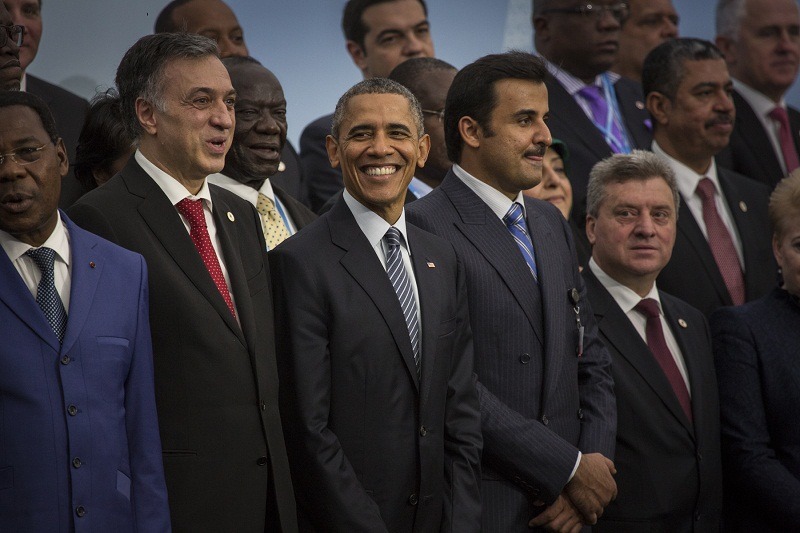 President Obama enjoying the “family portrait.” Only 20 journalists were allowed backstage with the leaders and we were among them. Photo: Kodiak Greenwood

The Uplifting Force of Bill McKibben and his 350.org Brigade

What is happening here in Paris is by no means limited to the bureaucrats in blue power suits. Far from it, actually. This is the Burning Man of the environmental movement. Literally thousands of NGOs and scientists and activists and economic speculators and renewable energy folks are here as well, either bird-dogging the process formally as “Official Observers,” lobbying from a distance, or simply adding their voice to one heck of an Earth-focused networking chorus going on at events all over the city.

It is often, from these aforementioned ranks, that many of the most inspiring and real world-based moments emerge. This week, 350.org provided just such an occasion as they announced the latest from their ongoing divestment efforts, a movement aimed at getting both public and private businesses and organizations to do away with their respective long-term investments in the oil, coal and gas industries. To date, working in conjunction with their partner group Divest/Invest, the largely student-led cause has enlisted over 500 business outfits, representing over $3.4 trillion in investment assets, to walk away either completely or partially from having the fossil fuel industry in their portfolios.

People may not always understand or believe the science or moral side of the case against oil and coal but the economics of this news is something even the most devout climate denier has to pay attention to. It isnʼt just the obviously “green” oriented opting in to to the divestment movement. The steadily growing ranks (350.org and company only had about $50 million from 181 businesses/organizations pledged a mere 14 months ago) include the state of Californiaʼs pension fund, the cities of Oslo and Melbourne, the London School of Economics, and Europeʼs largest insurance company, Allianz. “It is clear that the climate movement is now robust and strong and capable of continuing no matter the forces against us,” said 350.orgʼs founder Bill McKibben. “We are in the process of shutting [the fossil fuel industry] down through divestment and constant hammering of all kinds on numerous fronts. It is happening.” 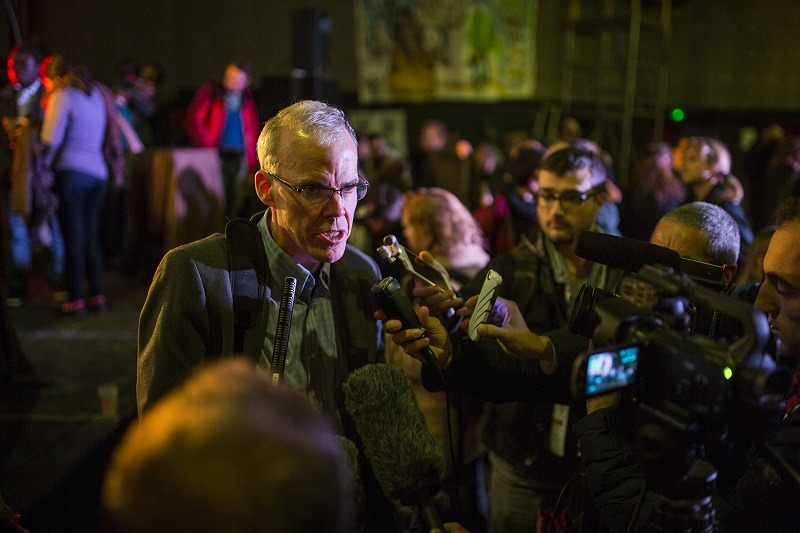 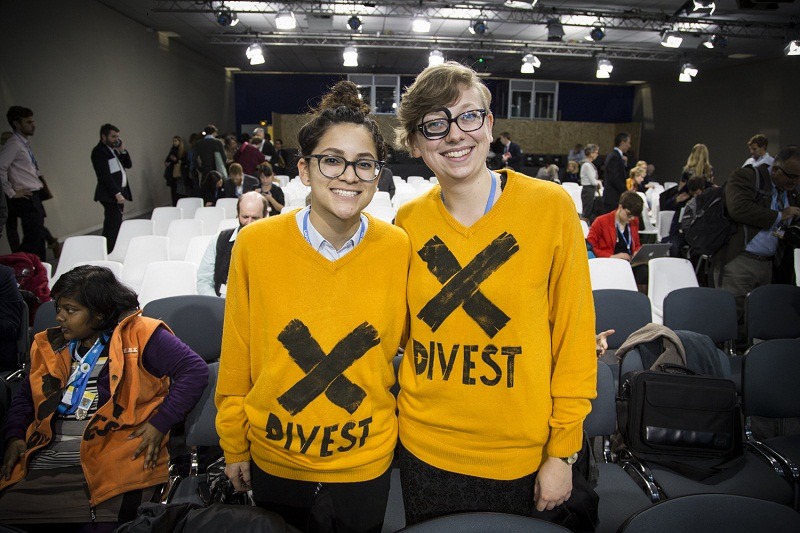 The divest movement is largely a student-led cause. Photo: Kodiak Greenwood

Activism in the Wake of Terror

In the wake of the terror attacks last month, the French government moved to shut down any and all public assembly during the COP21. It was too risky they said and most from within the climate justice movement found it hard to argue. That being said, the two-week conference was going to be occasion for dozens of planned large-scale actions, including one being billed as “the biggest environmental march ever” on the day after the talks are scheduled to conclude. The executive order threatened to silence the voice the people, a crucial part of the balance during international talks like these.

Luckily, turning a creative eye to the situation, the arts community has come up with some tremendous late-hour solutions to the predicament and continued to provide a voice for the feelings of so many. After a relatively small action on the day before the conference began led to some tear gassing and a couple hundred arrests, it has been a protest via the arts, by and large, ever since. From eye-popping projection installations on the fronts of iconic buildings like the Louvre and the Assemblée nationale to massive chunks of ice from the waters of Greenland being placed in the pattern of a clock in front of the Panthéon to simple and powerful street poster campaigns these efforts have been both sobering and inspirational, all while staying within the boundaries of what the law currently allows. 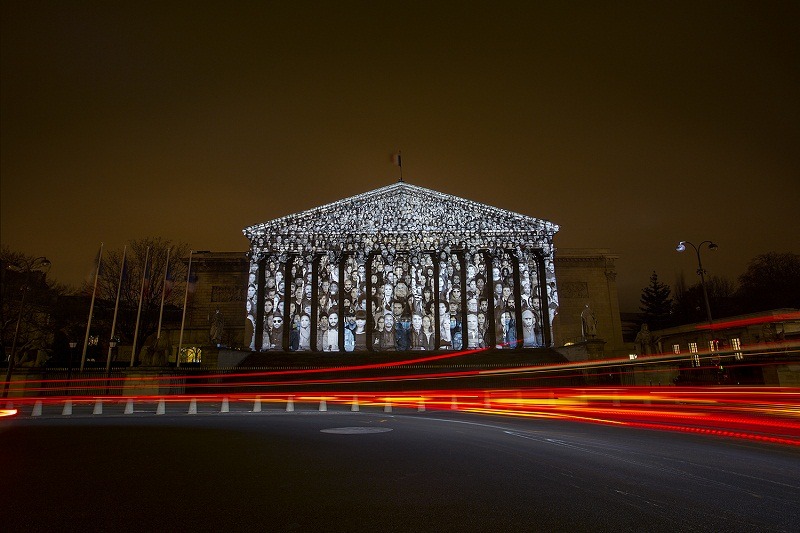 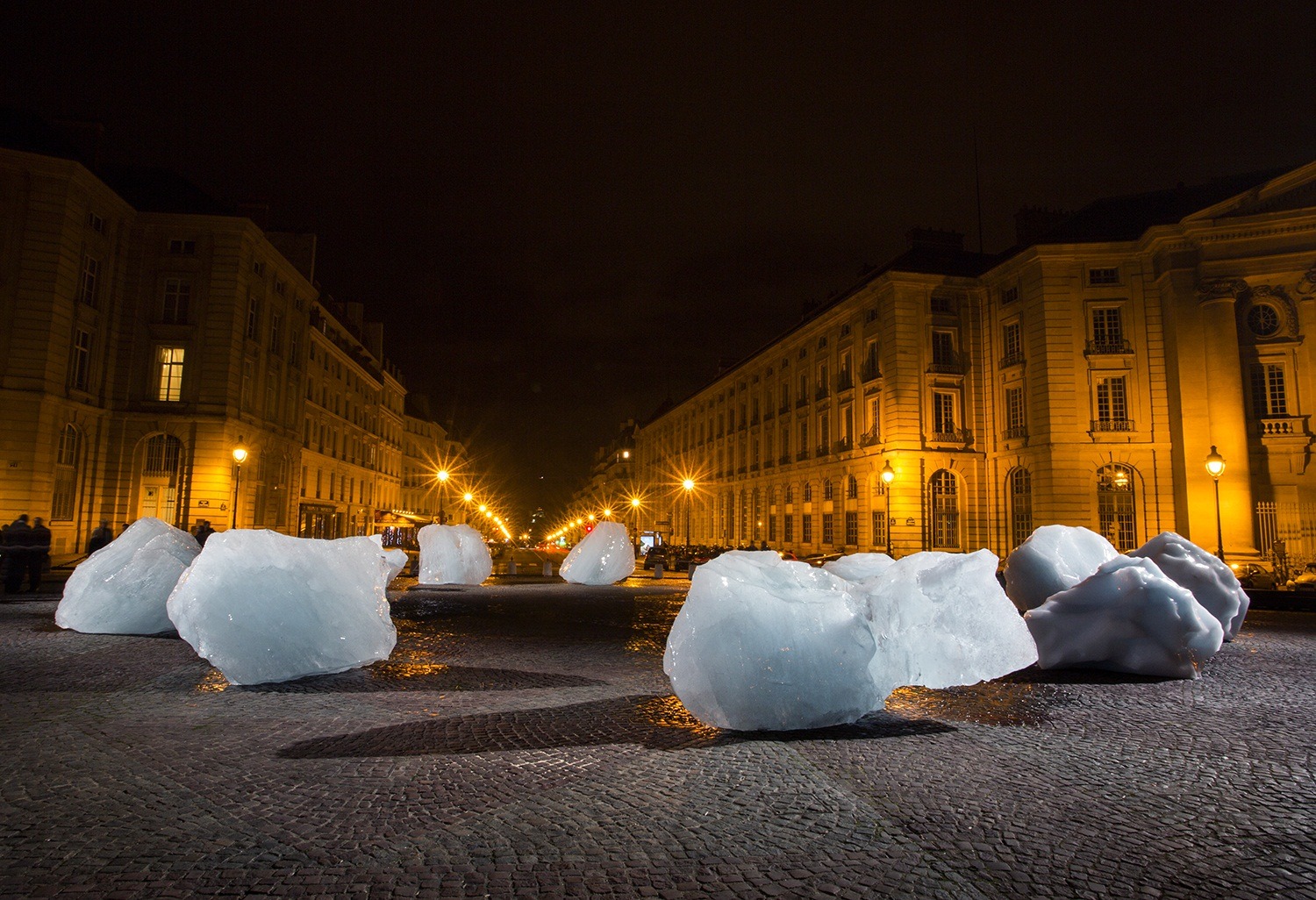 “Ice Watch Paris” is a collaboration between Danish artist, Olafur Eliasson, and Danish geologist, Minik Rosing. Twelve free-floating icebergs were harvested by divers in the waters around Greenland’s Nuuk Fjord and arranged in a clock pattern in front of the Panthéon building. Their message is simple: Time is running out. Photo: Kodiak Greenwood 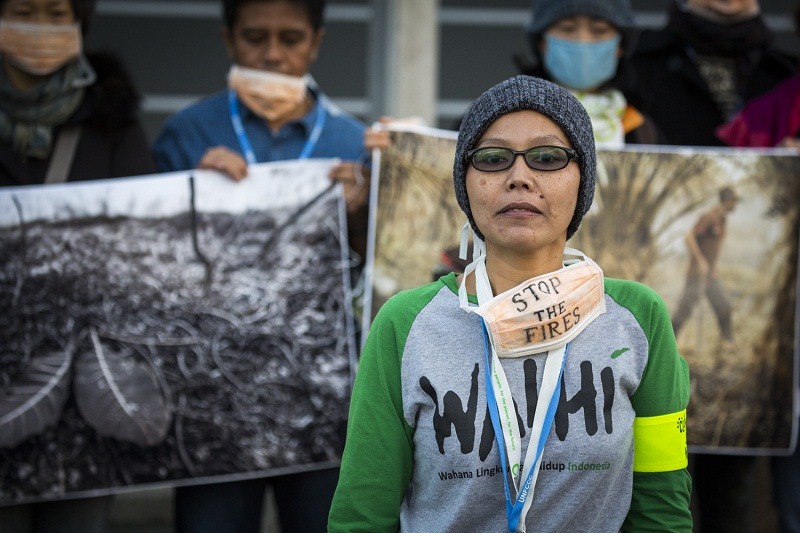 Indonesia has replaced Brazil as the world’s biggest deforester for agriculture. During recent fires—purposefully set to clear the land—Indonesia was emitting more greenhouse gasses than the U.S. Photo: Kodiak Greenwood 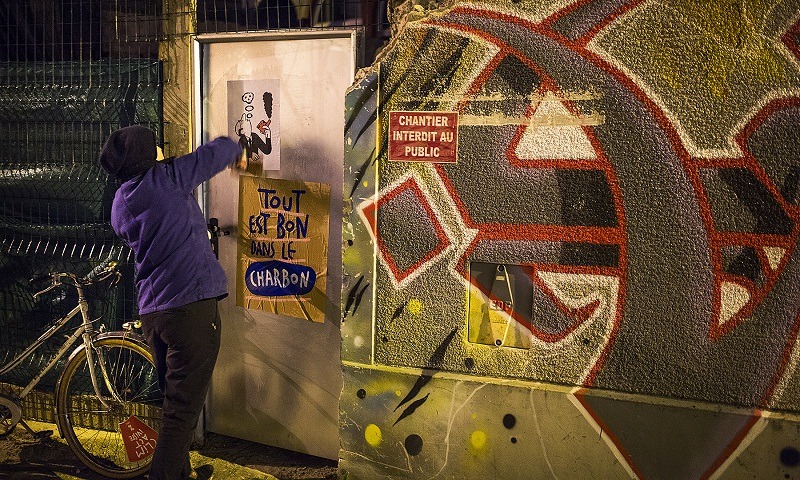 From large-scale projections to simple street art, activists will always find a way to get their message across. Photo: Kodiak Greenwood

Our thanks go out to Ethan and Kodiak for sharing their experiences with us. Stay tuned for part two, coming soon. For more of The Paris Project, please visit The Santa Barbara Independent.

Update: Continue reading with part 2 of The Paris Project. 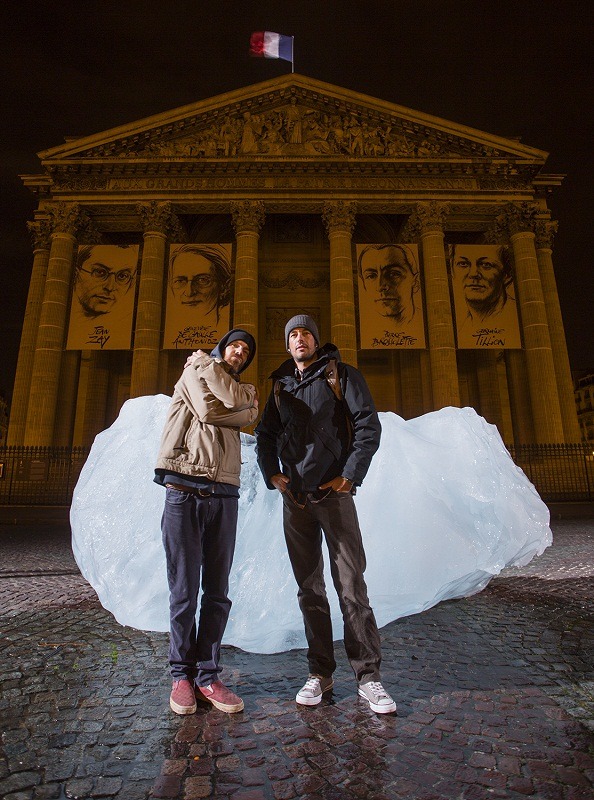 Ethan Stewart is Editor-at-Large for the Santa Barbara Independent and an occasional contributor to The Cleanest Line. Born and raised on Cape Cod, he’s called Santa Barbara home off and on since the great El Niño winter of 1998.