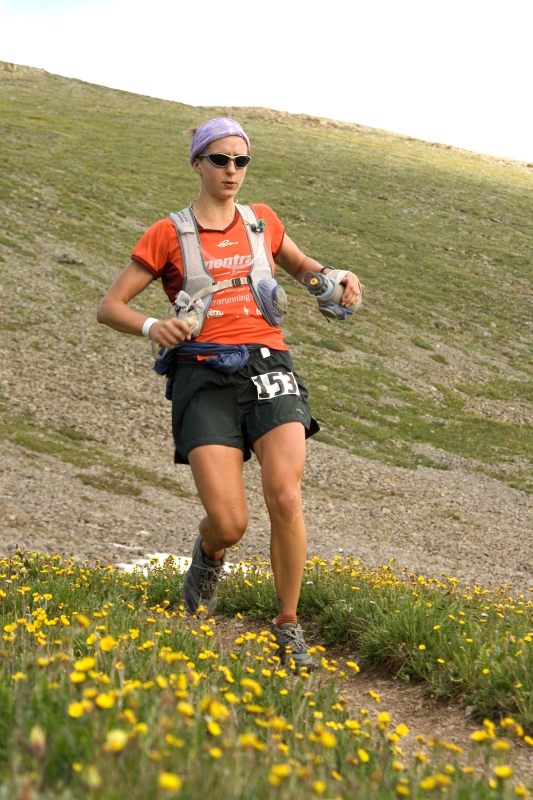 Patagonia wordsmith and former ultrarunner, Craig Holloway recently interviewed Patagonia ambassador, Krissy Moehl about her win at this year’s Hardrock 100 in Silverton, Colorado. Krissy is considered one of the top female ultramarathon runners in the country.

Craig: Congratulations on setting the women’s course record (29:24) at the 2007 Hardrock 100. You were the first woman and placed third overall. How is your recovery going?

Krissy: Recovery is such an important and overlooked part of endurance events. In the first week following Hardrock I felt great, probably soaring high from the endorphins and excitement of a surprise success. I was definitely sore in the joints (knees and ankles) and could tell I’d done something. My muscles fared surprisingly well through all of the elevation changes. I ate a ton during the event and think that helped me avoid muscle cramping and tearing/breakdown. In the second post recovery week I started to feel depleted and exhausted. Traveling home to Seattle and then to the East Coast for work I didn’t get much sleep and was away from any kind of normal routine. Slowly, I’m coming around.

Craig: What makes the Hardrock 100 such a special event within the ultrarunning community?

Krissy: I imagine each “Hardrocker” provides a different response to this question. For me, Hardrock is not only about the race but about the required preparation. The race brings together top-notch runners who come from different walks of life and bonds them in months spent training as well as in the actual event. A large group of the participants showed up weeks in advance (I was there two weeks early) to train and adjust to the altitude. The course offers 33,000 feet of gain and equal loss, nine trips over 13,000 feet and one over 14,000 feet, and is dubbed the most difficult 100-mile trail run. A couple of other reasons: There’s not much else to do in Silverton but run, eat and sleep. And the wait-list to get in is longer than the list of registered runners so people wait years to be able to run Hardrock.

Craig: What was your training like leading up to the Hardrock 100?

Krissy: This year was a true test of my dedication to running. In January I ran the HURT 100-mile trail race in Hawaii, placed second overall, first woman, and set a new women’s record. After that race I experienced my week of “feeling ok” but afterward went through a bit of depression and lack of motivation. It was daunting to think of training for Hardrock with my new job at Nathan and traveling so much. I got motivated to run but was in places that meant a lot of road running and even treadmill training. Training at Coyote 4 Play in Ventura, CA, running the Leona Divide 50 miler, Palmdale, CA, and the Jemez Springs 50 miler Los Alamos, NM, were events I did leading up to Hardrock.  I also got out in the Seattle area for a great 40-mile training run with Scott Jurek (men’s Hardrock winner) to boost endurance.

Craig: What did you carry in your running kit, running 100 miles through the San Juan Mountains?

I alternated between the Nathan HPL #028 “Krissy Race Vest” with two Thermal Draws, handheld bottles and the Nathan Women’s Intensity Bladder Pack for my hydration and nutrition storage.

At night when things cooled down, I added the old Dragonfly (now the Houdini) and an R.5 Beanie. I borrowed a pair of the Houdini Pants from one of my pacers just in case.  They were so light I didn’t even realize they were in my pack. It never got cold enough to stop and put them on.

For lights I used the Petzl Tikka Plus on my head (on the whole time) and held the Petzl Myo XP in hand for more light on the technical downhill sections.

Craig: Is there a ‘must have’ Patagonia product that you always bring with you to ultrarunning events?

Krissy: Without a doubt the Houdini Full-Zip Jacket is a key piece. I can count numerous times that thing has saved my life or at the minimum made an ugly situation bearable.  At Hardrock, rather than having to change into a long-sleeved layer I took the Houdini and put it on when we reached higher/colder altitudes.

Craig:  A runner’s crew is similar to a NASCAR racing pit crew  — everything happens so quickly when a runner comes into the aid station. Tell us about your crew and what they mean to you.

Krissy: I’ve had that NASCAR pit crew experience and requested to my crew that we not have that type of experience this go around. Most of them traveled quite a distance to be a part of this event and it’s important to check in with them and spend a little time communicating what the day is feeling like. I had a large crew that came in from all over to support me: Ma and Pa, Ben Moon, Darcy Africa, Steph Ehret, Karen Scott, Stan Lambros and their daughter Madison, and Kyle Skaggs. They imparted so much positive energy throughout the day, night and following morning. There was no way I could not reach the finish line without their support.

Craig: Along with the crew there is a pacer who runs with the runner through the night and in the later miles of the event. How many pacers did you have and what sections of the course did they run with you?

Krissy: I had three pacers and each one provided a new spin and boost of energy. Ben started at Grouse Gulch, took me over Engineer Pass, down the longest descent of the course into Ouray. Never having paced before he was great with encouraging words and quickly picked up on what I was able to walk and when he needed to push me to run a bit.  Darcy met me in Ouray and took the longest section, over Virginius Pass, down into Telluride, over Oscar’s Pass and down into Chapman. We had a great time running and walking up the road out of Ouray and really made up a lot of time in that section. We left Telluride laughing but as the night and early morning wore on I slowed down, and got cold.  She did all the right things to keep me moving forward – only wish we’d had a bit more caffeine! Kyle brought me home and was super motivating, helpful and pushed me to achieve a great time.

Craig: Veteran, Hardrock runners jokingly refer to the Hardrock 100 as the Hardwalk. Is this a pretty accurate statement?

Krissy: I definitely agree. If I had to guess I would say I walked more than 60% of the course; it is hard! The race keeps coming at you with multiple passes — in the last 18 miles you go above 13,000 feet twice. There is not a lot of time to rest or recover.

Krissy: I have only run the entire course in the counter-clockwise direction. I have paced twice in the opposite direction. I don’t know which is tougher, but I believe clockwise is faster because you get most of the tough climbs out of the way early in the race.

Craig:  How was the weather on top of Handies Peak (elevation 14,048 feet) this year?

Krissy: I feel like the runners really lucked out this year. Dropping down into Sherman (the aid station before going over Handies Peak) we got rained on. Coming down the valley you have a great view of Handies and the peak was totally socked in, and it made me a little nervous. As we ran up the road from Sherman we saw pea-sized hail piles on the side of the road. Fortunately, the weather started to break and by the time I made it to the base of the Handies Peak trailhead the peak was clear. I debated taking my Spraymaster Jacket with me over the peak but decided the Houdini would be sufficient.

Craig: What view along the course really stuck out for you?

Krissy: There are so many spectacular vistas along the course. It was probably early on coming into the first aid station, Cunningham at mile nine. We just finished this magnificent climb traversing a scree slope, crossing a saddle and then steeply switch-backing off the top. Rounding one of the corners I glanced downward and felt like I was looking straight down on hundreds of cars. That perspective took my breath away. Coming into that aid station was a lot of fun with all of the volunteers and the energy of my entire crew.

Craig: Why do runners have to kiss a giant boulder at the finish line?

Krissy: Put simply, your kiss stops the clock. Your time is done once you plant that wet one. I think the rock is symbolic of the miners that created and used the trails.

Craig:  Do you have any events planned on your fall race calendar?

Krissy: Not just yet. After the slump I went through after HURT I didn’t want to have the pressure of another race after Hardrock. Right now I am focused on recovering right, getting on my bike and whatever else comes my way. I’m looking forward to pacing a friend, Jenny Uehisa at her first 100-mile run, the Cascade Crest at the end of August. I hope to help Kyle Skaggs at his first 100, the Wasatch Front Endurance Run. I’ve thought about running a 100 miler in San Diego for my 30th birthday in October. We’ll see.

Craig: One last question: If you weren’t running ultras what do you think you might be doing right now?

Krissy: Tough question. Running has been such a big part of my life for so long –- work, spare time and a lot of my friends have revolved around the sport. I like to think that I‘ll always run on the trails to some degree, whether ultraracing or running recreationally. I feel it’s important to keep a healthy life balance. I do focus on running and spend a majority of time and energy on the trails but in the down times it is fun to explore other things. I enjoy reading, movies, biking, climbing, writing, crafting, cooking and entertaining family, and friends.