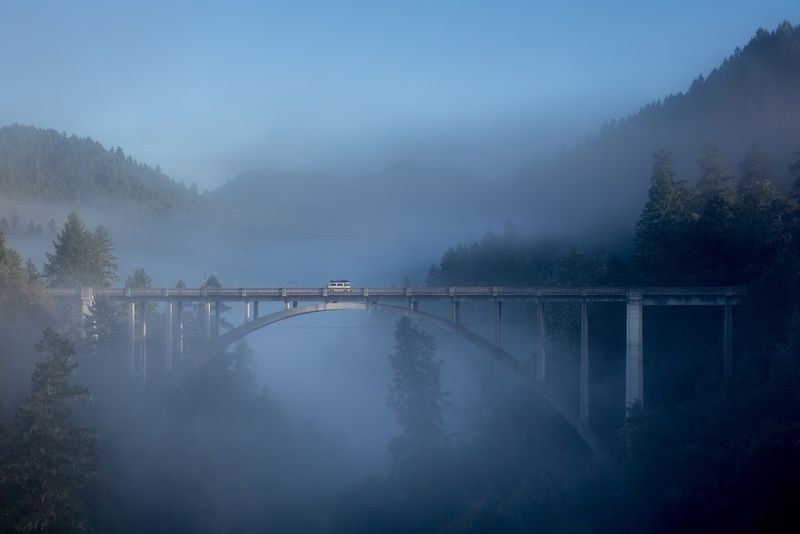 This was my fourth time up to Vancouver Island to surf and camp along its coastline. I’ve sort of made a pact with myself to visit this place at least once a year after first falling in love with it three years ago. The beauty and power of Canada captures you, and it keeps me coming back. Each time I’ve been up there, I say, “It’s so close! Next time, I’m going to drive up!”

I have a maroon 1988 VW Vanagon that would likely meet its death if I attempted the trip aboard it. My vagabond buddy Foster Huntington has been living in his van for more than 16 months. His is the mature, accomplished, big-brother version of my van – a 1987 4WD Vanagon with an Audi motor.

I had a window of 12 days to make my trip to BC happen before I had to be back. After that, I couldn’t make it work until spring and by then conditions for surf are even less favorable. I asked Foster if he was around to take a road trip up to Vancouver Island and before I could finish he insisted we take his van. “I’ll get a tune-up tomorrow!” he said.

There was no itinerary. No plans to be anywhere at any specific time. No idea of where to spend nights or which roads to take. The plan was to load the van with as much gear as comfortably possible and head north, flyfishing, surfing, and all things fun were the only goals. 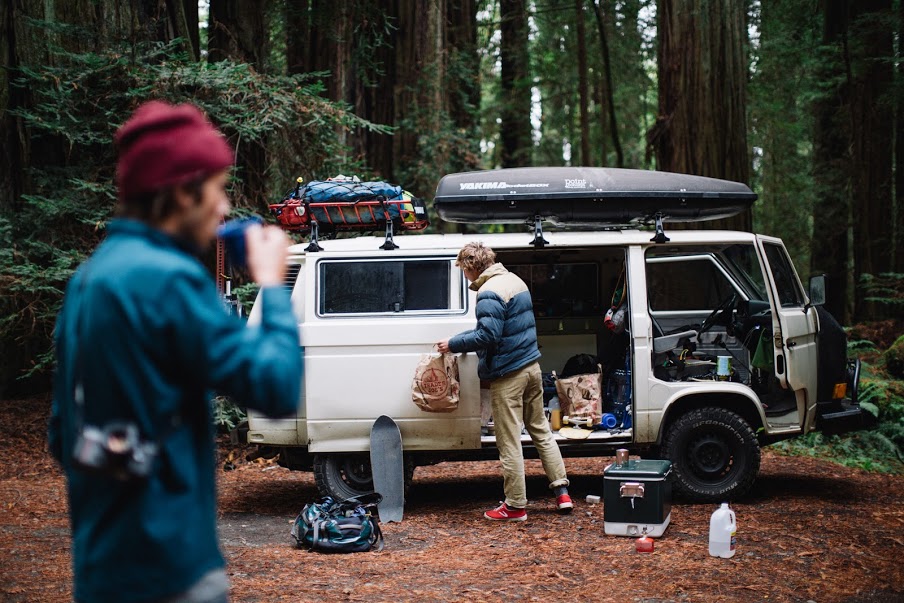 Day two, a full day of driving past San Francisco. We stopped in a redwood grove to make another cup of coffee and a couple avocado/hot sauce burritos. From here, we headed north to meet up with Joe Curren. Humboldt County.

The nice thing about traveling in a van versus the air is that you can bring all the gear you would have otherwise dismissed due to baggage fees or practicality. We loaded the van. A cooler of bananas, 12 avocados, hot sauce, tortillas, kefir, half-n-half, a 12-pack of beer – the essentials. We resituated the trunk to hold a few bags of clothes. Pillows and sleeping bags filled the back and of the van, all held down by a pellet gun. A bucket of fly fishing gear, axes, knives, gum boots and swim fins all slid in. Bags of 35mm film under every seat and wrist rockets on the dash. The roof rack held tents, wetsuits, and miscellaneous camping gear. A rocket box housed six surfboards while two laid inside. Two skateboards jammed in. CLIF bars and Trader Joe’s spicy cashews in every cup holder and a five-gallon jug of water completed the pack job.

Jeremy Koreski is a Tofino born-and-raised, photographing superhero. I’ve stayed with him each time I’ve been there. He flew to San Francisco to meet up with us and make the drive. 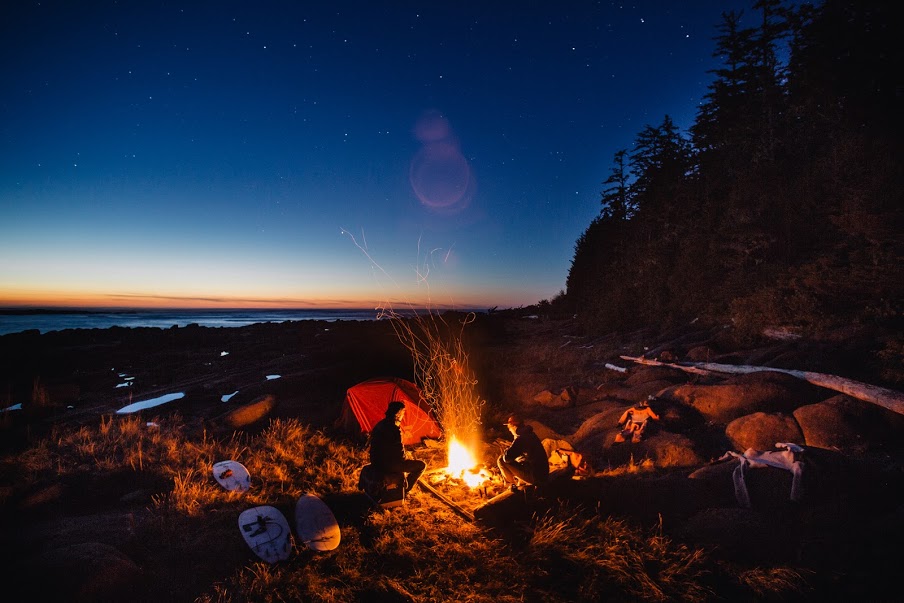 The crew settles down for a much needed warm-up by the fire. “Usually while camping at this spot, it’s raining. This time there wasn’t a cloud in the sky, allowing us to camp under the stars for the first time here.” –Jeremy Koreski 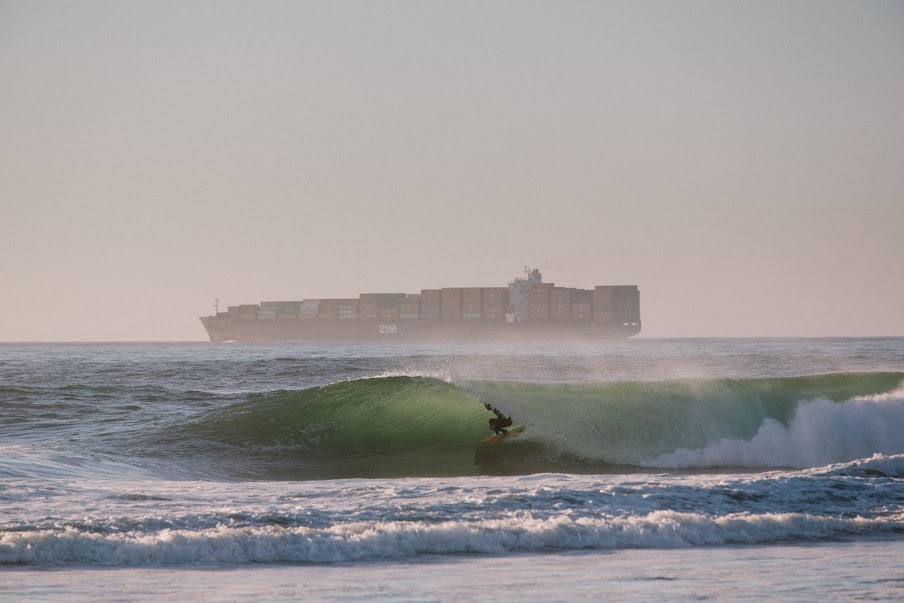 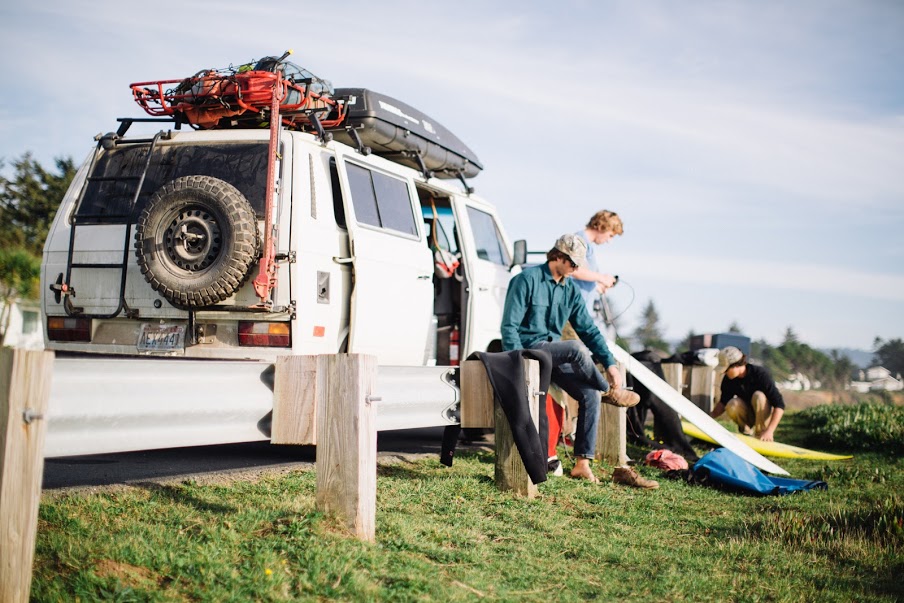 We met up with Joe Curren and he showed us around some of his local surf spots. Here the crew gets ready to head out for a quick session. Northern California. 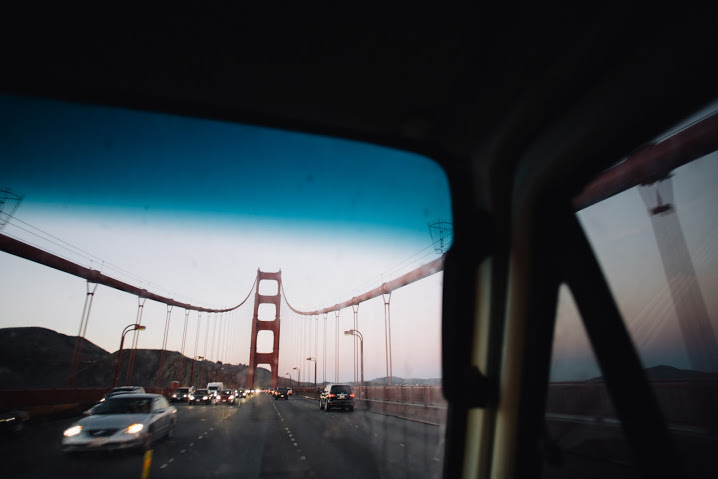 After a great surf in San Francisco, the van was packed to the brim with gear and groceries for the stretch ahead. Golden Gate Bridge. 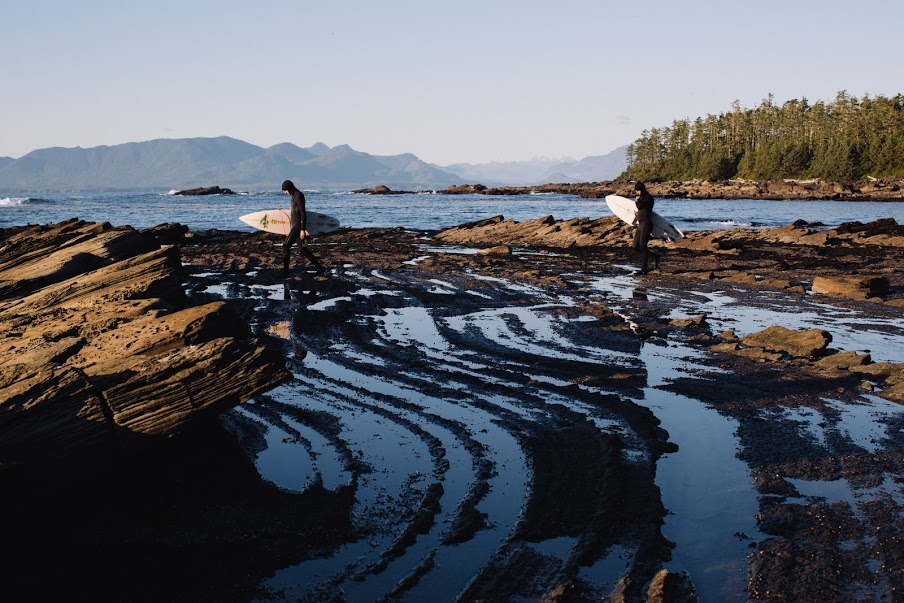 After unloading the boat and setting up camp, we had an hour or so to surf before night fell. Trevor and Foster running out over the rocks somewhere off Vancouver Island. 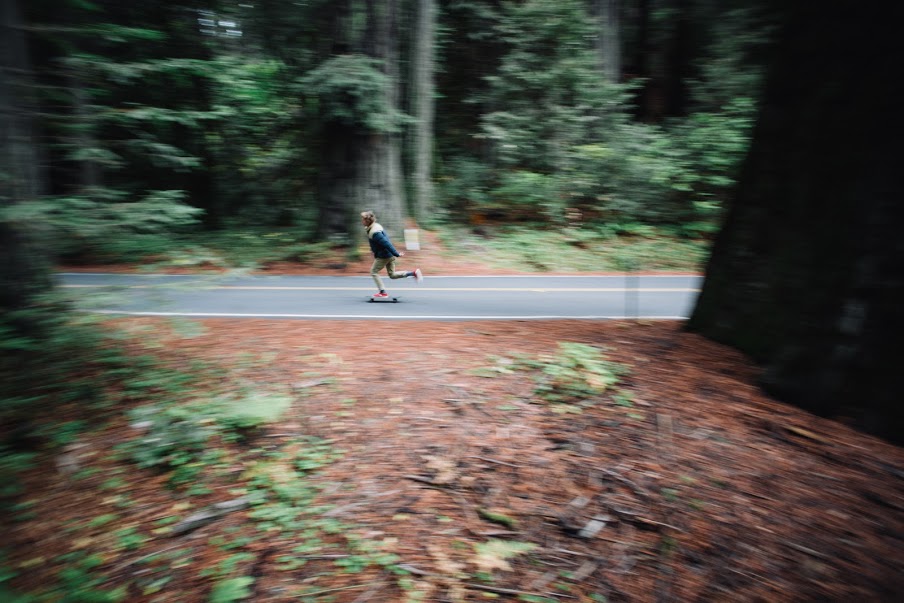 Foster stretching his legs after a long drive through Humboldt County, California. 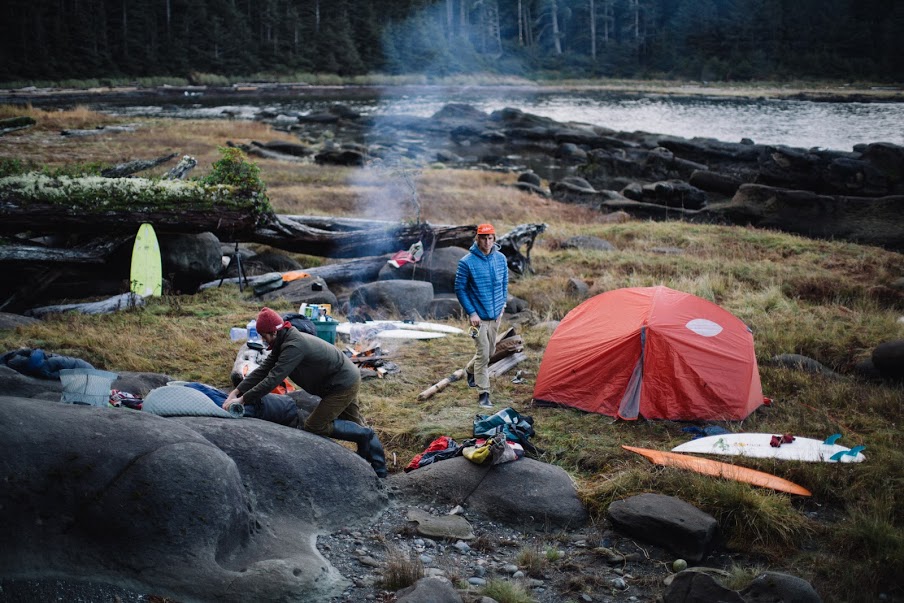 We awoke to dense clouds and an incoming storm. After coffee and breakfast, we packed the gear tight for the long ride back to Tofino. 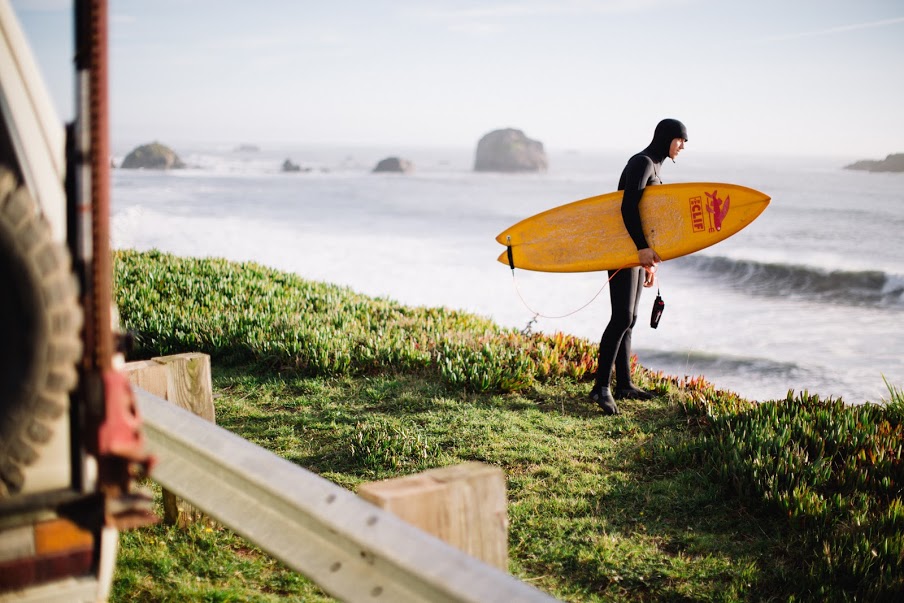 Trevor looking out the back for the men in grey while also finding a way down the cliff. Northern California. 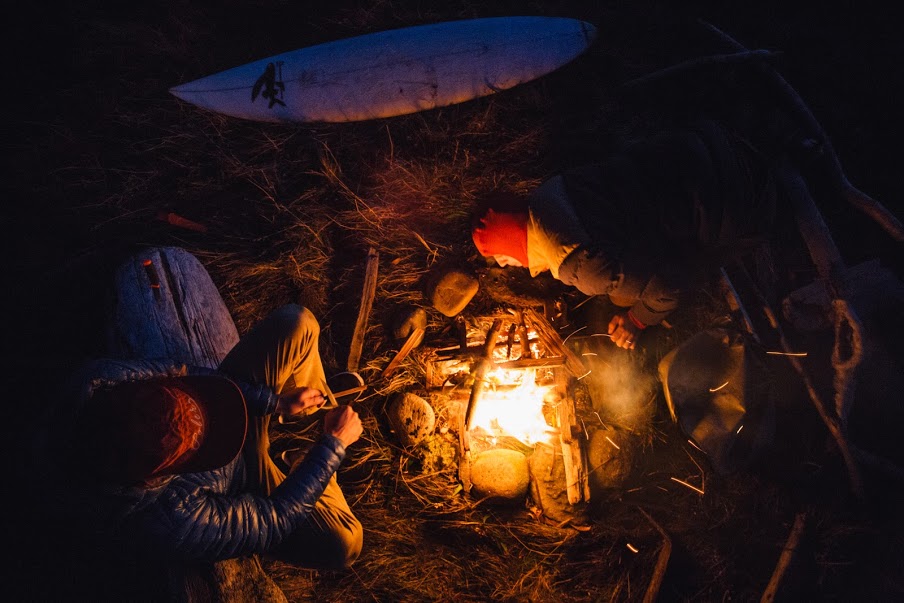 It had been raining for a few weeks straight before this trip. Trevor trying to get the wet – but seemingly dry – wood to ignite. 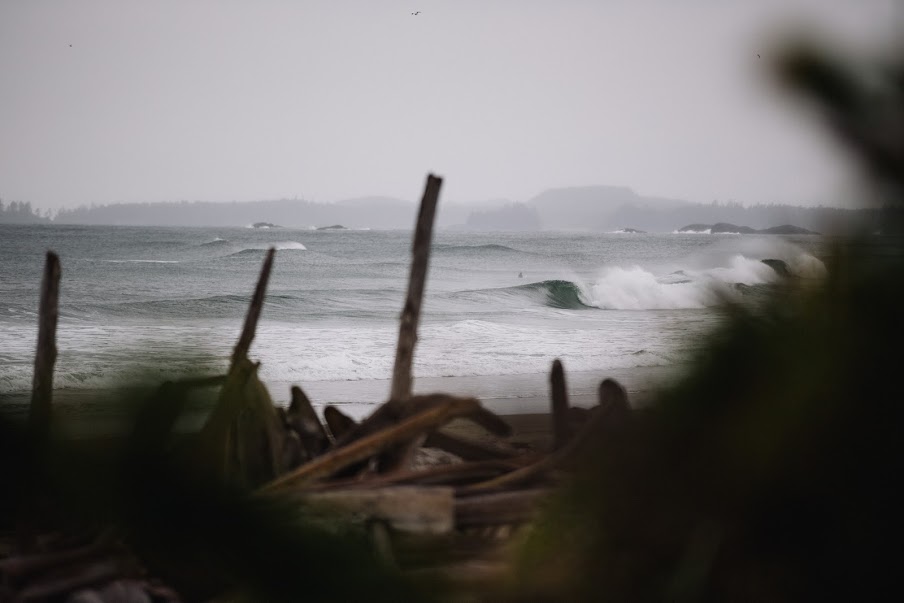 Accessible by van, we found some nice clean offshore waves close to Tofino. 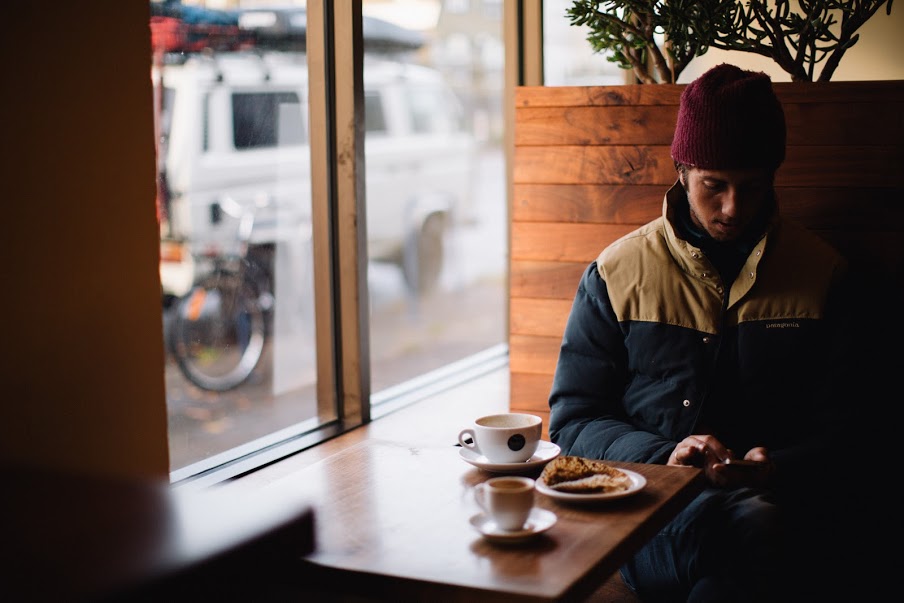 After a night spent in the van in the suburbs of Portland, Ore., a fine cup of coffee and a finger dance session were in play. 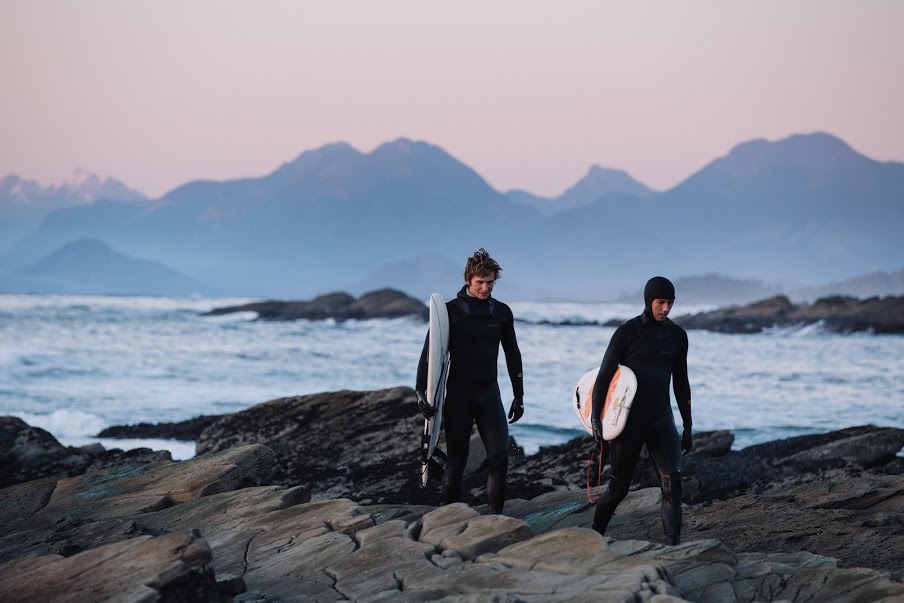 In Canada’s autumn, night comes quickly and so does the cold. Trevor Gordon and Foster Huntington scrambling back to camp to get the fire going. 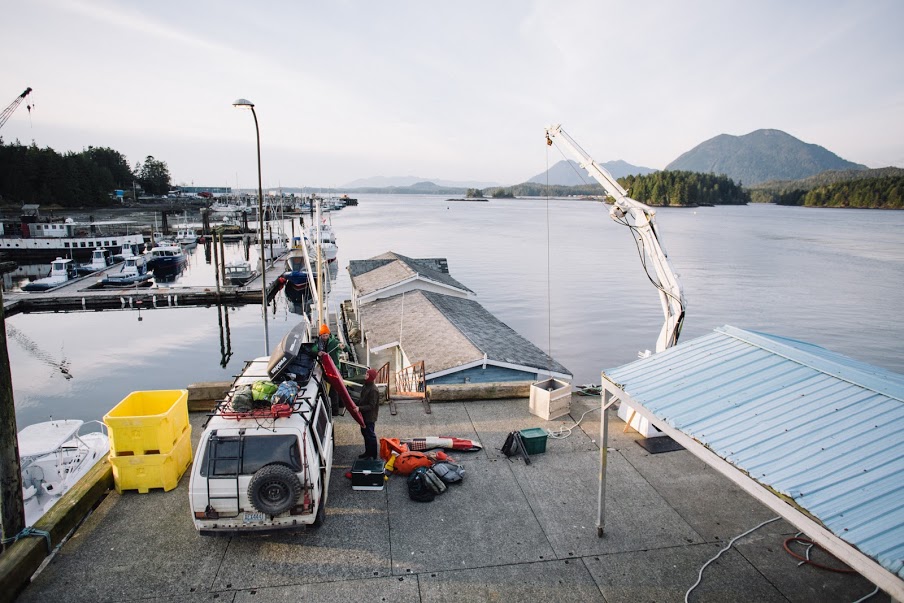 The crew packing the van back up after camping out at the surf for two days. 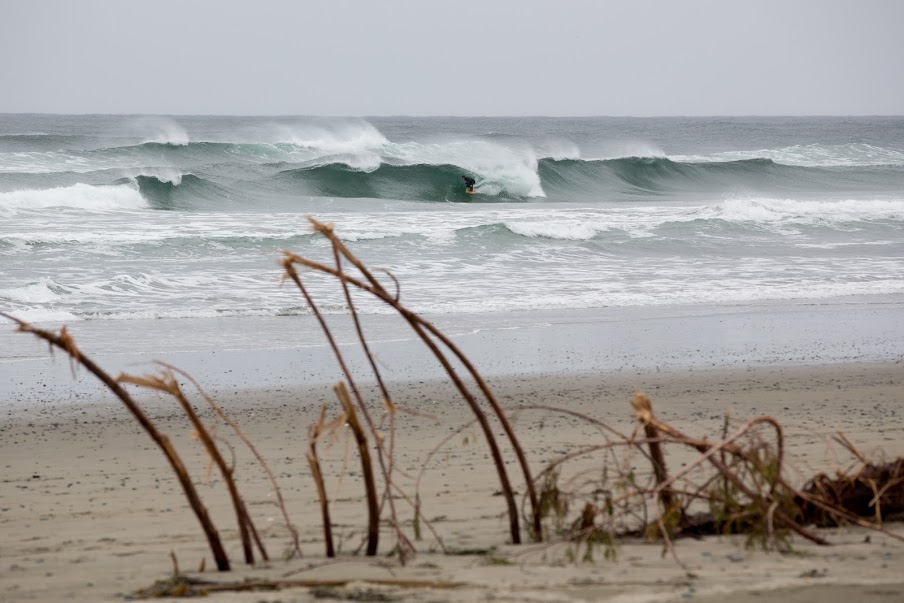 The land twists and turns so much in BC that even during a stormy day like this, there are places where you can find some hidden gems. Trevor Gordon sneaking into a fun one. 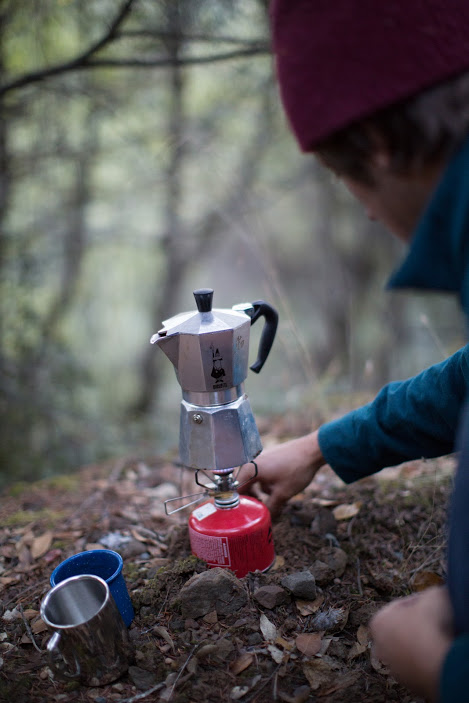 This night, we camped along a logging road somewhere in California’s Humboldt County. Every hour that night, a logging truck would rumble by. T, making some wake up. 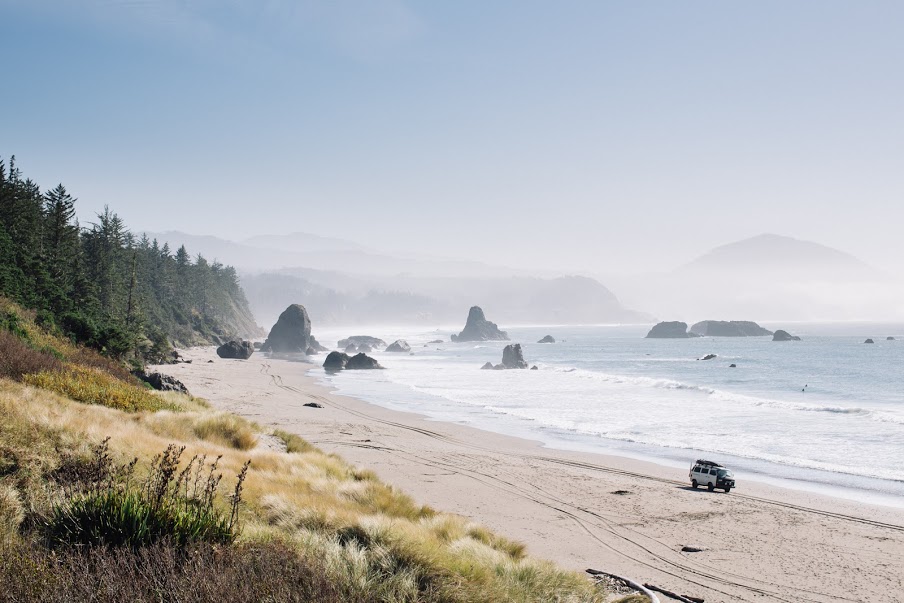 The van taking the shortcut to go look around the bend for more southern Oregon surf possibilities. Some close deep-sand calls later, we decided against a surf and went for a flyfishing mission further up the coast. 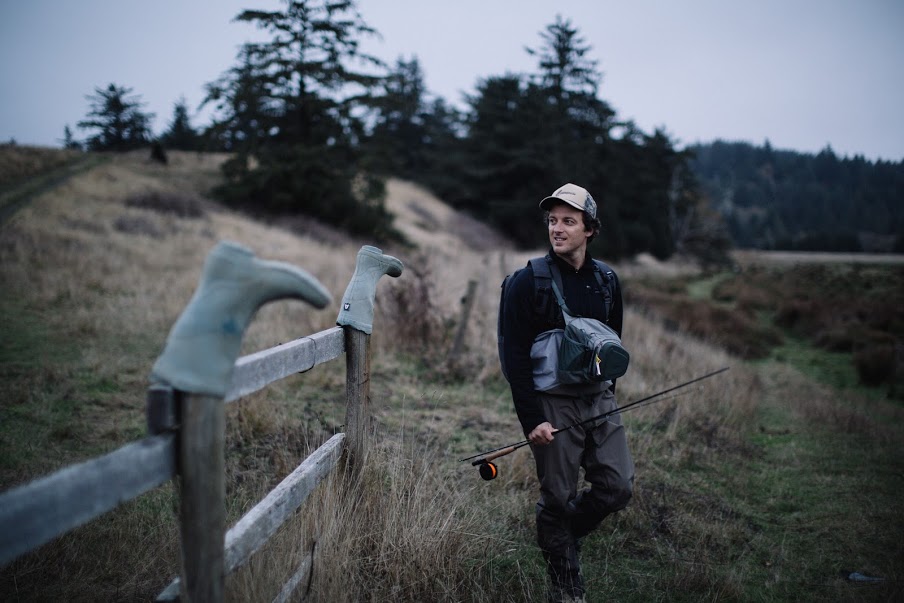 Unloading the gear out of the van and into the boat. Tofino Marina. 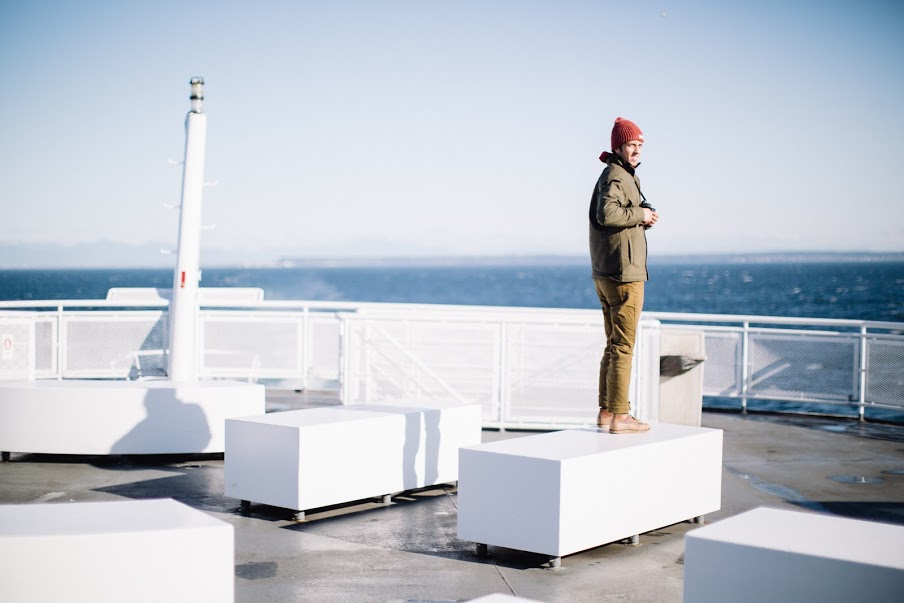 After getting turned around at the U.S./Canada border for having a high-powered pellet gun (we mailed it back home), we plopped the van on the ferry and headed towards Vancouver Island. 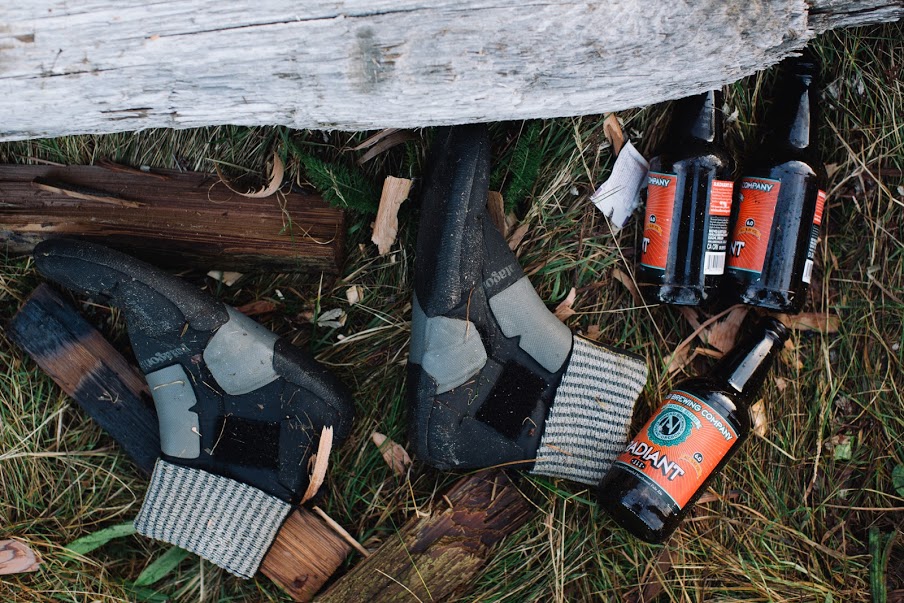 Just a few necessities for camping in the Pacific Northwest.

Trevor Gordon is a Patagonia surf ambassador and artist from Santa Barbara, California. He enjoys experimenting with alternative surf equipment and traveling in search of exotic and uncrowded surf. Check out Trevor’s paintings and book projects at trevorgordonarts.com.

Jeremy Koreski is a professional photographer based on the west coast of Canada. Born and raised in the small town of Tofino, B.C., Koreski has been shooting outdoor life, coastal culture and action sports since his teens.