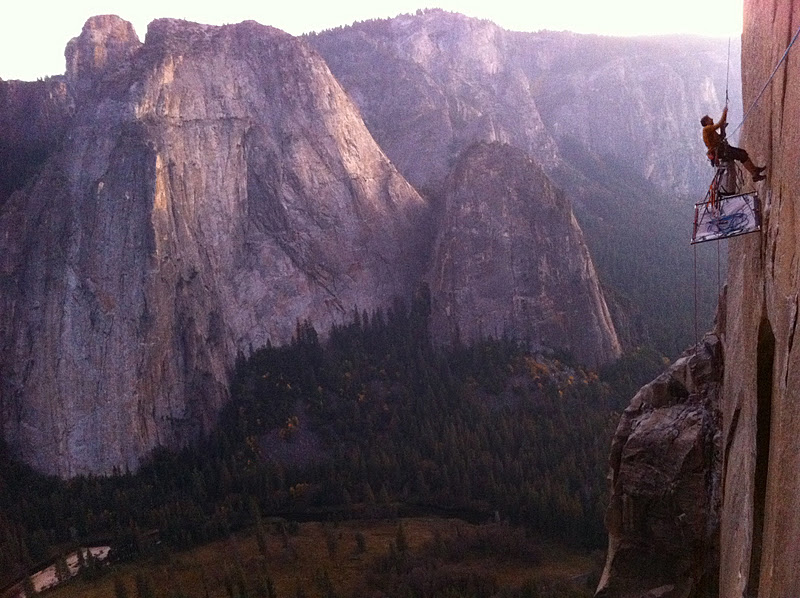 “No send tonight. But the craziness of the situation struck me. Trying to climb 5.14 by headlamp during a super intense wind storm. Strangely invigorating. I love the experience but am still overwhelmed by the magnitude of this project.”

I’ve often been a crusty bastard about from-the-route publicity. Ironic, I know, and indeed we all want to draw the circle around ourselves, starting with my going, “yeah but…” and explaining how my propensity to spray on the interwebs is soooo different from all that “bullshit” out there. Right. And I generally stick to it. I’m a fan of send first, spray second. That comes mostly from an alpine climbing mentality – it’s hard to imagine how you can be doing something that’s invariably publicized as “futuristic” or “cutting edge” if…hmmm…well, uh, so then, how did the camera guy get up there?

Yeah but, Tommy’s Dawn Wall climb really is different. Different in that it’s so – yes, futuristic – difficult that Tommy’s not climbing it in some lightweight (ie. easy?) push. When you’re doing a pitch or two a day (notwithstanding the final planned day of 12 pitches up to a mere 5.13, if it all works out), then on those slow days, when you’re redpointing 5.14+, does it affect anything to have a media circus shooting photos and video?

Let’s also remember that it’s a roadside climb. You can hike to the top of El Cap and rap in right on top of him. Some irony exists, in a way, in how we so revere El Capitan – with very very good reason – yet nowadays it’s a fully public arena. Telescopes in the meadow, theEl Cap Report, regular posts on Supertopo.com, traffic jams as tourists watch the clamberin’. 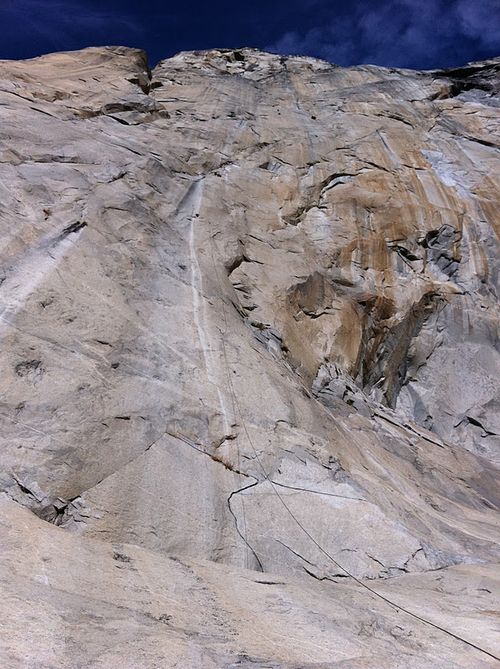 And so, if you happen to be the most accomplished bigwall free climber in history, and have freed a record eleven different routes on El Capitan – including a feat of Olympic proportions in freeing both the Nose and Free Rider in one day – and your current project is on – yes – El Cap, what should you do? Try in vain to be invisible? That’s not only impossible, but counterproductive for a professional climber. Would it be more legit if he were mopping floors and climbing at a more ordinary level? Tommy is one of a handful of folks who are legitimate professional climbers (side note: with due respect to living in a van down by the river and working as little as possible, both of which I fully favor, if you live in your vehicle, or your parents’ basement, and earn less than a janitor, I humbly suggest that you are a professional dirtbag – something, again, I respect (hell, I’ve made a career of it). I’d say let’s call it like it is and drop the laughable “Yeah babe, I’m a pro climber” phrase commonly slung around crags and barrooms; not that it matters).

I’m psyched to see Tommy’s from-the-wall Facebook posts, the photos, and the video footage. It doesn’t seem to be affecting his climbing. Not negatively, anyway (his belayers are jugging with his iPhone, so he’s not dragging any extra weight). We live in a different era than the pioneers who put El Cap and Yosemite on the world map. It doesn’t mean that everything must be Facebookified and blogged in real time. But when a mind-blowing effort is underway, and happening in a way that lends itself to voyeurism, and our following has no detriment to the athlete’s efforts, well, maybe I’ll lose my cruster stripes by saying this, but I’m cool with it. More so, I’m tuning in. I guess the world always changes, and we pick and choose our battles, just like we pick and choose our media. 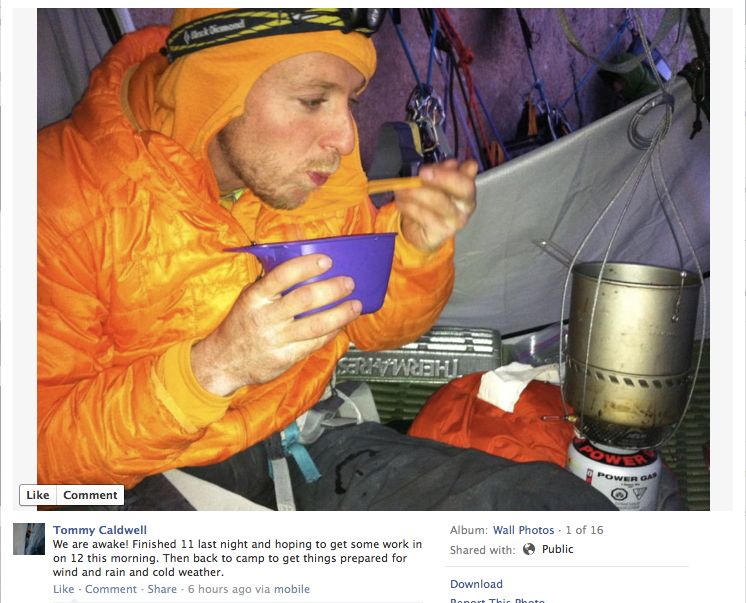 The other day, between texts and phone tag, Tommy answered some of my questions about this whole media thing, about being so public and open about his attempt. He’d just finished his second day on his Dawn Wall push, was seven pitches up and hanging in the portaledge, writing on his iPhone from the wall:

“In the past all my climbing has been done in a pretty solitary fashion. Me, my partner, and not too many people knew what was going on until after it happened. As a professional climber, a few years ago I realized that the whole media world in climbing was changing.

Although it felt a bit unnatural at first, I decided to embrace the circus on this project. There are many reasons for this. First of all, it becomes a circus whether I like it or not. The Ask a Climber Program here in Yosemite has put the climbers on El Cap on display. There are daily blog updates complete with photos of what is going on. If you can’t fight ‘em, might as well join ‘em.

Also, this has been a really drawn out project. I have been hitting it pretty hard for two years and dabbling for two years before that. It’s part of my job to let people know that I am not just sitting on the couch all these years.

It’s also been really fun having all the photographers and filmmakers on the wall with us. They are all my close friends and El Cap makes for an amazing place to get to know people. There have been so many people supporting me and it’s fun to have them up here. Our logistics have made it easy. With some decent jugging skills you can get to our ledge camp in a hour.”

An unlikely twist came to mind regarding Tommy’s high-profile Dawn Wall attempt: the most cutting edge ascents in history have necessarily been climbs where top climbers fully embraced failure, were even likely to fail but somehow managed the improbable, even “impossible.” This usually happened in relative solitude. But letting the world watch while you try, fail, try, fail again, and maybe, hopefully, succeed? Hell yeah, he’s embracing it.

At least that’s how I look at it. What do you think?