Kind thanks to Patagonia Chicago’s Kelley Freridge-Olson and Derek Schnake for today’s update on recent events at Patagonia Chicago store. People often laughed at the thought of cleaning up the Chicago River and other area waters. Thanks to the efforts of some committed citizens that skepticism is fading. – Ed 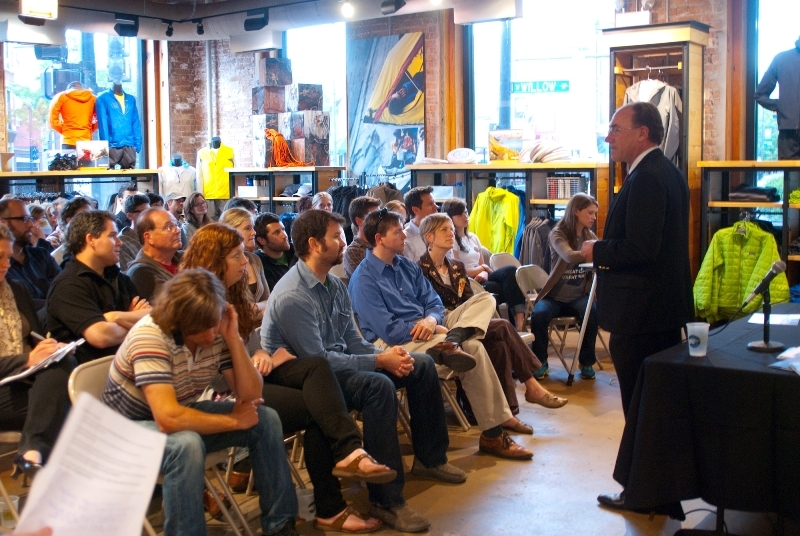 For most Chicagoans, the Chicago River is a putrid vein of sewage water. In fact, Chicago’s water quality has become such a farce that many residents laughed when President Obama ordered to make the river safe for swimmers. Of course, it’s not just the river either; we’ve come to expect regular beach closings due to E. coli levels and other toxic concentrations.

It wouldn’t be a surprise to find a multitude of jaded attitudes among Chicagoans when it comes to water quality. So when Patagonia Chicago and The Alliance for the Great Lakes announced they were hosting a Great Lakes Awareness Event, in which residents could voice their opinions about where to emphasize a $10,000 grant, I didn’t expect much of a turn out.

But there I sat, shoulder to shoulder in a crowded room, with a young triathlete on my left and a grizzled old angler on my right. We waited in anticipation to hear from a panel of three water conservation experts. Before we started, Stephanie Smith—the Alliance’s Education Program Director and overseer of its successful Adopt-a-Beach program—asked the audience to close their eyes and recall their favorite Great Lakes location.

“How many of you had more than one spot?” Smith asked. As a sea of hands shot into the air, there was a nostalgic murmur among the crowd as we all thought of best memories swimming, sailing, fishing and paddling in the largest freshwater system on the continent. For the audience, those memories and those idyllic spots were at stake.

The first presenter, Mary Lammert Khoury, an ecologist for the Nature Conservancy, came to argue for more funding for fighting invasive species. While the most important solution, Khoury pointed out, is prevention, there is still a need for ecological solutions to controlling invasive species.

She was preaching to the choir, so it seemed, as this crowd was well informed. That grizzled old angler to my right made sure to interrupt the ecologist’s presentation, giving the audience a thorough history of the introduction of these species. One woman from the back pointed out that Khoury made no mention of invasive plant species, only fish. This was a sharp audience indeed.

Khoury fielded the questions gracefully and then addressed a much-anticipated topic of the night: The dreaded Asian carp. She explained to a captivated crowd that according to breakthrough environmental DNA (eDNA) techniques, the Nature Conservancy was able to confirm fears that the Asian carp was much closer to invading the Great Lakes than previously thought.

With the crowd inspired and informed, Khoury handed the floor to Tom Barrett, the owner of Green Water Infrastructure—a consulting company committed to efficient management of water resources.

Barrett, undoubtedly a seasoned speaker, unleashed a litany of storm water statistics on the audience. For a city like Chicago, he said, the average city block displaces and collects nearly 10 billion gallons of water per year. For most of the audience, these statistics conjured images of recent severe thunderstorms that passed through the city, flooding overburdened drainage systems.

While Barrett spoke glowingly about the prospects of gorgeous rain gardens—which he proclaimed would cut fifty storm water overflow events per year to two—and permeable pavement used in some Chicago suburbs, the dollar signs kept the crowd’s enthusiasm pinned to the floor. Where else is permeable pavement used? Is it durable? How do we convince a Chicago municipal government to actually do some of this? Barrett did his best to quell the swelling skepticism by giving examples of storm water successes in Indianapolis and pointed out Chicago’s leading status in the green roof movement.

Jessica Dexter, a staff attorney for the Environmental Law and Policy Center presented last and she picked up right where Barrett left off: waste water management. She pressed the audience to consider the health implications of stagnant sewage water, but the audience needed no reminder.

Where Khoury and Barrett represented organizations doing hands-on work, Dexter and ELPC were the legal warriors. Their legal action helped to roadblock BP’s increase of pollution into the Great Lakes in 2007, and persuade the Illinois Pollution Control Board to enforce a new rule limiting the amount of phosphorous in runoff wastewater in Chicago industrial plants.

In their most recent victory, ELPC pressured the Metropolitan Water Reclamation District to disinfect all sewage water from its Northside and Calumet treatment plants.

Once Dexter’s presentation was finished, it was voting time. The audience spent some time deliberating with each other, and then submitted their ballot for which issue best deserved the $10,000 worth of attention. With the votes counted, it appeared that the issues of wastewater management and invasive species tied; the Alliance would have to split time between Asian carp and overburdened sewage systems.

But there definitely weren’t any losers. The audience left with a comprehensive understanding of the freshwater challenges that face Chicago and its citizens. More importantly, we now know who our allies are in the fight to clean up our waters.

The Surfrider Foundation/Chicago Chapter hosted a successful beach cleanup this past weekend at Montrose Beach for International Surf Day. Hearty thanks go out to all those who participated. Locals who missed their chance to help out can find more ways to get involved through the Surfrider Foundation, or by taking action with The Alliance for the Great Lakes.