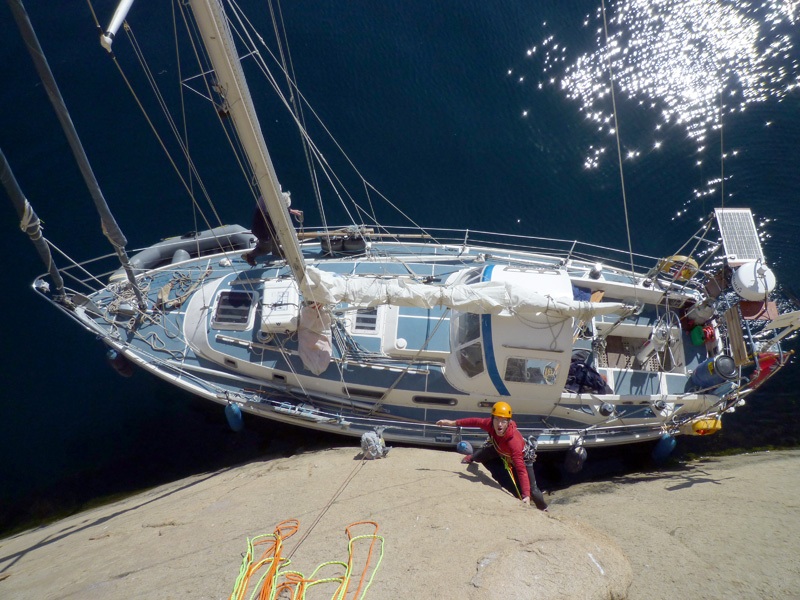 Earlier we told you about Patagonia ambassadors Nicolas Favresse and Sean Villanueva, and their current climbing trip: Greenland Vertical Sailing 2010. Nico and Sean, along with Olivier Favresse and Ben Ditto have stowed aboard Captain Bob Shepton's boat to sail the west coast of Greenland looking for virgin big walls to explore. We thought their last trip to Baffin Island was wild (check out the DVD) but this one is already off the hook. So far it seems like part Liz Clark Voyage and part 180° South, with plenty of boat hijinks and surprises along the way. Let's get you caught up on their trip. [Ben Ditto getting started out of the boat on "Seagulls Garden." Photo: Nico Favresse]

June 26 – Bob & Dodo’s Delight
We finally met our reverend captain Bob! He’s the perfect man for the job: he seems even less organized than us. He’s 75 years old, not 65 like we communicated earlier, and in great form. In all his years of experience he only sank one boat! He used to be a fanatic rock climber before he was sailor.

The boat is floating … barely. With 600 kg of food and rock
climbing gear, and 400L of water, we never thought everything would fit
in. However, with some stuffing we managed to push everything into the
boat and there is just about enough space left for four and a half
humans.

The boat has a few technical issues we are trying to solve before we launch into the wild. 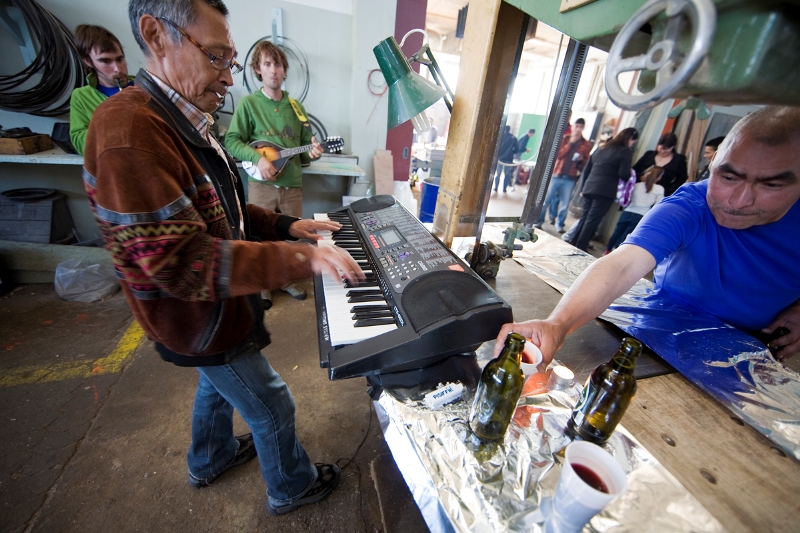 [The band plays the first gig of their Greenland tour with a guest piano player in the Sisak Teknik boat yard on Greenland Day. Photo: Ben Ditto] 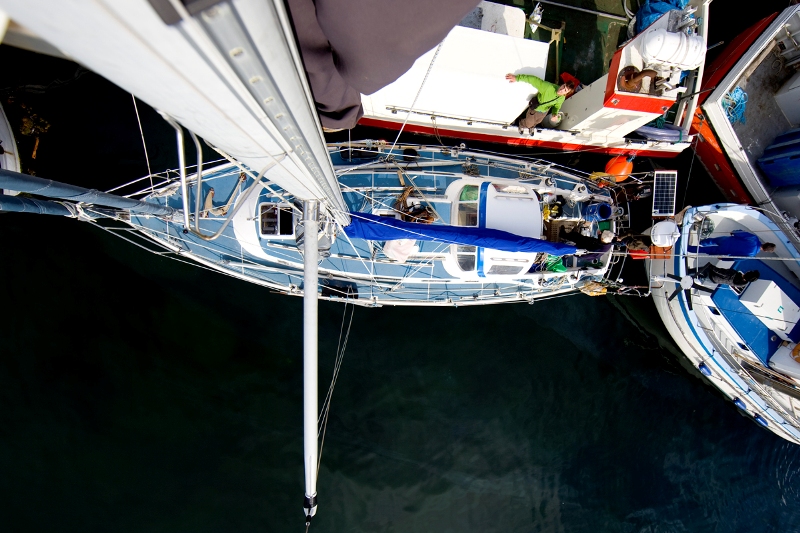 [Bird's eye view of the Dodo Delight as we prepare her for the sea. Photo: Ben Ditto] 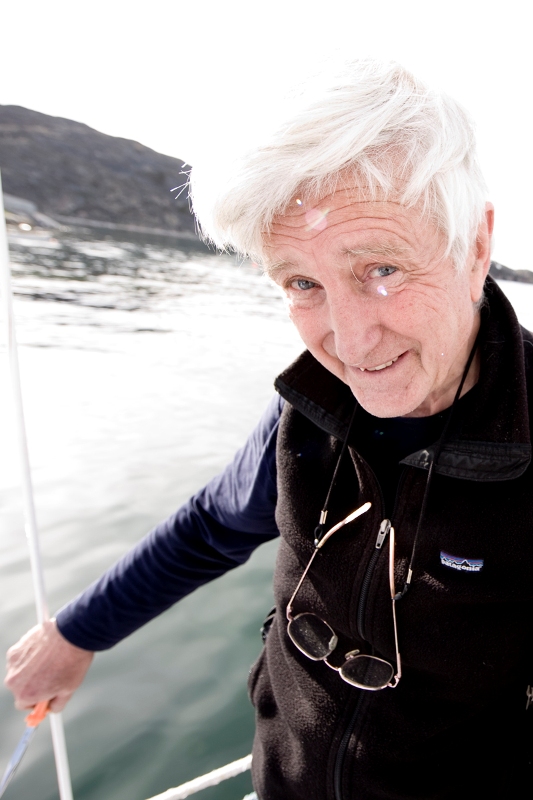 July 1 – Sailing Time
We unleashed the boat from the harbor deck of Asiaat and set off to our first target: the Impossible Wall. But first we had to sail 300 miles. Just to make things more interesting Bob threw a wrench into the motor breaking it instantly, forcing us to travel by fair means and continue our voyage by sail alone. This made for some interesting situations sailing against the wind and gave us plenty of time to practice our musical skills to the rhythm of the rocking boat.

This passage was Sean and Ben’s first baptism under sail. Needless to say it was a full experience and some of our delicious dinners were wasted over the side. Long periods of no wind turned the three days of expected sailing time into five, but fortunately we were well prepared for it with all the training tools to sharpen our body for the Impossible. The sailing atmosphere across an iceberg-littered ocean felt like steering a spaceship trough a field of meteoroids. Here we are now very close to the big walls in a small Inuit village called Upernavik. As soon as the motor is fixed we’ll finally be getting into business. 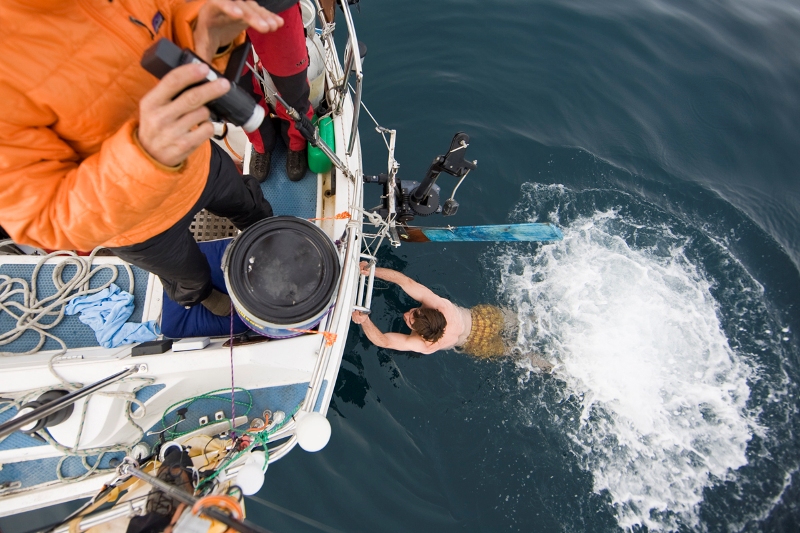 [Sean tries his luck pushing the boat along during a time with low winds and a motor that won't start. Photo: Ben Ditto] 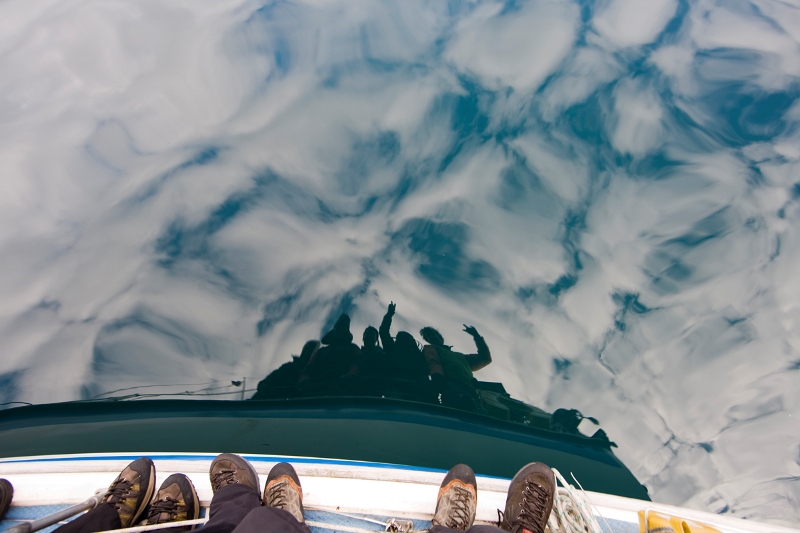 [The team all getting sea sick together on a nice sunny morning heading into Upernavik. Photo: Ben Ditto] 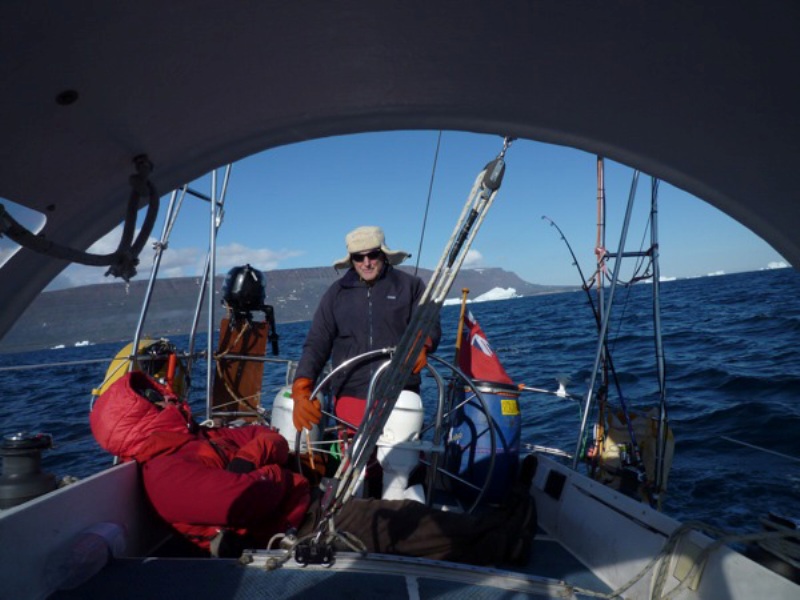 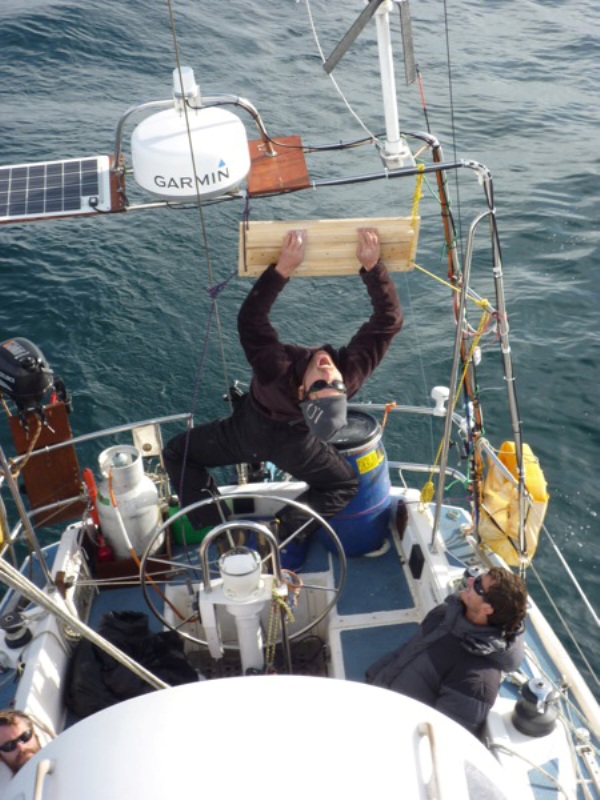 [Training hard. Got to keep them fingers strong! It is the Impossible Wall.]

[At the look out for pirate ships.] 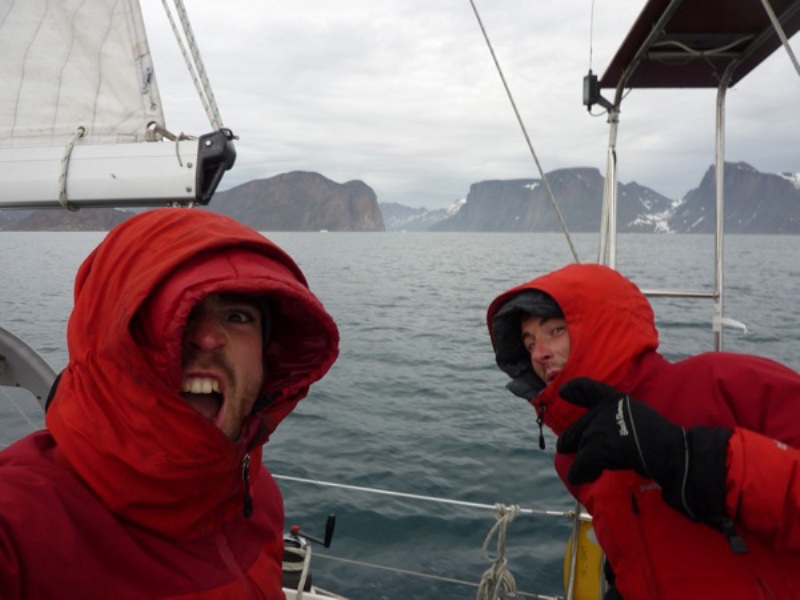 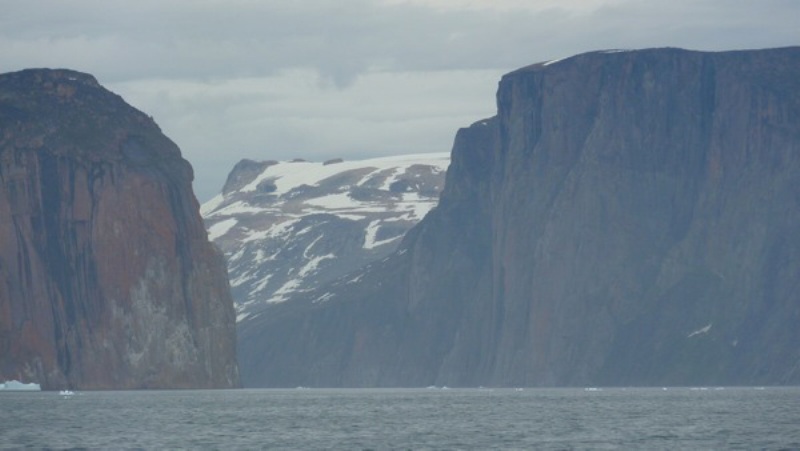 [Some big walls at last!] 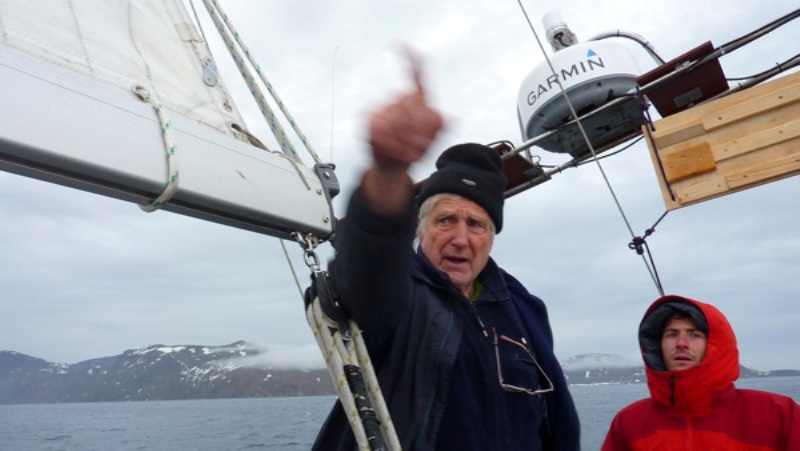 We then decided to go for a warm up on the seagull-filled red wall. We hoped it was red rock and not lichen that gave it this color … it was thick lichen. This in addition to the grass-filled cracks, the bird shit, and the laughing birds made for some pretty adventurous climbing. We split up into two teams: Ben and Nico, and Oli and Sean. Starting the climb was one of the most incredible beginnings we’ve ever done! Bob brought Dodo’s Delight right up against the base of the wall where we had to jump on to the rock, with the intimidating black abyss of the deep sea below us. About 20 hours of climbing later we walked down the other side where Bob was waiting for us anchored next to a Bahamas-like beach. The two new routes, about 400m long, are called Seagull’s Garden and Red Chili Cracker. Now we are back in Upernavik trying to fix the second half of the motor. Hopefully soon enough we will get back to the fjords for some more adventures. 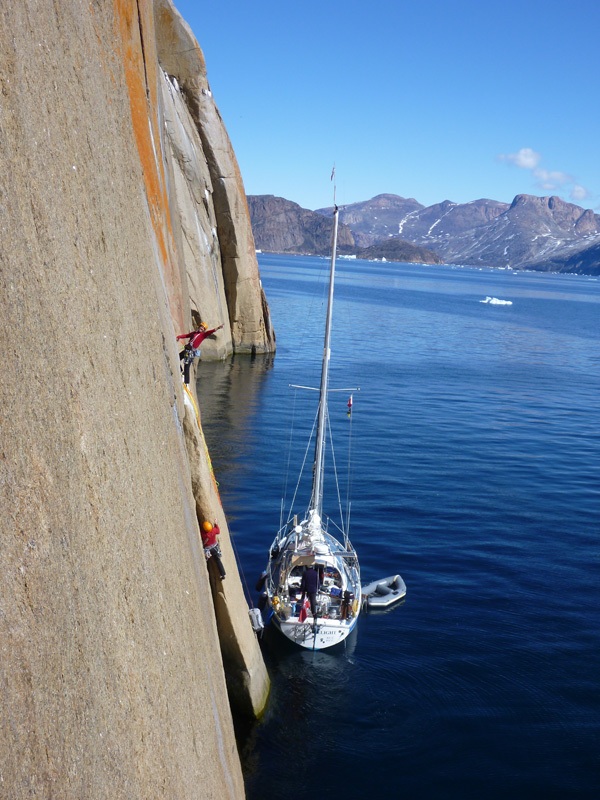 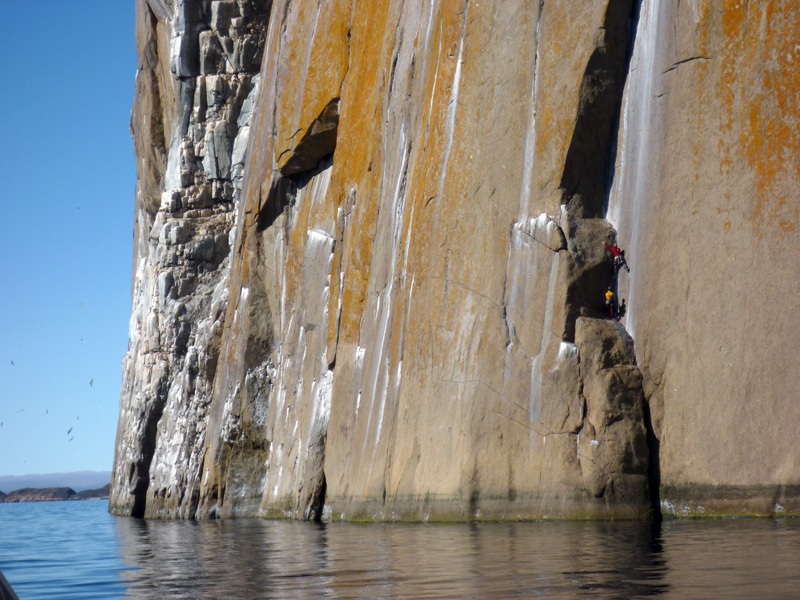 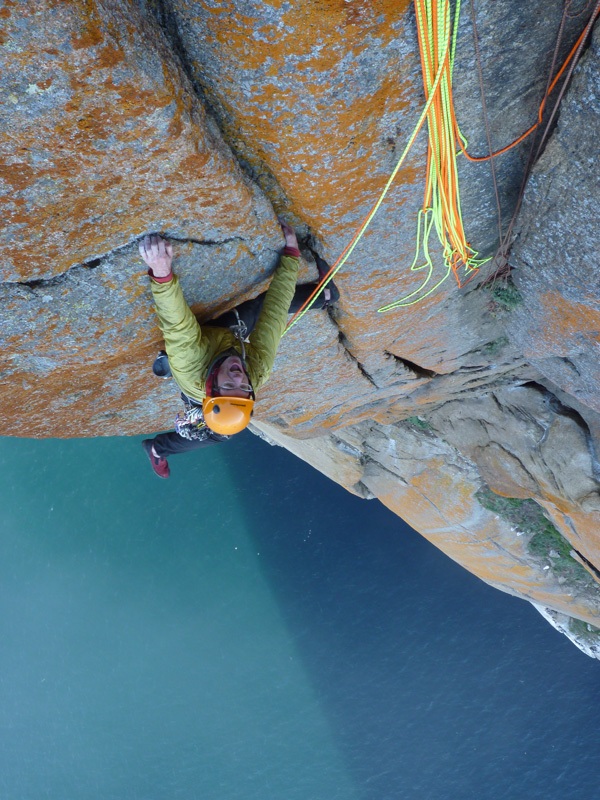 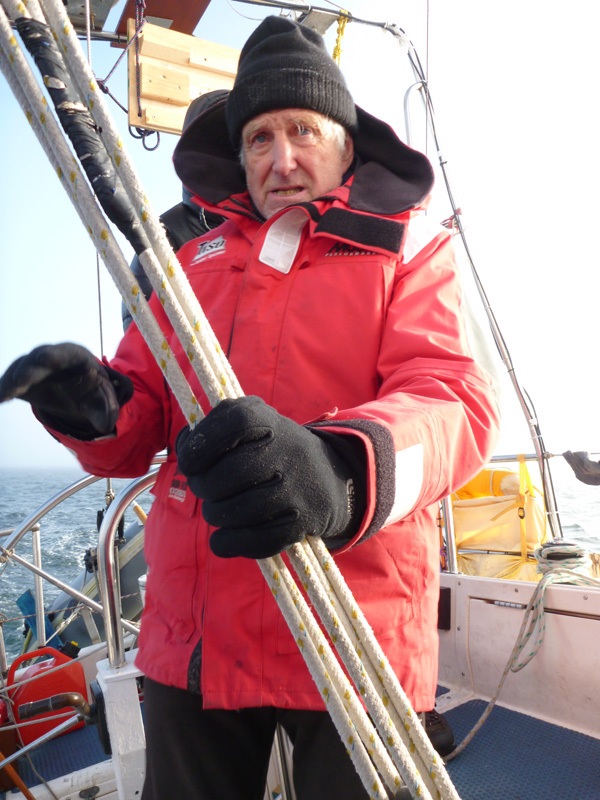 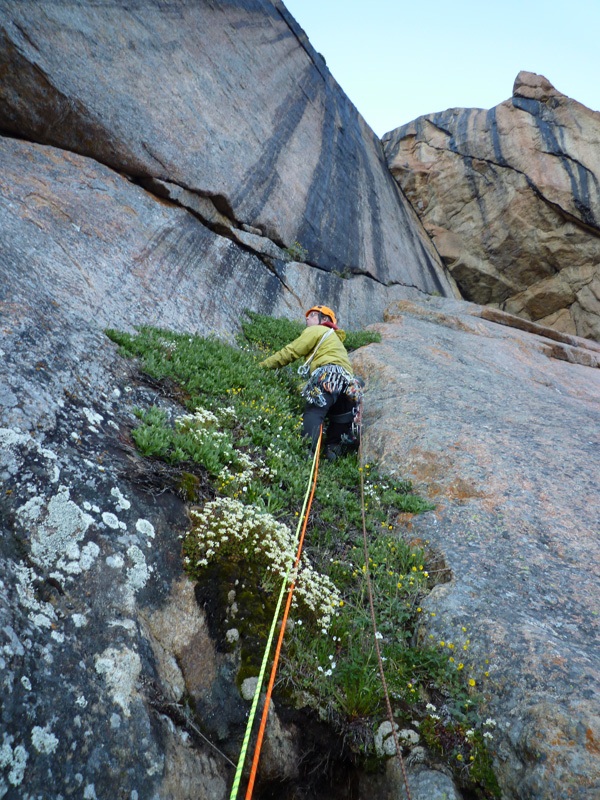 [Ben Ditto enjoying one of the finest pitches of the Seagull's Garden. Photo: Nico Favresse] 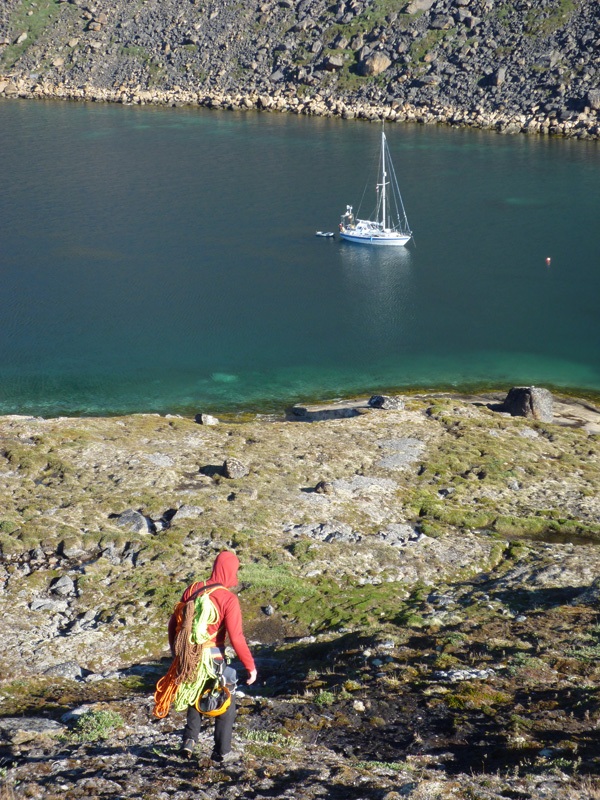 [After a long day/night, getting back to the Dodo Delight. Photo: Nico Favresse] 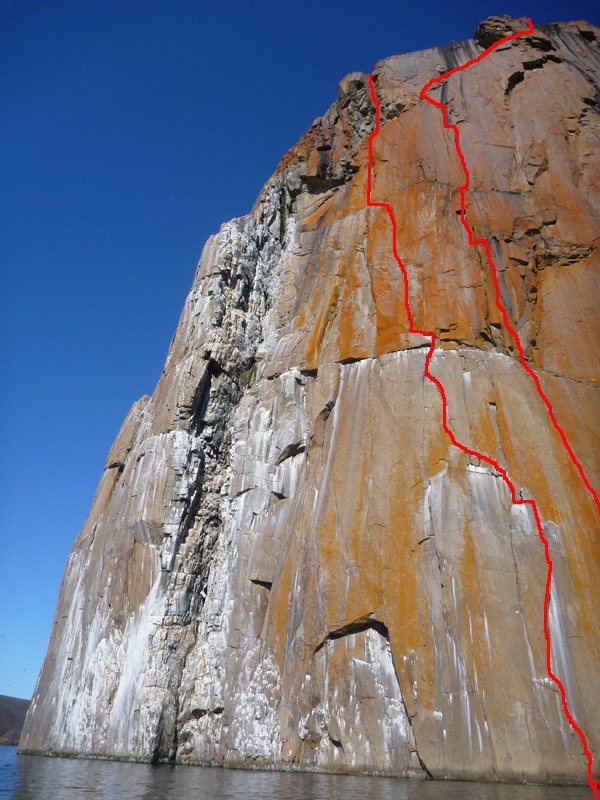 [The Red Wall's new routes: Red Chili Cream Cracker on the left and Seagull's Garden to the right.]

July 12 – Big Wall Island
The motor problems kept coming so we got our hands dirty to attempt repairing it. We were desperate and ready to try about anything to resolve this failure. We came to the final resolution that our last hope was in the hand of a good mechanic. Instead of waiting several days in Upernavik, we asked Bob to drop us off on a wild island for a few days. The main attraction was a beautiful 400m virgin rock face and the challenge to put all our survival skills to the test. Five days later we were happy to see Bob with Dodo’s engine purring smoothly, plus we bagged an amazing new route – Brown Balls – and a bunch of fat cod fish. We are living it up!

As usual, the climbing here doesn’t cease to amaze us: adventurous climbing on super quality lines. Perhaps the best way to describe it is to say it’s like climbing Yosemite classic cracks but with vegetable picking along the way. We love it!

As we are about to launch on a main course kind of climb that could take us a while, you may not hear from us very soon. Let's see! 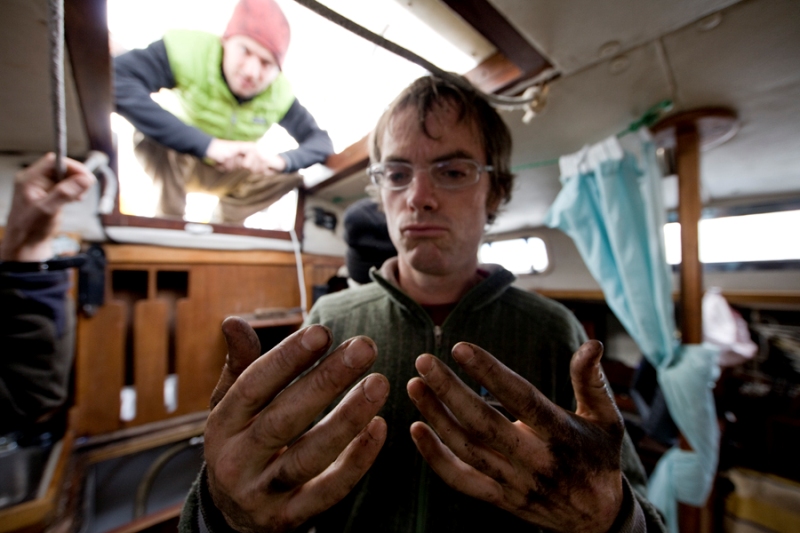 [Ben Ditto in the midst of some dirty mechanical action on the Dodo Delight.] 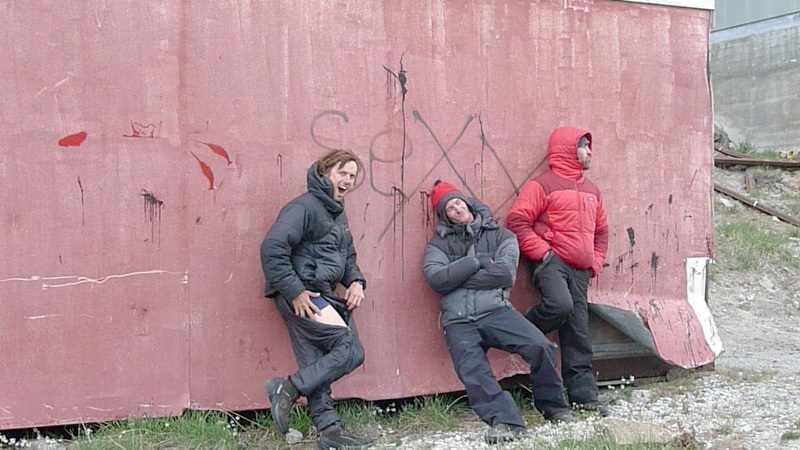 [The boys doing some fundraising for motor repair on the dark streets of Upernavik. They will do anything for a few coins.] 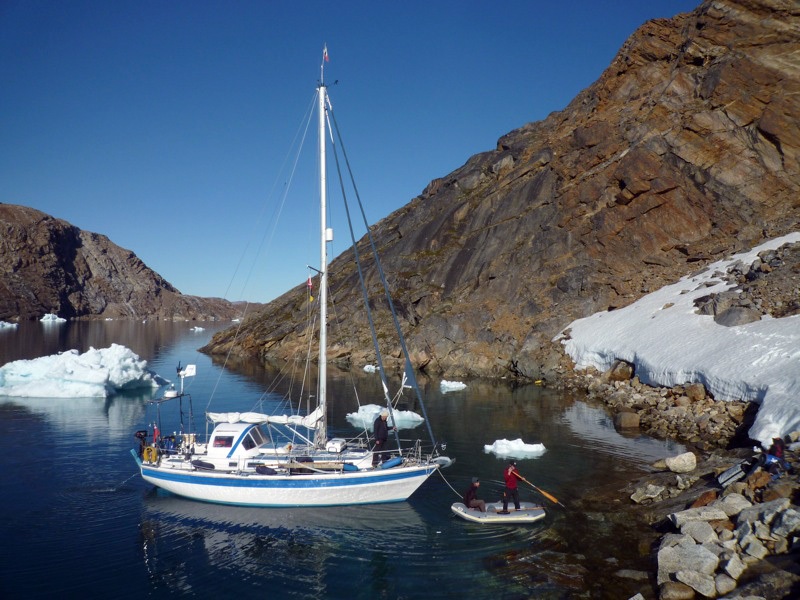 [The last we saw of Reverend Captain Bob and the Dodo Delight for five days while we lived on our island paradise like wild animals.] 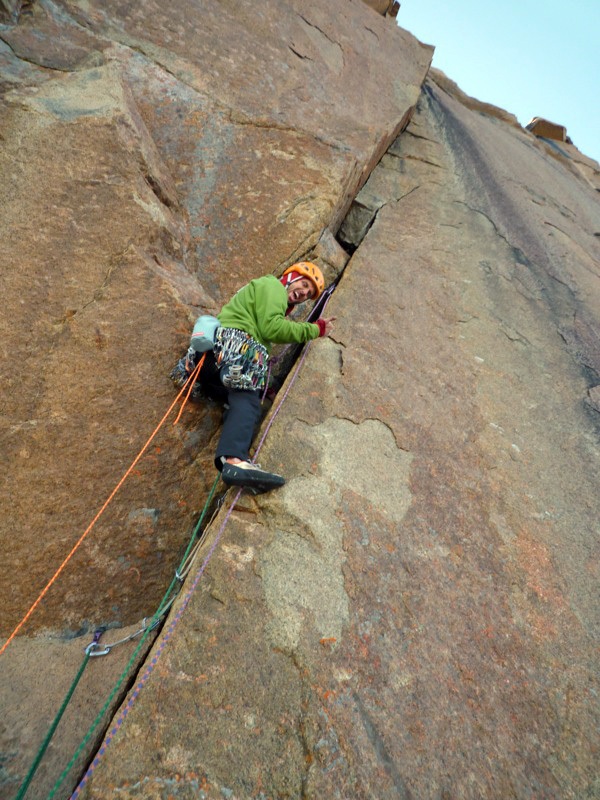 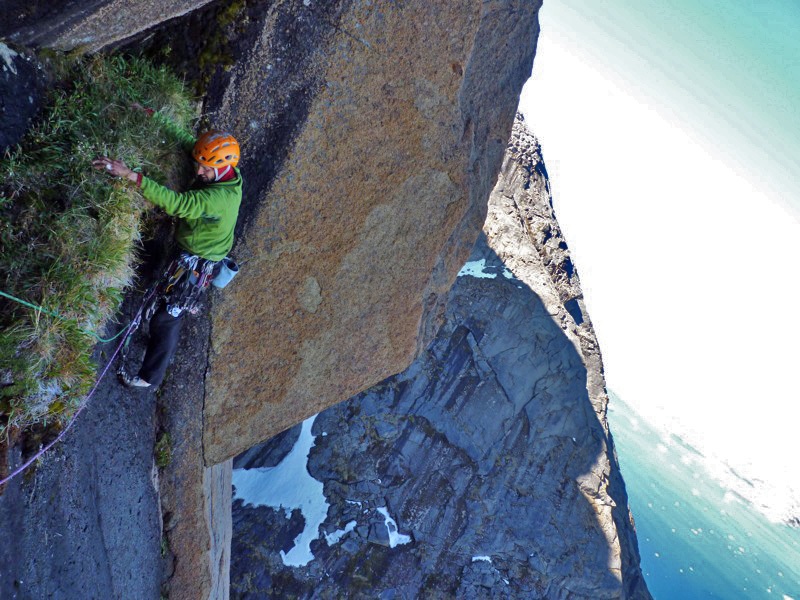 [The crux of the Brown Balls route: a chicken wing dyno to a fist full of grass.] 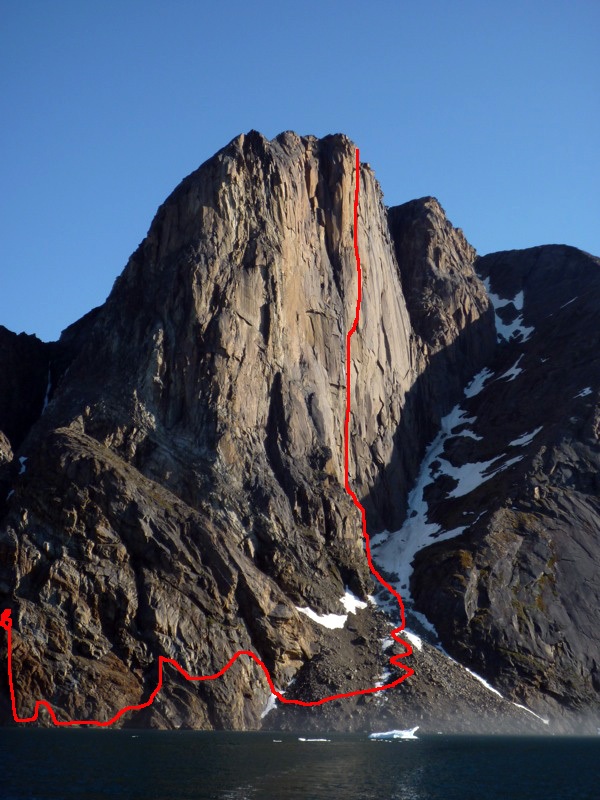 [The Brown Balls Wall, scene of our latest all night party ascent.] 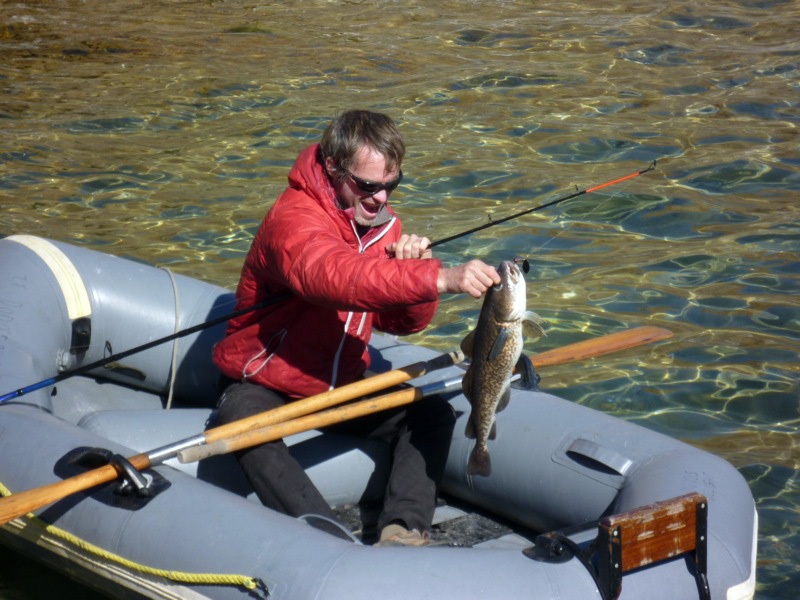 [Ben showing off his big cod.] 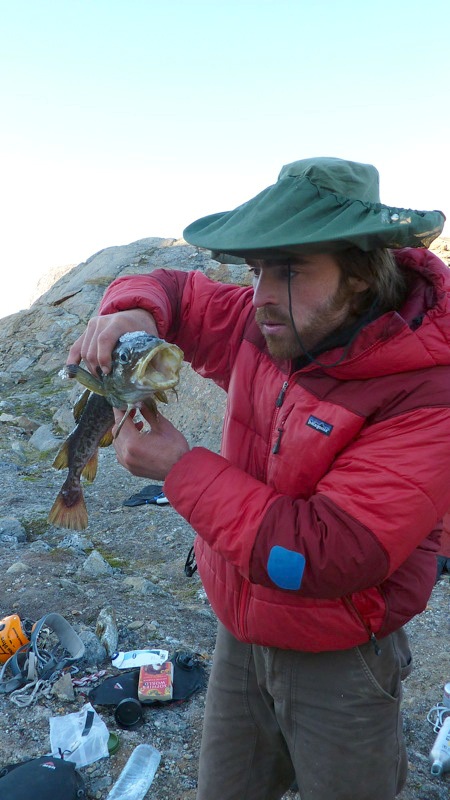 [Which would you rather wake up to?] 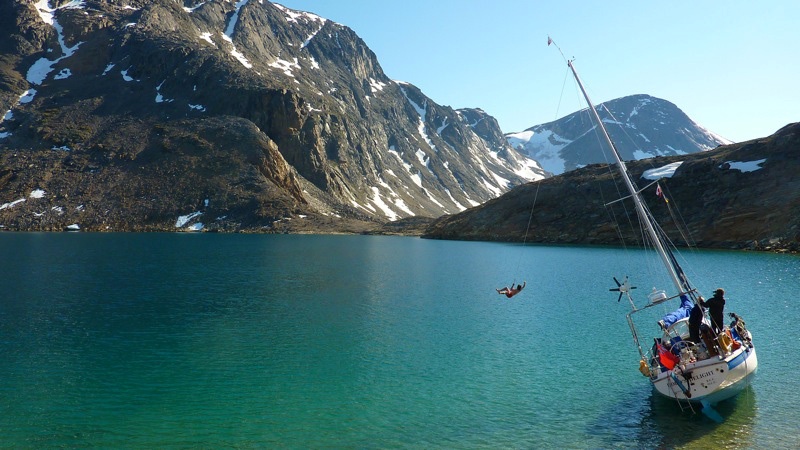 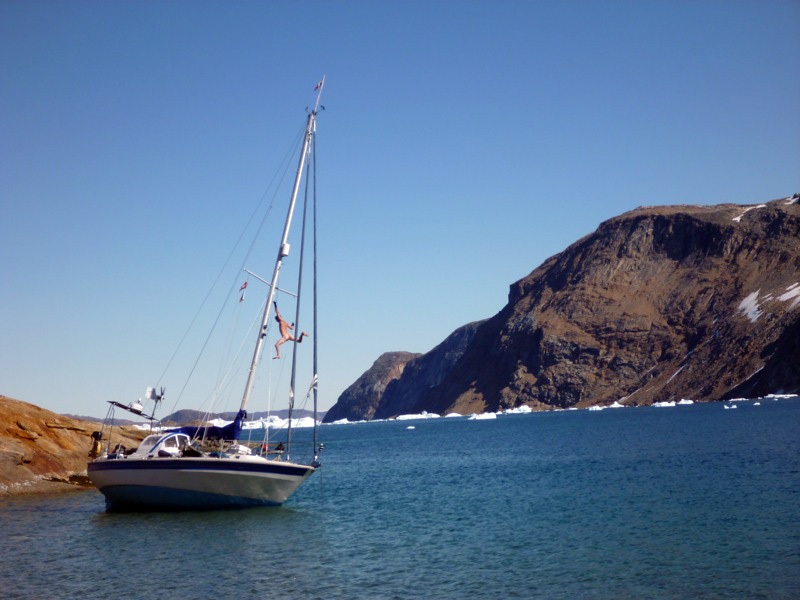 [By the time you see this photo we will be on this wall!]

And finally, a tune the boys cut before leaving, presented in conjunction with the pretty mug of first-mate Favresse – 'tis not for the faint of heart.

Listen to "Drunken Sailor" (MP3 – for mature ears only) 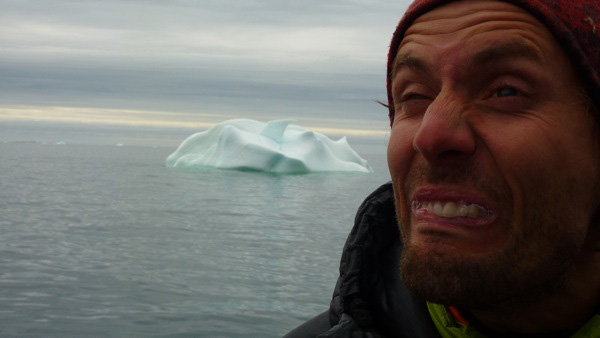 [All photos courtesy of Xpedition.be]