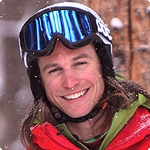 All of us at Patagonia are deeply saddened to share news of the death of Arne Backstrom, our friend and skiing ambassador. Our love and support goes out to the Backstrom family and all of Arne's friends.

Arne (29) was at the height of his professional freeskiing career, having just won the McConkey Cup, the Canadian Freeskiing Championships and the Backcountry.com Sickbird Award. Details of the accident can be read below.

June 6, 2010 – At 9:45 am on June 3rd Arne Backstrom was killed while skiing Pisco (5752 m) in the Llanganuco Valley of the Cordillera Blanca, Peru. With him were Kip Garre and Dave Rosenbarger. The team arrived in Peru on the 28th of May for a month-long ski mountaineering expedition. On June 1st the team established a base camp at 4650 m in the Llanganuco Valley with intentions of climbing and skiing Pisco as apart of their acclimatization process. At 4:45 am on June 3rd Arne, Kip, and Dave started their climb from base camp under clear skies and calm winds. They ascended the Standard Route via the Huandoy/Pisco Col and SW Slopes with no difficulties. The team made the summit at 9:00 am and began their descent at 9:25.

Snow conditions off of the summit were consistent and ideal for skiing. An inch of warmed, soft snow overlay a firm base. Approximately 150 m below the summit the team stopped at a ramp leading to Pisco’s S Face, a 400m 50-55 degree slope of snow and rock. The S Face was a feature that the team had observed and discussed during the two days prior to their climb. At 9:45 am, after some discussion, Arne decided to descend the ramp to assess the snow conditions of the face. He made a few turns down the 40-degree ramp in soft conditions before encountering hard snow or ice. Arne attempted to traverse onto the S Face to what appeared to be softer snow. Conditions on the face remained firm and the team noticed Arne accelerate. His downhill ski released causing Arne to fall out of Kip and Dave’s sight.

Not able to see Arne or the entire S Face, Kip and Dave tried to make verbal contact with no success. Realizing self-arrest was highly unlikely, Kip and Dave descended the route of their ascent knowing it would be the safest, fastest way to reach Arne. At 9:55 Kip and Dave encountered a guide and client just below the Huandoy/Pisco Col and informed them of the accident. At this point Kip and Dave roped up and began to traverse/skin, maintaining a high route under Pisco’s S Face through heavily glaciated and crevassed terrain. At approximately 10:55 am they found Arne beneath the face. Upon thorough examination Arne had sustained head trauma despite wearing a helmet.

We're all still reeling from this tragic news. Even though a number of us here at Patagonia have lost friends in the mountains, the loss of Arne is painful and shocking. A simple post such as this really can’t put into words the sadness we feel from losing a friend that was so young, strong and talented. He’s going to be missed by everyone here at the company. Hopefully we'll be able to share more in the coming days.

Tribute to Arne Backstrom from Warren Miller on Vimeo.