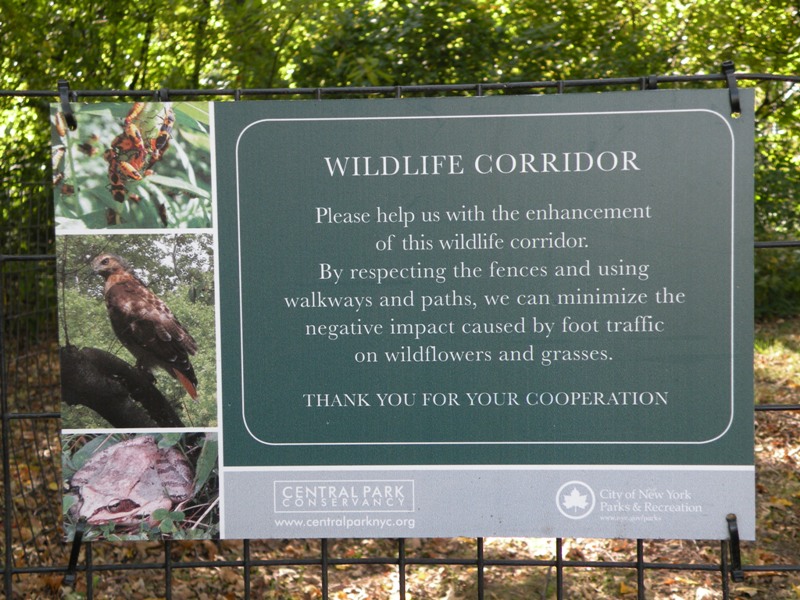 When we talk about Freedom to Roam it's impossible to make an argument for wildlife corridors without mentioning the obstacles that block an animal's ability to go where it has to go in order to survive. The obstructions we often cite include housing sprawl, energy and resource extraction, population growth, expanding urban areas, and highways and freeways – pretty large scale stuff. On the Backyard Corridor level however there are a myriad of smaller obstacles that must be taken into account as well. Hence, this week's question:

What obstructs animal movement in your neighborhood?

Please share your observations in the comments on our blog, The Cleanest Line, or on Patagonia’s Facebook page. Unfortunately, the stories about these obstacles typically aren't pretty, as Martha Sherrill illustrates below. [Wildlife corridor sign in Central Park, New York. Photo: Tom Skeele]

I’m not sure when the turtle discovered our vernal pond. One day I noticed his head sticking out of the water – slim, pointy, a completely different shape from all the frogs’ broad heads.

He panicked easily, was shyer than the frogs. For a month or two, he spent his days basking in the sun on a mud island in the middle of the pond. He was yards away, protected by water, but if I moved toward the pond’s edge, he plunged in with a loud splash. Ker-plunk. I began watching him through binoculars from the kitchen window instead.

And I Googled him. He was a Painted Turtle, according to the New England field guides, sometimes called “sun turtle” for their love of basking. He had a red-orange throat – and a thin stripe of the same color was visible along the perimeter of his glossy dark green carapace.

I wondered where he’d come from. I wondered if he had a mate, or wanted one. He was a mere seven inches long, but he had won some kind of unseen conquest against the frogs and ducks for the mud island – and had created a stronghold there. The only thing that seemed to bother him was me.

Driving home one shadowy late afternoon, a truck swerved on the road in front of my car, then slowed way down.  I slowed too – just in time to see a painted turtle, about seven inches long, crossing the road. The truck had been careful and missed him.

I wasn’t far from our house, so I wondered. Was that him? Our turtle? When it was safe, I pulled the car over, about sixty feet ahead, letting a couple of cars behind me whiz by. They’d been on my tail and anxious to speed up.

Maybe I could carry him back to our pond, I thought. Or maybe I’d just put him somewhere safe. I turned my car around for a rescue mission. Returning to the spot in the road where he’d been crawling along so obliviously, I found him again – smashed, carapace shattered, face pressed flat into the choppy surface of the asphalt, a gory pool of blood seeping out of him.

It was too awful to look at. But I did anyway. It was the only time he let me get so close. My son was wailing in the car; I bent down over our shy friend and did too.