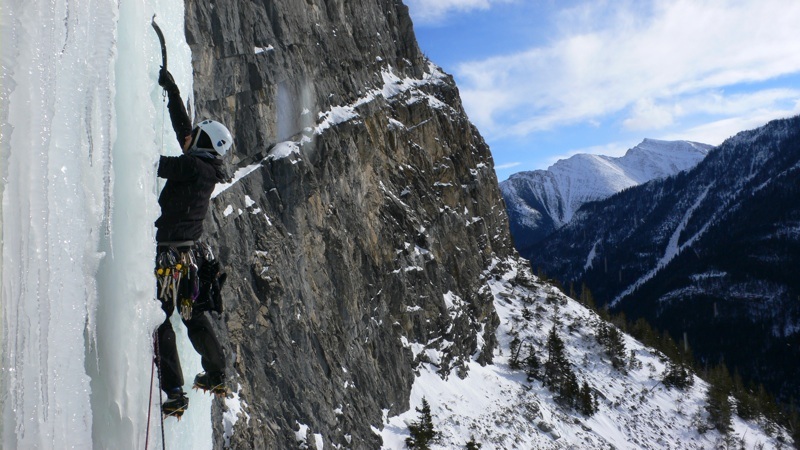 Patagonia friend, product tester, writer, disaster-style alpine climber, sleeping-bag spooner (and, ahem, senior editor of The American Alpine Journal) recently realized he's not keeping himself busy enough. Nowadays, that's as good a reason as any to fire up a blog. What makes Kelly's different and special? Of course you'll have to find out for yourself, but here's a teaser: true tales of under-funded, uninformed, seat-of-your-pants style climbing epics; insightful reflections on the nature climbing's 'beginner's mind'; and some of the most thorough-yet-readable gear talk you could hope to find from true luminaries of the sport. Here's one of Kelly's first posts to his new blog – and here's to hoping it inspires you to get your weekend started a little early:
_________________________________________________

Just returned from a great weekend in Joshua Tree – not much personal climbing, but that’s OK. Sometimes it’s not about that.

The Friends of Joshua Tree puts on this cool little event, and Patagonia sent me to teach clinics and do a slide show, ironic as it may seem since the event is named “Climb Smart.” Midway through my show, it struck me that all of my best stories – the ones you naturally tell when giving a show – have very little to do with being smart. For the clinics, though, I tried my best to help and to teach, and I brought my A-game safety-wise, which I can do. After all, I’m the guy who Josh Wharton accused of “AMGA-ing the anchors” on Shingu Charpa. (“Sorry dude,” I remember saying early on the climb, “I’ll make ‘em sketchier and faster” – he was right…)

The coolest things about these events are the passionate beginners. Un-jaded and ego-less, eyes wide open, trying their hardest. Everything new, the opportunities unlimited – it’s the beauty of the beginner’s mind. I love it when people have personal breakthroughs, those “Aha!” moments. Such moments are universal, no? We all have them at our individual levels in our individual pursuits, and someone else usually helps us. Remember some of yours? What have they been? 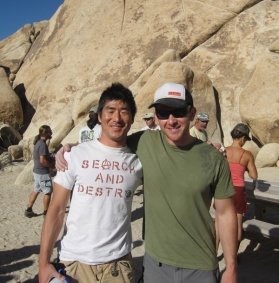 A young man named Takashi came to the J-Tree event – it was his second time climbing outdoors (his first was at last year’s Climb Smart). He’s polite and quiet, smiles a lot, and has a thick Japanese accent that’s stuck with him since immigrating to the U.S. 12 years ago. And he’s game. I think he took all six clinics over the weekend. Many others skipped out, taking breaks to head for the shade – understandable, as it was unseasonably hot and all of the clinic climbs roasted in the sun. Takashi kept smiling, sweating bullets, and kept climbing. The last clinic of the weekend was a bouldering clinic put on by an awesome guy named Mike Duncan from Black Diamond. Takashi took Mike’s clinic last year, too, and kept trying a particular boulder problem, but he never got it. This year he tried again, with Mike’s coaching, and then he tried some more. Still, no dice. Hot, sweltering rock, and the end of a big weekend. Late in the day, everyone else had packed-up and left. Takashi, seemingly reserved by nature, thanked Mike for his time and politely retreated. Except Mike would have none of it, insisting that Takashi try again. One more try. And so Takashi smiled, gently nodded his head, and took a big breath. He dipped into his chalk bag, stepped onto the rock, and tried his hardest. “C’mon, Takashi, you can do it,” Mike whispered. Mike cheered as Takashi stuck the crux hold and topped out. As the afternoon sun baked the Joshua Tree landscape, Takashi stood atop the boulder, pumping his fists into the desert air and smiling to the sky.