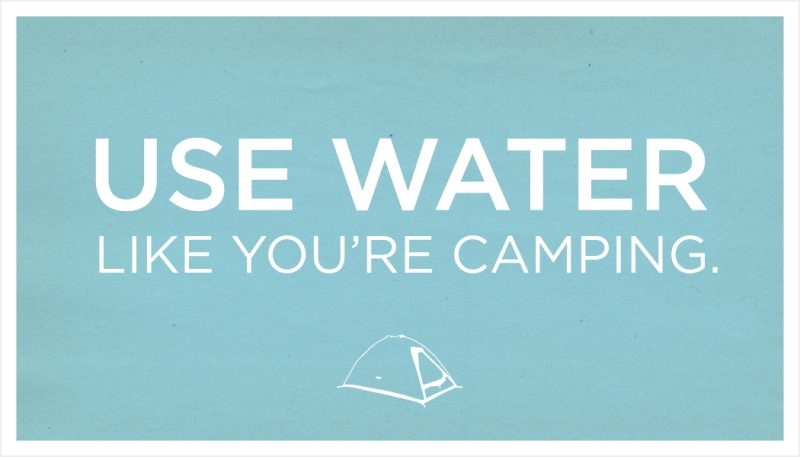 We got a waterless urinal a couple of months ago here on the second floor of the Crystal Palace at Patagonia HQ. It’s saving a lot of water, but smells a bit unsavory. One guy likened the odor to that of restrooms in bus terminals. Another said it was a Third-World experience without the cultural cross-references.

I recently sprained my ankle mountain biking and have been icing it at work to reduce the swelling. After my first icing, I dumped the bag of melting ice into the bathroom sink. I know, it was wasteful. But thankfully, a colleague more thoughtful than me took it upon himself to shovel the ice into the waterless urinal.

It seemed to help with the odor in a way the deodorizing wick and aerosol spray sanitizer that arrived with the waterless did not, so I’ve been dumping subsequent bags (a couple a day) directly into our new pissoir. Someone suggested adding limes to the ice like they do to margaritas – and some urinals – in Mexico. But I think our facilities department would frown on that.

[All graphics by Cleanest Line reader Michael Buckley. Says Michael, “When I brush my teeth, I try to remind myself to brush like I do whenI’m camping (to conserve water). These cards are meant to be printedout and placed where you could use the same reminder.”]

Our facilities department bought the urinals as part of an ongoing effort to green the Patagonia campus. They cost $450 each. I don’t think that included installation. There was a rebate program, but Ventura County gave all the money away before we could get any. Seems waterless urinals are popular here, or there’s not much subsidy money. Probably the latter.

We have 14 guys working here on the second floor. I reckon they average three trips a day to the bog. Doing the math, at a gallon a flush we’re saving at least 42 gallons of water each day, 210 gallons a week, 840 gallons a month. We’re not here 12 months out of the year, figure 11 on average. Conservatively that’s 9,240 gallons of pure, potable, life-sustaining water a year from our one urinal! And we have three others here at Patagonia HQ, all of which see a steadier stream of use than ours. 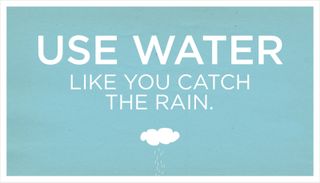 By one account, the first waterless urinal was patented a hundred years ago in Austria (another said it was 115 years ago and in Switzerland), but the flush urinals that followed were a lot more popular. The technology has likely improved quite a bit, but it’s estimated that today just 1% of urinals used worldwide are waterless.

For those who have never taken a quiet moment to contemplate the wondrous workings of a waterless urinal, they’re actually pretty simple. Here’s an excerpt from an equally simple explanation as to how they work found onGreenline blog.

“Waterless urinals all use basically the same science. Urine flows down the bowl of the urinal past a debris-catching strainer. The urine then passes through a sealing liquid, usually a specially designed oil-based fluid or simple vegetable oil, and collects in the waste pipe below. The different densities of urine and oil (urine is denser than oil – oil floats!) mean that the urine sinks through the sealing liquid and the oil floats on top of the layer of urine below. Any air bubbles rise to the top and escape leaving the urine in a relatively low oxygen environment. Odor is therefore trapped below the oil layer and cannot find the nose of bathroom occupants.”

Well, not all occupants. One user on our floor says he’s taken to shallow mouth breathing while staring at the bathroom wall. Another sidesteps the waterless and uses the commode instead.

To be fair, an informal poll of other waterless urinal-users elsewhere on the Patagonia campus reveals they’re sold on the new technology. Maybe it’s just the lack of ventilation in our windowless bathroom or because our urinal wasn’t getting enough love from the maintenance crew.

The maintenance crew has been alerted to the odor issue and the need to clean with the greatest of care, as waterless urinals tend to be, well, a bit splashier than their watery brethren. And I for one am willing to reserve judgment about the wider world of waterless urinals for a while longer, because the concept is so right. And could so many guiltless users be wrong? High-use facilities like LA’s Staples Center arena and Nokia Theater have gone waterless, as have some airports and train stations.

Just in case though, you might want to bring a bag of ice. And maybe a few limes. 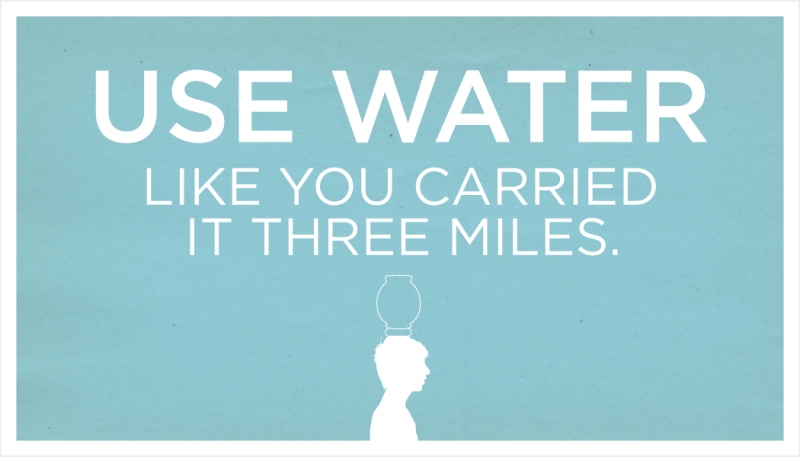 Besides saving water, there are a slew of other compelling reasons to go waterless cited by waterless urinal makers and aficionados.

Why fore the odiferous waterless?

There are You Tubes for everything, as evidenced by this one on waterless urinal maintenance.

For one on men’s restroom etiquette (not for the easily offended): Google it.

Editor’s note: Our thanks go out to Michael Buckley for sharing his “Use Water” graphics with us (apologies might be more appropriate since he didn’t know they were going to be attached to a post about urinals). Michael is an artist and designer currently based in Amsterdam. If you have a moment, check out his beautifully simple hand-built Corten Barbeque. It reminds me of something that might have come out of the Tin Shed during the early days of Chouinard Equipment Co.