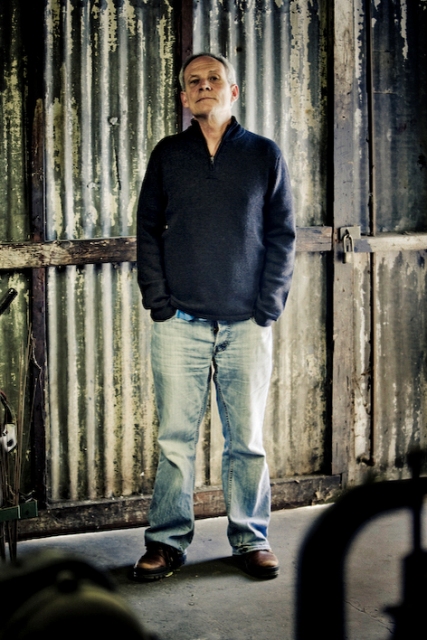 Craig Holloway is back with another insightful interview. This time around Craig chats with Vincent Stanley, who’s been working with his uncle, Yvon Chouinard, for the last 35 years (on and off). Vincent is currently the head writer and editor for Patagonia’s marketing team. [Photo by Tim Davis]

CRAIG: You have been employed with Patagonia on and off for the past 35 years. What is the one thing at Patagonia that has stayed the same all the years that you have been here?

VINCENT: That it’s more than a business. There’s even a phrase now for companies like ours, for-profits who care about other things: social enterprise. A social enterprise is said to wend a path somewhere between that of a conventional business and an NGO. Back in the early seventies no such thing was considered possible. We were a social enterprise before you could name it.

CRAIG: In one word – describe what the Chouinard family means to you.

VINCENT: Home. I don’t seem to feel at home anywhere fully but I do when I’m with my family. I’m a Chouinard on my mother’s side. Yvon was my boyhood hero and later, after I came to work here, mentor. Our lives – his and Malinda’s and Nora’s and mine are interwoven many ways, by our shared experience as family, by all these years at Patagonia, and finally as friends. We and a few other old friends from the company – like the Ridgeways – share a worldview; everyone’s is a bit different but close enough.

The Chouinards by the way are all formidable storytellers. If Aunt Doris had become a writer I’d have had to retire my pen.

VINCENT: I work on The Footprint Chronicles™ and I’m learning much (after so many years here!) from my colleagues about how the clothes are made and what the challenges are. We tell a better, truer, more useful story when we talk about our challenges and shortcomings than when we simply praise ourselves.

We can never forget that we are not a model of environmental sustainability; we’re a small but industrial-scale company trying to eliminate the egregious harms we do in the course of a day. To illustrate the point: some of us may call this building a campus but the clothes are made in factories. And when you deal with industrial-scale activity the left hand does not see the right hand work. So first you have to learn what you’re doing, as we did 17 years ago when we commissioned a study on the environmental effects of our four major fabrics. As we’re doing now with The Footprint Chronicles to look at all our processes from design to shipping to collecting used-up clothes to be made into new fiber. Once you learn what the problems are, you have to articulate them to everyone involved – employees, customers, vendors, then take steps to eliminate specific harms as you identify potential solutions. Our storytelling ain’t just PR; it’s a critical step to making improvements.

VINCENT: A good editor helps the writer strengthen the connections and trim the waste; he/she advocates for the reader – and for the needs of the piece itself, which a writer can miss. Editorial skills require seemingly contradictory gifts: the long view to help organize the material and its flow toward a conclusion, and a talent for detail when it comes to fixing sentences.

CRAIG: You’re a fiction writer and also write poetry. Why do you invent stories and create poetry?

VINCENT: The impulse to write a novel or poem is similar but the two forms have a different relation to time. A novel takes 10 to 15 hours to read, usually stretched out over days, a lyric poem a few minutes in a single sitting. A novel makes a world that changes over time; the poem creates the illusion of a moment. I love playing with time and character over the course of a long read. And I love creating something outside time that the reader can see at once. That I can see at once.

CRAIG: As a writer do you find writing near a window to be a distraction?

VINCENT: Only if the view is beautiful. I lived at Mondo’s on the beach for a few years but worked at a window facing my neighbor’s house. In Santa Barbara I face the street, the light filtered by a lovely old cork oak. In New York, we’re high up. I’ve faced the desk away from the view of the Village and the storms that come through. Nora and I try not to talk until we’re done with our work, but every once in a while one of us will notice an exceptional sky and call out “Light alert.”

CRAIG: Are you currently working on a novel or a poem? Care to share with us what you’re writing about?

VINCENT: I’m working on the third novel now; the first tells the stories of a blacklisted Hollywood screenwriter and his family from the forties to the nineties, the second that of a cold warrior diplomat (and second-rank poet) and his brood; the third links the two, as will the fourth. Each advances about seven years through time…

For a while I was working on a poem cycle, but if I still am I no longer know what the cycle is about. I write a few poems a year.

CRAIG: Is it painful to let go of the characters you write about after you have finished telling their story?

VINCENT: Oh yes. Though I’m writing four linked novels so I have the luxury of returning to key characters. Though some of my favorite characters are getting so old now I have to put them out on the iceberg and wave goodbye.

CRAIG: What is it that you admire and like about the people that work at Patagonia?

VINCENT: Their spirit, intelligence, unconventionality. Even people who wouldn’t define themselves as unconventional: scratch the surface and you’ll find a strong individual life story and a hunger for a community as well, but a community that strengthens rather than violates the individual. I respect the seriousness of so many people’s outside interests and passions, and the openness of the culture, the lack of meanness most days. I also love the self-corrective quality of the culture. People can make changes here, but the culture itself changes people coming in. It did me. And continues to.

CRAIG: You spend three months out of the year living and writing in New York City’s West Village with your wife and writer, Nora Gallagher. Does the city’s energy afford you a different writing experience than writing from your home in Santa Barbara?

VINCENT: The writing goes the same. Re-entry is different. I often get up from the desk in a kind of fog. At home, when I can I take the train into work, and something about its rhythm clears the mind. I love to read or edit on the train. In New York I just walk out on the street and it’s so other; in that way it’s like being in the mountains. We benefit in New York too from having friends here and the thick cultural life, having so much outside the door you can reach on foot. And I like not having to get behind the wheel of a car for a month at a time.

CRAIG: How do you define writer’s block?

VINCENT: Have you ever had trouble getting out of a warm sleeping bag on a cold morning? Writer’s block feels like that. You have to just get up, or in the case of a writer, sit down and get going.

CRAIG: Are you hopeful that Patagonia will still be in business fifty years from now inspiring other businesses to do less harm to the environment?

VINCENT: The big test – of the strength of this culture – will be the passage from the scene of Yvon and Malinda. Patagonia of course is quite likely to be around in 50 years as a brand and as a company. It won’t be easy for the culture alone, without its founders, to keep Patagonia worthy. It’s up to all of us to help create, continually create, the company we believe in. We’ve got a shot at it, more than most American institutions do. And we now have a fine second, even third, generation of leaders who want the same thing.

VINCENT: Work at what you love to do. And love the work you have to do. I think some younger employees here taught me that, though maybe long ago.

We’re grateful to Craig Holloway for encouraging Vincent to share his thoughts. Craig, like Vincent, has a long history with the company. He came to work for Patagonia in 1996 by way of Chicago. He spent his first year and a half in Mail Order Customer Service, and lived in the wide-open, public-transportation-devoid spaces near Reno, Nevada, without a car. He ran to and from work over the high-desert hills. On snow days he would ride in to work with a Patagonia roommate and run home in the dark. Craig has played a number of roles in Ventura – as customer-service person extraordinaire at Great Pacific Iron Works, as marketer for what was then called the Endurance line, and now as editor and master of the encyclopedic Patagonia workbook and other projects, including blog interviews.

Craig now owns a pickup truck, but drives it sparingly. He gave up steady running in favor of a steady yoga practice (which includes teaching), but still heads out into the backcountry, hiking till dark.

Craig’s past interviews:
Krissy Moehl Talks Hardrock 100
Once Upon a Wetland

Time to hit the road and get the weekend started. Have a good one everybody. We’ll leave you with a poem by today’s interviewee, Vincent Stanley:

Who flung the mustard pot, stained the hills a gingered sun?
Who gave spring its only name?
Who made the roll of hills a flank and inked in the brown
black of cow or raised its lowing head?
Or carved into the cliff the whistle of the train
or invoked seven fish in a bouillabaisse as Mediterranean?
Or choreographed the tips of the grass?
Who took the sting out of the breeze or let linger the nose of
wine at the table after we sobered, who etched those lines in
our faces, softened our flesh our sorrows? Was it being or
being back of that? Or life in its instance, as in the upward
wheel of the white egret, its beat of hesitation before
wings unfurl in the push from green to blue, and the
buoying, as our bright afternoon abloom lifted us, old
friends enough for long enough. 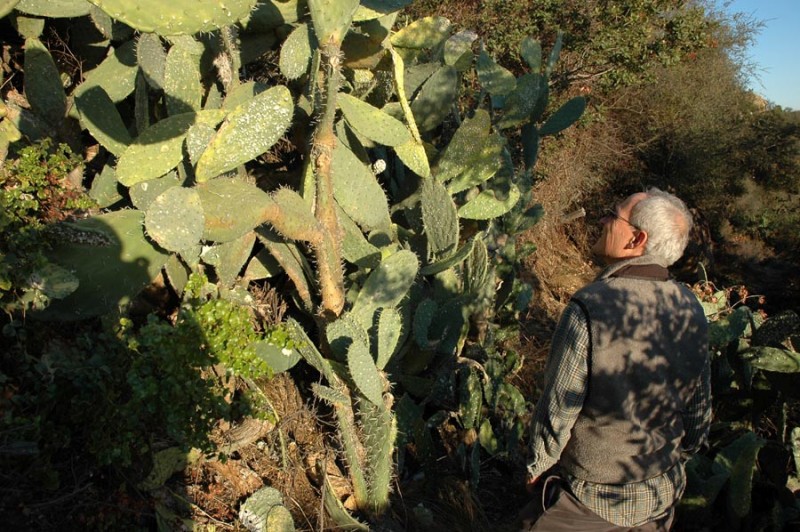